Starting at the southern tip of Spain, our class of 12 students first met [for our Study Abroad experience] in the coastal city of Malaga.

Starting at the southern tip of Spain, our class of 12 students first met in the coastal city of Malaga. Known for its Moorish historical roots, Malaga proved itself a fitting gateway for the coming events of our long journey ahead.

One of our first experiences as a group was climbing the hillside gardens of the city’s Alcazaba, which claims its origins as far back as the 11th century. At the peak of our hike, we found ourselves within the walls of the equally impressive Gibralfaro Castle, providing us with our first of many
breathtaking views.

Perhaps the most interesting feature of all, however, was the city’s interactive waterfront, Muelle Uno. Featuring top of the line shopping and dining options, this promenade along the harbor connects a modern coastline to a historically ancient city, which prompted us to think very differently about design and its associated context. 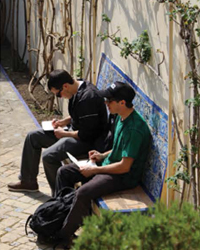 After two days in Malaga, it was time to move on to Seville, where ancient Mudejar traditions are fused together with a lively, urban streetscape to create a stunningly diverse environment throughout the city. This is also where we began our overseas curriculum led by Dr. Pat Crawford, which consisted of three core classes: Design Development, Field Studies, and Drawing as Knowing.

Historically speaking, the Alcázar de Sevilla and Plaza de España are the prominent landmarks of the area. Fittingly enough, our first field study challenged us to compare and contrast the two sites, with quick sketches to reinforce our findings. On the opposite end of the spectrum, we were able to also visit the world’s largest wooden structure, the Metropol Parasol, which is widely accepted as one of the finest examples of contemporary architecture today.

Transitioning to the more rural Granada, our area of study was focused on what many consider to be the most beautiful and well-preserved castle in all of Spain: La Alhambra.

Planned as a two-day visit, we had the opportunity to explore all 26 acres of the acclaimed “city within a city.” Built in the 11th century by the Nasrid Dynasty, its original Moorish elements have transformed as power has shifted hands over time. The evolution of this change is readily seen through the major areas of the fortress: The Generalife Gardens, the Three Palaces, and the Alcazaba.

Outside of Alhambra, the city itself remains true to authentic Spanish form, with cobblestone walkways alongside endless local shops and cafés.

Continuing with Dr. Crawford, our last stop in Spain was Barcelona, where we spent much of our time exploring the countless works of the world-renowned Catalan architect, Antoni Gaudi. Whether it was Casa Milà or Park Güell, or even his final project at la Sagrada Família, Gaudi’s attention to detail in each of his designs never ceased to amaze us all. While many of his most famous works lie north of the city’s center, his earliest works can be seen along the southern boulevard to the sea, la Rambla.

As the focus of our second field study, La Rambla stretches about a mile long from Plaça de Catalunya to Port Vell and is widely considered to be Barcelona’s cultural core, with local food markets, souvenir vendors and street entertainers scattered throughout.

On our final day, we traveled by train to the foot of Montserrat, which is a multipeaked mountain located about an hour northwest of Barcelona. In order to reach the peak, we traveled by a combination of cable car and funicular railway to the top. Distinct from the many sites on our trip, hiking Montserrat was unique in that it was our first true opportunity to enjoy entirely natural beauty, and it most certainly did not disappoint.

Following our journey through Spain, we then traveled by train to Italy, where we spent our first few days off in Oulx and Florence on our own. Beginning at the start of Holy Week, our group met with Dr. Patricia Machemer in Rome, resuming our programming once again. Situated in the Trastevere district, we were within walking distance of the center of the city, which allowed us more time to see the many wonders the Italian capital has to offer.

Before exploring Rome’s more central attractions, we first took a day to study the picturesque gardens at Villa d’Este. As the site of our third field study, this 16th century Renaissance gem encompasses a seemingly infinite number of fountains, grottoes, and uniquely hidden meaning.

Heading back into central Rome, the ensuing days featured all of the classic Italian marvels: The Colosseum, the Trevi Fountain, the Pantheon, the Roman Forum and the Spanish Steps. While some of us were able to visit St. Peter’s Square toward the end of the week, entrance into the Basilica was near impossible due to the large number of visitors during Holy Week.

Aside from visiting the many sites, much of our down time was spent enjoying the incredible food surrounding our hostel. Whether it was their world famous pizza or endless scoops of gelato, Campo de Fiori was our go-to destination to satisfy the indulgences. 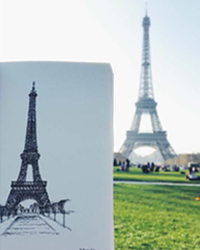 From one beautiful city to the next, our group moved on to Paris, where we began with a day trip to one of the most famous gardens in the world at the Château de Versailles. Setting the standard for French formal gardens, Versailles demonstrates near perfect symmetry on both sides of its strong, central axis. This design scheme is carried out throughout the city as well, known as the Axe Historique or Historic Axis of Paris.

Our fourth field study challenged us to investigate the nearly five mile stretch, which runs through some of Paris’ most celebrated monuments and squares. Built along the Avenue des Champs-Élysées from Le Louvre to the Arc de Triomphe, the city’s historic axis has remained intact since the 17th century.

More recently, the historic axis has since been extended westward to the city’s isolated business district, La Défense, which features a modern rendition of the Arc de Triomphe, named La Grande Arche. While many of Paris’ famed monuments reside along the historic axis, the most famous of them all, La Tour Eiffel, lies just to the south.As a class, we had the opportunity to scale the Iron Lady by day and view its golden illumination by night.

Known for its vast array of irresistible desserts, Paris makes a good case for the title of best food on our trip, with crepes, croissants, and their worldfamous macarons to name only a few. 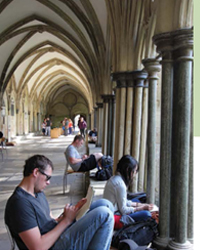 Travelling through the Chunnel into England, our next couple of weeks were spent in the iconic city of London. With five weeks abroad already on the books, London was great in the sense that it provided a little taste of home for many of us. Perhaps a distant cousin to American cultural norms, the English way of life created a comforting environment in which to learn and explore its depths.

Our first day featured a visit to St. Paul’s Cathedral and the adjacent Millennium Footbridge. From there, we walked south along the River Thames to see Big Ben and the Palace of Westminster, which is home to the House of Commons and Lords of the United Kingdom.Our day then concluded at one of London’s cultural centerpieces, Trafalgar Square, where many of their most popular community events take place each year.

Next, a trip to the shopping districts of Camden Town and Covent Garden ensued. With one area boasting a more modern, upscale appeal and the other catering to a more local flavor, the two spaces ultimately function as one array of options for all types of visitors.

Early the following morning, we embarked on a two-day journey to the town of Salisbury and travelled by bus to Stonehenge. The long walk from the visitor’s center to the sacred site was well worth the effort, as these 5,000-year-old stones were incredible to see in person. From there, we made our way back to visit Salisbury Cathedral, which is one of the finest examples of Early Gothic architecture in existence today and home to the best preserved copies of the Magna Carta.

With so many beautiful places to explore scattered throughout England, travelling long journeys by train was commonplace, as we took day trips to study Stourhead, Blenheim Palace, and Alnwick Gardens.

Our final field studies were concentrated on two widely contrasting topics: The dynamics of Hyde Park and the presence of contemporary architecture throughout London. Originally created as a hunting ground in 1536 by Henry VIII, Hyde Park is made up of more than 600 acres of public green space, with the Serpentine Lake as its social centerpiece.

Contemporary architecture, on the other hand, has become an integral part of London’s aesthetic identity over the years. From the Gherkin to City Hall, over to the Shard, and on to King’s Cross Station, London’s continual fusion of old with the new is undoubtedly among the best in the world.

After a short plane ride from London to Tallinn, the reality had finally set in: Our trip was nearly complete. Seven blazing fast weeks spent exploring some of Europe’s grandest wonders had already gone by, and Estonia may have been the most surprising destination of our entire journey. Unlike the more distinguishable cultures of Spain or France, our perception of Estonian culture was untainted. We really had no idea what to expect.

Starting in Tallin and moving on to Tartu, we had the opportunity to meet several students in Landscape Architecture at the city’s university. With Estonian independence from Soviet Russia occurring in 1991, the fresh sense of cultural pride was profound throughout the country. After getting  familiarized with its major cities and accompanying cultural norms, we travelled as a group to the small town of Sillamae, located just a few miles from the Russian border.

Our three-day charrette focused in on the existing waterfront of the town and challenged us to come up with innovative solutions to solve its barriers to
accessibility. Our final day concluded with a beautiful sunset over the Baltic Sea. In many ways, Estonia reminded us all of home, which made it a fitting end to this incredibly life-changing journey.

For those considering study abroad in the future: Absolutely do it. It is an experience that you will certainly remember for the rest of your life.

From Eye to Heart: Exterior Spaces Explored and Explained