Hoophouse grows food year round, which then goes to dining hall, and that compost goes back into hoophouse. 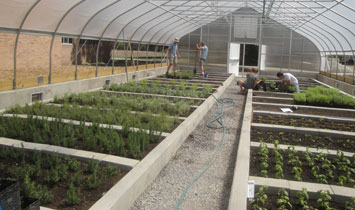 Michigan State University students are experiencing food production, food consumption, and food waste recycling in an instructive example of a sustainable food cycle. Students are learning how a local food cycle can help instill environmental responsibility, and create healthy citizens and healthy farms for the future.

Last summer on the campus of MSU, a new greenhouse was constructed as part of Bailey Hall’s renovation in the Brody Square complex, named the Liberty Hyde Bailey GREENhouse. Located on the grounds of Bailey Hall, the structure is a hoophouse, or passive solar (unheated) greenhouse, that extends the growing season (and increases food production) all year, even in Michigan’s northern climate. Planned for growing culinary herbs and greens to supply the Brody Square complex and the State Room Restaurant in the nearby Kellogg Hotel and Conference Center, the Bailey GREENhouse is also providing a rich educational experience for MSU students.

This project was made possible through a partnership between MSU’s Division of Residential and Hospitality Services – including the Office of Campus Sustainability and the MSU Surplus Store and Recycling Center; the Residential Initiative for the Study of the Environment (RISE), a living-learning residential program housed in Bailey Hall; and MSU’s Student Organic Farm which has championed hoophouse technology for the past 10 years. It has also helped to cultivate a strong partnership between operations and academics at MSU.

The plants grown in Bailey GREENhouse are tended by students of the RISE program. The herbs and greens are grown in soil with composted pre-consumer food waste from Brody Square — closing the food cycle loop (the movement of food from farm to fork and the return of the appropriate food residue to the farm) by returning organic matter and essential plant nutrients to the soil. This example of a sustainable food cycle is exposing the students to new models of food production, including the process of worm composting or vermicomposting.

Vermicomposting at MSU’s Student Organic Farm has grown into a large-scale activity in the past few years. In 2010, a research project investigated the feasibility of worm composting campus kitchen food preparation residue at the farm in order to close the campus food cycle loop. Research demonstrated that the same technology that allows us to harvest vegetables all winter can also allow worm composting through the winter to process food residue into valuable compost for growing more vegetables. Now, as produce from the farm is delivered to campus dining halls, food scraps are picked up and brought back to the farm to be composted, minimizing the amount of waste thrown out by the dining hall and providing compost for the farm and now the Bailey GREENhouse.

Many herbs are being grown in the Bailey GREENhouse this winter, including cold-tolerant types such as sage, rosemary, thyme, oregano and parsley. In the warmer months, basil, cilantro, tarragon, dill and mints can be grown. From August through early December, the crops in the 30-by-72-foot structure have yielded about 130 pounds of herbs and lettuce.

Liberty Hyde Bailey, considered America’s father of modern horticulture, was best known for the botanical study of cultivated plants. He graduated from Michigan Agricultural College (now Michigan State University), and was instrumental in starting agricultural extension services like Michigan State University Extension. How fitting that the newest hoophouse on the campus of MSU, demonstrating advancements in plant culture through season extension technology, is named after him.