Scout for mummy berry shoot strikes to determine the need for fungicide sprays.

Mummy berry is caused by the fungus Monilinia vaccinia-corymbosi. Susceptible blueberry cultivars such as Blueray, Jersey, Rubel, Bluegold and Rancocas that are grown in wetter sites typically have the most disease pressure. In the last couple of years, however, mummy berry has been less prevalent than before. This may be due to lower amounts of overwintering inoculum since the hot, dry summer of 2012 or improved fungicide programs implemented by blueberry growers. However, we can’t rest on our laurels, because the right weather conditions can bring the disease back to previous levels within several years if no preventive measures are taken. That said, if disease levels were low or nil in a particular field in 2014, the risk of infection will be substantially lower than at sites with moderate to high levels of mummy berry the previous year.

The first stage of the disease cycle – the infection of young shoots by ascospores produced in apothecia on mummified fruit – has occurred and shoot strikes have been reported from various locations. Shoot strikes are characterized by blighted leaves with gray sporulation on the petiole and upper part of the main vein, and a distinct grayish-brown pattern along the main vein. Spores (conidia) produced on these tissues are attractive to bees and flies, which inadvertently carry them to blueberry flower stigmas. These spores then germinate on the stigma, grow down the style and subsequently invade the fruit carpels where the fungus grows undetected until fruit ripening. Doing a good job in controlling shoot strikes is 90 percent of the effort in preventing fruit infection. 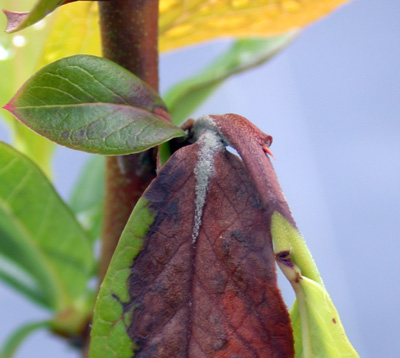 Blueberry flowers are most susceptible to conidial infection on the day they open and susceptibility declines over about four days. In addition, conidia are most infectious on newly formed shoot strikes, but can remain viable for at least a week. Under cool, cloudy conditions the conidia don’t desiccate as fast and may remain viable longer. A prolonged bloom period and good pollinating conditions can extend the infection window and increase fruit infection risk.

To decide whether mummy berry fungicide sprays are needed, Michigan State University Extension recommends growers monitor their fields for the presence of shoot strikes. If no shoot strikes are seen during scouting activities during the bloom period, no control measures may need to be taken, although there is a potential risk of infection if fields with mummy berry are located within 0.5 to 1 mile (you will need to assess the likelihood of bees traveling from the infected field to your field, they will probably only do so if there are limited food resources near their hives). If you have anywhere from one to five shoot strikes per bush, fruit infection levels will likely be low to moderate, whereas  higher numbers of shoot strikes can result in moderate to high levels of fruit infection.

As an example, in our past fungicide efficacy trials we have found that an average of 16 shoot strikes per bush led to about 18 mummified berries per bush (Berkeley, 1999), 30 to 45 mummies per bush (Jersey, 2011, 2006) or 172 mummies per bush (Rancocas, 2011). Part of the difference lies in the inherent susceptibility to fruit infection of the cultivar (Rancocas being particularly susceptible) and part of it lies in the conditions for infection, with late shoot strikes with fresh conidia in the midst of bloom, an extended bloom period and good pollinating conditions increasing fruit infection risk.

Another important decision is what fungicides to use in your mummy berry control program. Assuming you have done a good job in controlling shoot strikes and have a careful and thorough scouting program, you may be able to reduce the need for fungicides for mummy berry control during bloom. If you decide you have to spray during bloom, it is advisable to spray at night to avoid direct bee exposure to fungicide spray residues. Also, since the stigma is a very small target to protect and also well protected by the corolla, we have to get the fungicides inside of the flower parts to achieve good control of infection. Systemic fungicides, therefore, tend to be more effective at preventing fruit infection. Sterol inhibitors such as Indar (fenbuconazole), Quash (metconazole) and Proline (prothioconazole) are effective as well as Pristine (pyraclostrobin + boscalid).

For organic management of mummy berry, the fungicide Regalia (giant knotweed extract) is recommended in a tank-mix with Double Nickel 55 (Bacillus amyloliquefaciens) or Serenade (B. subtilis). The active ingredient in Regalia stimulates natural plant defenses to infection, while the bacteria in Serenade and Double Nickel can stop spores of the mummy berry fungus from germinating.

Dr. Schilder’s work is funded in part by MSU’s AgBioResearch