Last week mummy berry shoot strikes, a result of ascospore infection of emerging leaves, were seen for the first time this season in four blueberry fields that are scouted as part of an IPM project (though there were some reports of shoot strike sightings at the end of the previous week). Shoot strikes are a blighting of developing leaves and shoots which often exhibit an “oak leaf” pattern of necrosis (Figure 2). All scouted plots were at late pink bud or early bloom. Declining mummy berry mushrooms (apothecia) that had already released their ascospores were observed at many of our plots (Figure 1). This week the plots had reduced numbers of apothecia when compared with previous weeks. Last week the average number of functional apothecia in Grand Junction was as high as 11.2 per bush (Grand Junction), but this week the average only reached 1.4 per bush (Grand Junction), indicating that the apothecia had started to decline. Shoot strikes begin to appear about 12 to 14 days after the initial infection, depending on the temperature.

To get an estimate of the incidence of shoot strikes, pick five to ten random bushes and record the number of shoot strike infections per bush. The number of shoot strikes can range from 0 to over 100 per bush in a bad year. Shoot strikes can be identified by the brown oak leaf pattern along the veins of wilting leaves and a layer of gray powdery spores on the upper part of the leaf and petiole. Also, shoot strikes generally do not exhibit browning of the wood beyond the green tissue of the infected shoot. They can occur anywhere on the bush but are sometimes more plentiful lower in the bush. Flower strikes are much less common than shoot strikes and would normally not be present in the absence of shoot strikes. Flower strikes may be distinguished from other blights by the dense gray spore masses on the flower stem. Some cultivars are more susceptible to shoot strikes/flower strikes and less susceptible to fruit infection, whereas others are just the opposite. Susceptible varieties include Berkeley, Blueray, Bluetta, Bluehaven, Jersey, Rubel and Northland.

As bloom ensues, growers need to consider applying fungicides to protect the flowers from infection. Shoot strikes during bloom are epidemiologically most important as the spores produced on the shoot strikes have the most chance of reaching the flowers via bees transmitting the spores, wind and rain. Systemic fungicides, like Indar and Pristine, work better against mummy berry flower/fruit infection than protectants. Orbit, while an excellent fungicide to prevent shoot strikes, is not quite as effective as Indar against flower/fruit infection. 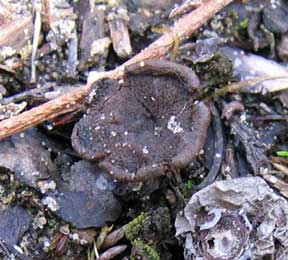 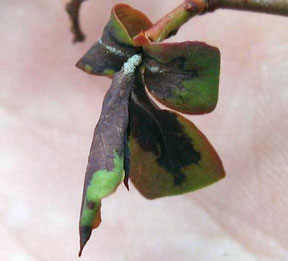 Figure 2. First shoot strike of the season observed
in Grand Junction, Michigan. Note gray sporulation
at the base of the shoot.