Naan is a traditional flatbread whose origins 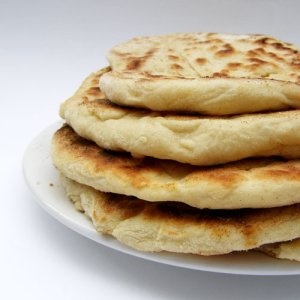 stem from Central, West and Southeast Asia. It is a staple food for those who live in the Northern part of the region. Tandoori Roti is a type of naan and is usually made out of whole wheat flour. Naan can also be made from all-purpose flour and yeast, and is normally round in shape because of how it’s cooked. Traditional naan is cooked in a clay oven called a tandoor. Naan was first served as a breakfast food in the royal court in Delhi back in 1300 A.D.

To reheat naan, use aluminum foil to wrap in packets of four or five pieces of bread and place in a 400 degree Fahrenheit oven for 10-15 minutes.