National Invasive Species Week 2016 is Feb. 21-27. Invasive species are plants, animals, and other organisms that are not traditionally found in a given location (in this case the Great Lakes) and are having a negative impact of some kind, whether ecological, economic, social, and/or a public health threat.

To help bring awareness to this week, each day Michigan State University Extension (MSU Exension) and Michigan Sea Grant are featuring two different invasive species (one aquatic and one terrestrial species) that have invaded or has the potential to invade Michigan’s environment. Today’s featured terrestrial invasive species is Mile-a-minute weed.

Mile-a-minute weed (Persicaria perfoliata). Mile-a-minute weed is a terrestrial invasive herb that is currently on the Michigan Watch list. According to the Michigan Department of Environmental Quality, invasive species on the watch list are priority species that have been identified as being an immediate and significant threat to Michigan's natural resources. Watch list species either have never been confirmed in the wild in Michigan or have a very limited known distribution, or are localized. In the case of Mile-a-minute weed, it has not yet been detected in Michigan.

Mile-a-minute weed is an herbaceous, trailing vine that has light green leaves that are distinctly shaped like equilateral triangles. Leaf undersides and stems are barbed. It produces a small inconspicuous white flower and its fruit is a deep blue color arranged in clusters. Stems have round, cup-shaped, leafy appendages called ocreas that surround the stem. It prefers to grow where light is plentiful, and can outcompete other plants for light by climbing over them. It prefers wet soil.

Native look-alikes and how you can tell them apart:

Similar to several species of tear-thumb (native and arrow-leaved), but leafy, expanded ocreas and blue fruit are unique to Mile-a-minute weed.

How long it has been here:

Mile-a-minute was introduced in the 1930’s

Mile-a-minute weed has been detected in the East Coast of the United States (Connecticut, Delaware, Massachusetts, Maryland, New Jersey, New York, Ohio, Pennsylvania, Rhode Island, Virginia, West Virginia, and Washington DC). It has not yet been detected in Michigan. The MISIN website shows the latest locations where this plant has been observed in the United States. 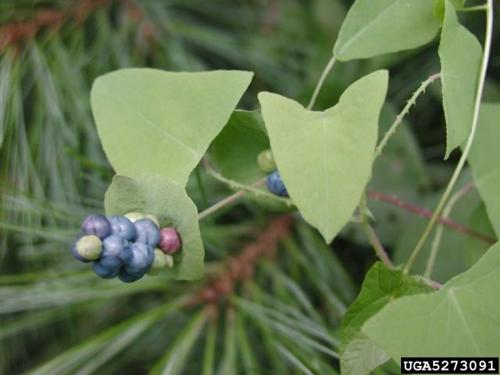 The fruit of Mile-a minute weed is deep blue in color and is arranged in a cluster. Photo credit: Leslie J. Mehrhoff, University of Connecticut, Bugwood.org

Mile-a-minute weed grows extremely fast and smothers the vegetation to which it attaches by limiting its ability to photosynthesize and therefore its ability to survive. It is also very effective at smothering tree seedlings.

Mile-a-minute weed reproduces via self-pollinated seed, which can survive in the soil for up to six years, making control challenging.

Mile-a-minute weed’s recurved barbs help it to attach to and successfully climb over other plants to reach sunlight.

Since Mile-a-minute has not yet been detected in Michigan, it is important to monitor open and disturbed areas as well as areas with wet soil such as roadside ditches, woodland edges, wetlands, stream banks, clear-cuts, and utility right-of-ways. Monitoring is best done early in the season when seeds germinate (late March- early April). Small populations can be managed by hand-pulling, mowing and cultivating which serve to disrupt flowering and seed production. Foliar herbicides with a surfactant that will allow it to adhere to Mile-a-minute’s waxy leaves have also been used.

Early detection and timely reporting of occurrences of Michigan watch list species such as Mile-a-minute weed are crucial to minimizing the spread and limiting negative ecological and economic impacts. It should be reported immediately to Sue Tangora, Michigan DNR Wildlife Division (tangoras@michigan.gov). Take several photos of the plant and make note of the location, date and time of the observation as this will be very helpful in the verification of the report. You may be asked to provide your name and contact information if follow-up is needed. You can also use the Midwest Invasive Species Information Network (MISIN) online reporting tool. MISIN also offers a smartphone app that allows convenient reporting from a phone.