To help bring awareness to this week, each day Michigan State University Extension (MSU Extension) and Michigan Sea Grant are featuring two different invasive species (one aquatic and one terrestrial species) that have invaded or has the potential to invade Michigan’s environment. Today’s featured terrestrial invasive species is Asiatic sand sedge.

Asiatic Sand Sedge (Carex kobomugi). Asiatic sand sedge is a terrestrial sedge that is currently on the Michigan watch list. According to the Michigan Department of Environmental Quality, invasive species on the watch list are priority species that have been identified as being an immediate and significant threat to Michigan's natural resources. Watch list species either have never been confirmed in the wild in Michigan or have a very limited known distribution, or are localized. Mile-a-minute weed has not yet been detected in Michigan.

Asiatic sand sedge is a course, yellow-green colored perennial sedge with a grass-like appearance. It grows to approximately 12 inches tall. It has a triangular stem characterized by sedges, with brown scales at the base. Leaves are often taller than the club-shaped flowering heads. Small ridges along leaf edges make the leaves feel serrated. It grows in dunes and upper parts of ocean beach wash flats. Flowers are arranged in a spike at the end of a triangular flowering stalk which develops into a single-seeded fruit called an achene.

Asiatic sand sedge is native to coastal areas of northeastern Asia (China, Japan, Korea, Russia). It was first sited in New Jersey’s Island Beach in the 1920’s. It was used to stabilize dunes and for its ability to hold up against foot traffic which causes trampling as well as for its disease and fungal resistance.

In the United States, it is found along the Atlantic east coast from Massachusetts to North Carolina. It has not yet been detected in Michigan. 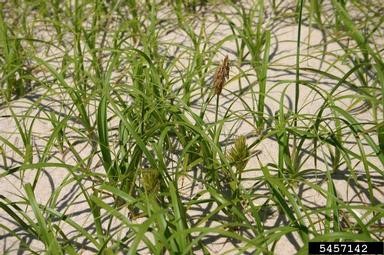 Asiatic sand sedge reproduces via a network of rhizomes which creates extensive colonies.

Small populations can be treated by completely digging up or hand-pulling individual plants, however, the entire root system must be removed or rhizomes will allow the plant to continue growing. Herbicide is used to treat large established infestations.

Early detection and timely reporting of occurrences of Michigan watch list species such as Asiatic sand sedge are crucial to minimizing the spread and limiting negative ecological and economic impacts. It should be reported immediately to Sue Tangora, Michigan DNR Wildlife Division (tangoras@michigan.gov). Take several photos of the plant and make note of the location, date and time of the observation as this will be very helpful in the verification of the report. You may be asked to provide your name and contact information if follow-up is needed. You can also use the Midwest Invasive Species Information Network (MISIN) online reporting tool. MISIN also offers a smartphone app that allows convenient reporting from a phone.