Researchers give long look at who benefits from nature tourism

Using nature’s beauty as a tourist draw can boost conservation in China’s valued panda preserves, but it isn’t an automatic ticket out of poverty for the human habitants, a unique long-term study shows.

The policy hitch: Often those who benefit most from nature-based tourism endeavors are people who already have resources. The truly impoverished have a harder time breaking into the tourism business.

Wei Liu’s study, published in the April 25 edition of PLoS One, looks at nearly a decade of burgeoning tourism in the Wolong Nature Reserve in southwestern China. China, like many areas in the world, is banking on tourism over farming to preserve fragile animal habitat while allowing people to thrive.

But until now, no one has taken a close look at the long-term implications for people economically.

Liu is a PhD student in the Center for Systems Integration and Sustainability at Michigan State University. He and his colleagues took advantage of the center’s 15-year history of work in Wolong – which they call the “excellent laboratory” -- to study the complex interactions of humans and nature. 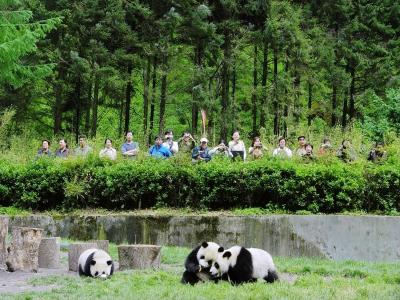 works together,” Liu said. “This is the first time we’ve been able to put it together to understand how changes are being made.”

“Drivers and Socioeconomic Impacts of Tourism Participation in Protected Areas” is co-authored by Christine Vogt, professor of community, agriculture, recreation and resource studies; research associate Junyan Luo; Guangming He, research assistant; Kenneth Frank, professor of measurement and quantitative methods and fisheries and wildlife; and Jianguo “Jack” Liu, Rachel Carson Chair in Sustainability. All but Vogt are members of in CSIS, of which Jack Liu is director.

Wei Liu and his colleagues followed 220 families in Wolong from 1999 to 2007 as they rode the wave of change in an area shifting from farming to bringing in tourists who both want to see are land of the giant pandas as well as ecological beauty. That wave was abruptly stopped in 2008 with the massive earthquake whose damage to roads and buildings still impedes business development.

China, Wei Liu said, has a political structure that heavily favors social connections. The group studied the impact of having resources in Wolong. Already having money, being educated, having relationships with governmental officials greatly increased a person’s chances of being successful in nature-based tourism.

Lacking these resources made it harder, which is significant since many of China’s programs and initiatives aim to lift people out of poverty.

“The policies haven’t yet reached their full potential,” Wei Liu said. “But now we have the data to show what’s happening.

An interesting piece of the research was learning that people who are engaged in tourism trade more likely to acknowledge the tradeoffs between tourism development and conservation. Wei said they acknowledged that tourism did increase noise, traffic congestion and disturbance to wildlife.

“People in tourism have a lot of knowledge of where tourists go in the wild and what they bring,” Wei Liu said.

Wei Liu said this research can help China – and others around the world – with the next steps of policy to balance tourism with habitat management. The area is working hard to rebuild from the earthquake, just as other developing tourism areas are challenged by natural disasters. The study, he and his colleagues say, can point to opportunities to improve policies.

The research was funded by the National Science Foundation and NASA. Jack Liu's research also is supported by MSU AgBioResearch.

ΓÇ£Drivers and Socioeconomic Impacts of Tourism Participation in Protected AreasΓÇ¥