As Michigan recognizes cycling and the importance of trails for our communities what can we learn from our international neighbors on both sides going forward.

While living in South Korea twice for a couple years each time between 2002 and 2012, I realized the South Koreans have more than excelled at introducing new advanced technology that would set trends and raise the bar for their citizens and global consumers. For example, in 2002, cell phones designed and produced in South Korea were state-of-the-art with built-in cameras, mp3 players, and flip-phone capabilities long before the market opened in the United States. That same year, major tech phone manufacturers like LG and Samsung allowed cell phone users to pay for meals with their phones with a quick swipe to a receiving device as they exited the restaurant– a foreign concept for cell phone users in the U.S. until introduced earlier this year.

As a number of international cities begin to recognize the importance of bicycles and continue design cities more in line with this growing preferred mode of transportation eco-minded urban planners in South Korea have constructed a bike path covered with solar panels. However, it is not just a bike path, but a 20-mile lane dividing a six-lane highway which generates enough electricity to power street lamps and electric car charging stations, as well as shade cyclists as they ride. An overview of the path can be viewed on YouTube. The innovative bike lane is one example of several clean power initiatives being taken by the East-Asian nation along with installation of solar panels atop parking garages.

Not only is South Korea taken bike lanes to a new level, but so have the Dutch. In Late 2014, the Netherlands introduced the world’s first bike path covered in solar panels. While the Dutch path is just a couple hundred feet test track, it is said to generate more than 3,000 kilowatt-hours. That quantity is enough energy to power a home for one year. 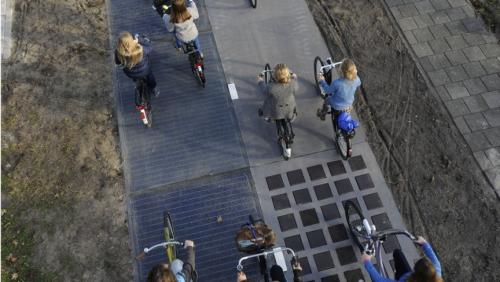 Outdoor recreation is important to Michigan’s communities, economy and future