In 2017, the Michigan State University Upper Peninsula Research and Extension Center in Chatham, Michigan, along with MSU Extension were awarded a grant through the Organic Farming Research Foundation with the primary goal of developing a framework of research and knowledge of organic grain systems in the region, and to determine the market potential for farm adoption.

Two research projects were launched: Examine oat production with various underseedings for weed control and forage establishment at the Guindon Farms in Cornell, Michigan, in field-scale plots, and examine grain variety and management trials at the MSU Upper Peninsula Research and Extension Center North Farm in small-scale plots. Both research trials were managed organically and were planted on certified organic land. 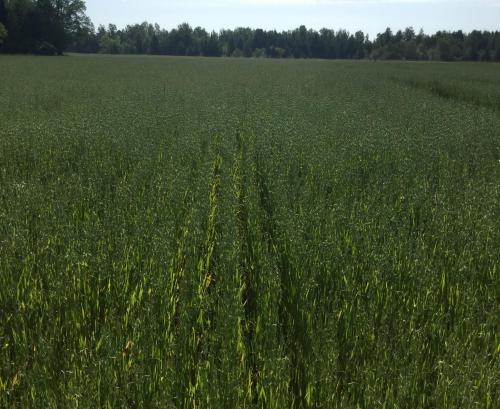 To improve weed management in organic production, we investigated using related species of fescue to suppress annual weeds. The underseeding then provides a forage for the following season. The replicated plots were planted using the cooperators equipment, maintaining production scale. A hulless oat variety, Streaker, was chosen to investigate the feasibility of growing hulless oats in northern climates. In the same field, a traditional variety, Deon, was also grown with a mixed legume/grass underseeding. Treatments consisted of Streaker planted with an underseeding of timothy, alfalfa and a fescue (Swaj, Minto or Perun). 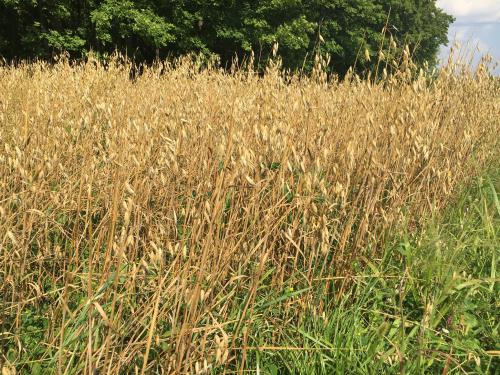 The rates planted and varieties used are outlined in Table 1. Hulless oats yielded poorly regardless of the fescue variety used, averaging 16 bushels per acre compared to the average Deon yield of 50.3 bushels per acre. Although weed management was achieved, none of the fescue varieties performed better. It was observed that greater population of alfalfa resulted in a decrease in weed population. With respect to stalk strength and kernel retention, the Streaker variety performed poorly in the 2017 growing season. Vegetation yields of the legume/grass underseedings will be taken in spring of 2018.

The team looks forward to additional work in 2018 so that recommendations can be developed to assist in the expansion of organic grain production in the Upper Peninsula to support the local organic meat industry.

If you are interested in organic research in the Upper Peninsula, contact Ashley McFarland at 906-439-5176 or ashleymc@anr.msu.edu. McFarland is the coordinator of the MSU Upper Peninsula Research and Extension Center in Chatham, Michigan.

Transitioning from Conventional to Organic Production