Around the nation, communities are turning streets over to pedestrians, cyclists and other non-motorized users for the purposes of building social capital, promoting physical activity and accessing local businesses in new ways.

The streets of America’s cities and towns were generally dominated by pedestrians up until 1910 or so. Merchants, children, bicycles, horses, streetcars and even livestock dominated the street space in the early 20th Century and there was significant contempt for the first automobiles intruding in the public street space during the dawn of the motor age.

Today, while the physical construction of streets and the social norms of society put the car first on most urban thoroughfares, a growing number of communities are organizing and promoting initiatives that exclude the car from streets and open the streets to pedestrians, bicycles and other non-motorized users. Known as open streets, these initiatives consist of closing a set of streets to cars for a specified period of time so that pedestrians, bicyclists, children, merchants, musicians and more can enjoy the public space for recreation, games, dancing, leisure, socializing and commerce. To date, there are more than 100 communities in the US and Canada that hold open streets initiatives (also called ciclovías in Latin America) either once annually or on a regular schedule throughout the year. 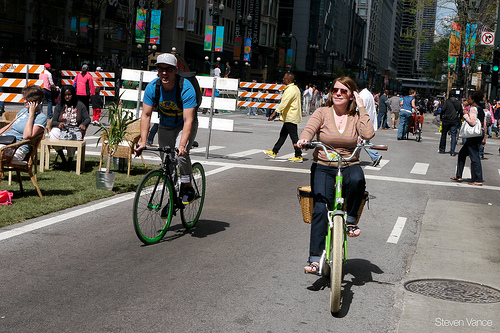 Environmental – Open streets are intended to get people out of their cars and on to the street using active transportation (i.e. walking, running, biking, inline skating etc.) and may reduce vehicle miles traveled and CO2 emissions during the event. However, the environmental benefits of open streets in the minds of event organizers are anticipated to be more long-term by drawing attention to bicycle infrastructure, for instance, and creating an opportunity for residents to get to know their streets in a safe environment. Open streets might then open the eyes of residents to cycling, transit and walking as alternative transportation methods to use to a greater extent thereafter.

Economic – Open streets organizers also cite economic benefits for businesses along the open street or participating in the initiative even though they might be outside the designated street (e.g. a food retailer). In St. Louis’ Open Streets 2011, 73 percent of participants spent money at a restaurant or store along the route and 68 percent stated they became aware of a store or restaurant that they did not know about before. It seems open streets provide a unique opportunity for businesses to market to passersby, building awareness with consumers, if not building that week’s bottom line.

Add a frontage quality analysis to your next walking audit

Great Lakes paddling safety: 10 tips to keep you safe on the Great Lakes