I was so impressed with the spider mite injury on the burning bush sample we got in that I almost overlooked its severe infestation of oystershell scale. The scales were so bad on some twigs that the scale took to colonizing the midveins of some of the leaves (see photos). The Oystershell scale, Lepidosaphes ulmi (Homoptera: Diaspididae) is oyster-shaped, gray, and 0.125 of an inch long. They commonly occur on twigs and limbs of apple, lilac, maple, willow, beech, ash and some other 140 or so hosts. Heavily infested parts are killed. The winter is passed in the egg stage under the female scale. Between 40-150 small, grayish white eggs will be found under each female scale in the spring. Crawlers are active in late spring, usually two to three weeks after apple bloom. The crawlers move about for a few hours before settling on the bark and inserting their long, hair-like mouthparts to begin feeding. The formation of their waxy scale coating begins soon afterwards. There appears to be a single generation per year in Michigan.

Like other “armored” scales that overwinter in the egg stage, dormant oils applied in the spring or fall are not effective in controlling oystershell scale. “Soft” scales overwinter as exposed nymphs which are susceptible to dormant oils. Control of armored scales requires insecticides be applied at the time the crawlers are active, which for oystershell scale is in mid- June. The presence of crawlers can sometimes be determined by sharply tapping an infested twig or branch over white paper. Crawlers are often orange, brown or purple and appear as moving specks of dust. Because of their waxy protective covering, other stages of scales are not readily controlled by contact insecticides. Insecticide sprays will not reach crawlers that have settled under old scales. Besides overwintering habits, another difference between armored scales and soft scales is that the soft body of the armored scale insect can be easily separated from its scale covering (see photo). In soft scales, the body of the insect and its scale covering are firmly joined and cannot be separated.

In general, controls will be more effective if heavily infested twigs or branches are pruned out. In some cases, large sized scales can be scrubbed off with a stiff brush. Horticultural oils offer a safe alternative to traditional contact insecticides and are especially good choices for sensitive areas, such as where people will be present soon after treatment. Because of their short residual, they help to conserve beneficial species. They are very effective against both active and settled crawlers. 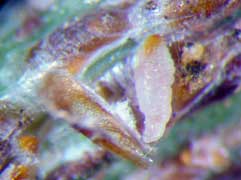 A close up of an oystershell scale
insect that has been separated from
the scale covering. 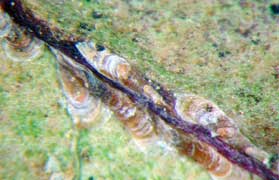 Oystershell scales along the mid-vein of
a burning bush leaf.