Now is the ideal time to scout for Palmer amaranth, a glyphosate-resistant pigweed that’s recently been identified in more Michigan counties.

Over the past few weeks I have received calls reporting that Palmer amaranth has been identified in more areas of Michigan. Counties where Palmer amaranth has now been confirmed include St. Joseph, Kalamazoo, Shiawassee, Clinton and Barry counties. The first report of this weed was in a southwest Michigan soybean field in St. Joseph County in 2010. In 2010 and 2011, this weed seemed to remain in a localized area in fields in St. Joseph and southern Kalamazoo Counties. However, in 2011 a small patch of Palmer amaranth was also found on a field’s edge in Shiawassee County. Through greenhouse testing we were able to confirm that the Palmer amaranth populations found in southwest Michigan and Shiawassee County had high levels of resistance to both glyphosate (Roundup) and ALS-inhibiting herbicides.

While we have not yet been able to confirm resistance to these herbicides in the recently reported populations in Clinton and Barry counties, the fact that Palmer amaranth in these fields were not controlled by glyphosate suggest that these populations are also glyphosate-resistant and are also probably ALS-resistant.

How is glyphosate-resistant Palmer amaranth getting into Michigan?

Since Palmer amaranth is not native to Michigan, we have speculated that the glyphosate-resistant Palmer amaranth populations found in Michigan have been established by seed brought in from an outside source. What is this source? While we may never know the direct source, when examining the field histories of the first reports of Palmer amaranth in some of these areas, one thing that stands out is that in many cases manure had been applied to these fields within a year or two of the growers noticing the plants. This along with some other observations have led me to speculate that the Palmer amaranth seed may have been brought in with cotton seed that is often fed to dairy cattle. This may not be a surprise when you consider the millions of acres that are infested with glyphosate-resistant Palmer amaranth in the southern United States, where a majority of the cotton is produced.

While this may help establish the origins of some of these initial reports in new areas of the state, once Palmer amaranth establishes itself, it is extremely difficult to control and seed can be moved from field to field with equipment and by other means.

Time to scout for Palmer amaranth

Right now is the ideal time to scout for Palmer amaranth. In areas where Palmer amaranth has not been confirmed, scouting efforts should be targeted in Roundup Ready fields that have been spread with manure in the past year or two. In many cases, if Palmer amaranth is identified early in its first year of establishment, there may only be a few plants scattered throughout the field (Photo 1). 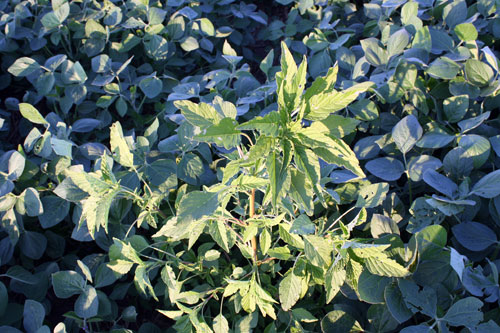 Photo 1. Palmer amaranth in a field.

While it is too late for any chemical methods of control, it is important to remove Palmer amaranth before seeds are produced. If female plants have started to produce seed, these plants should be removed from the field. Remember: one female Palmer amaranth plant can produce an average of 400,000 seeds.

While there are many keys to help in the identification of Palmer amaranth, the sharp bracts in the leaf axils (Photo 2) are one of the more distinguishing characteristics from the other pigweed species found in Michigan. 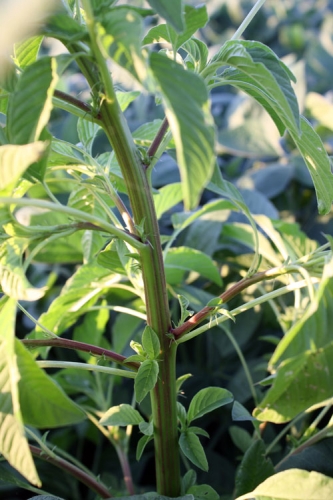 Photo 2. The sharp bracts in the leaf axils are a
distinguishing characteristic of Palmer amaranth.

Dr. Sprague’s work is funded in part by MSU’s AgBioResearch.