Phytophthora (Phytophthora capsici) can be a devastating disease of peppers. However, genetic tolerance has been incorporated in several commercial cultivars.

Phytophthora is a fungal disease capable of attacking pepper roots, shoots and fruit (Photo 1). Symptoms are often observed first where water gathers or flows. Disease then spreads from these areas as spores are carried on cultivation and other equipment or in water run-off. Phytophthora is long-lived in the soil, making it risky to plant a susceptible crop in fields having previous infections even after a significant length of time has passed. 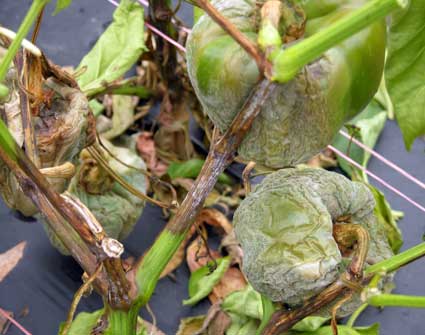 Pepper yield trials often include a combination of tolerant and non-tolerant lines. For growers who have Phytophthora, the performance of non-tolerant lines is irrelevant since the disease could potentially wipe out any increase in yield potential of susceptible varieties. For this reason, in 2012 a trial planted at the Southwest Michigan Research and Extension Center (SWMREC) in Benton Harbor, Mich., focused on testing only varieties that hold potential for growers with Phytophthora-infested fields.

Table 1. Yield in bushels/acre and size grades of 16 Phytophthora capsici-tolerant bell peppers grown at SWMREC in 2012. Plant population was approximately 10,560 plants per acre.

Photo 2 was taken from the first harvest and amount of fruit shown is indicative of early yield potential. 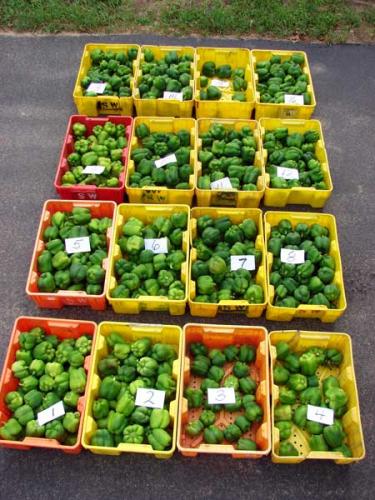 No selection was retested for Phytophthora-tolerance and no plant or fruit symptoms were observed in any trial plants or non-tolerant border plants. Since there are at least 14 Phytophthora races, it is possible to plant a “tolerant” cultivar only to have it show symptoms. This indicates the race in the soil is not one the cultivar can tolerate. Therefore, it would be of value for growers to identify what race they have and for seed companies to identify which race their pepper is tolerant to, something that is not currently done.

Alternatively, growers could fumigate or choose not to plant susceptible crops on that site again. Contact your local Michigan State University Extension county office for information on Phytophthora control in peppers and other vegetable crops.

Read a more in-depth report on this trial and other vegetable trials.