Pine needle scale, Chionaspis pinifolia (Hemiptera: Diaspididae), can be a serious pest of Christmas trees and ornamental pines that can cause branch die-back and tree mortality with heavy infestations. Pine needle scale is more likely to be a problem on imported species of two-needle pines such as Scots and Mugo, but large numbers have been occasionally reported on red pine, spruce and Fraser fir. Pine needle scale feeds by sucking plant juices from the needles, causing them to turn yellow and eventually brown. 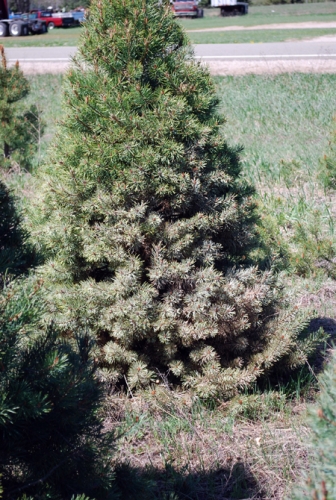 This Scotch pine shows a heavy infestation of pine
needle scale on the bottom portion of the tree.
Photo credit: Jill O’Donnell, MSUE

As pine needle scale numbers build, the needles become covered with the tiny, white scale insects. One lady who called the MSU Diagnostic Services lab described her infestation on her Mugo pines as looking like someone had painted her house and splattered white paint all over her Mugos. There are two generations of pine needle scale in Michigan. First generation eggs hatch and the tiny crawlers emerge when lilacs begin to bloom in the spring. The insect overwinters in the egg stage under dead female scales; therefore, dormant oils are not effective against pine needle scale and other armored scales that overwinter as eggs. 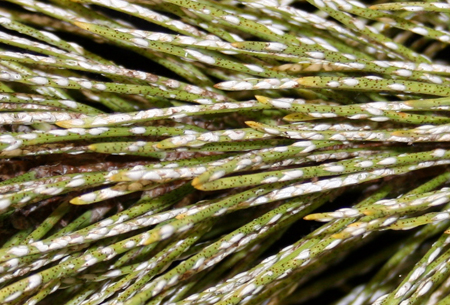 For those who track and utilize degree day accumulations for timing applications, the first generation of eggs usually hatch around 250-400 degree days base 50. It's not necessary to apply an insecticide immediately after you see the reddish-colored crawlers. In fact, it's best to let the crawlers settle down and establish feeding sites on the needles (the hyaline stage – 400-500 GDD base 50). At this point, the immature scales are exposed and have not yet secreted the white, waxy protective armor. If you can apply your spray at this point and if you get good coverage, you should get good control. The second generation crawlers appear in late July and offer another opportunity to control the scale.

Good scouting will help you assess the size of the pine needle scale population in your field, determine whether control is necessary and the best timing for control. On the other hand, be sure that applying a spray is necessary. Look closely at the white scales on the needles. Do you see lots of scales with a round hole or a hole with jagged edges? That is evidence that parasitoids (round holes) and predators (jagged holes) have attacked the scales. 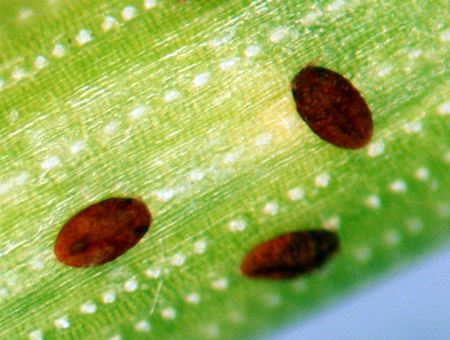 A close up of pine needle scale crawlers that sort of look like eggs
with eyes and antennae. Photo credit: Howard Russell, MSU Diagnostic Services.

You can also check to see if there are viable eggs below the hard white scale armor. Carefully flip off the white armor and see if you see the little reddish eggs. If you don’t find eggs under most scales, then you may not need to worry about spraying. Inspect susceptible species of pine at least twice a year for yellowing and large numbers of scales. If pine needle scale becomes numerous and the tree shows signs of stress, then control measures should be considered. 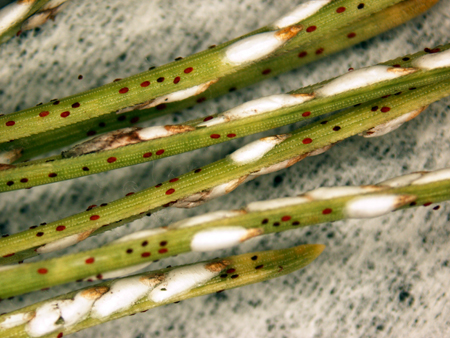 The brownish structures at the end of the adult pine needle scales
shown here are the cast skins from previous molts (called exuviae)
that remain attached to adult scale. This is a feature of all armored
scales and can be used to distinguish armored scales in the family
Diaspididae from soft scales in the family Coccidae.
Photo credit: Howard Russell, MSU Diagnostic Services.

The least disruptive method is to apply summer horticultural oil spray when the crawlers are active during the bloom period of common lilac. Summer oils should be applied at a concentration of 1.0 to 1.5 percent. With the early hatch and cool spring, watch the temperature after application. Don’t apply oils if there is a risk of freezing within a day or two of application. Read the label for specific recommendations.

A more aggressive strategy is to apply a spray containing an insecticide such as bifenthrin, carbaryl, chlorpyrifos, cyfluthrin, spirotetramat, etc. It is important to provide full coverage to interior portions of the tree, particularly lower branches. Two applications may be necessary to manage heavy populations as female scales have long egglaying period.

Be sure to read and follow all the instructions and safety precautions found on the pesticide label before using any pesticide.