Planting corn in twin rows on 30-inch centers is seen as an alternative to planting narrow-row corn (22- or 20-, or even 15-inch rows). In a twin-row configuration, two rows of corn are planted close together (usually 6 to 8 inches apart and alternating), and the twin rows are on 30-inch centers. See the diagram below, where each black dot represents a corn seed or plant planted in two twin rows. 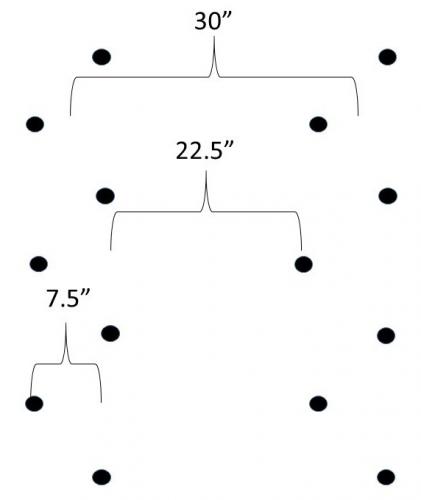 In this example, the seeds are planted on 30-inch centers, spaced 7.5 inches apart, making the inside rows spaced 22.5 inches apart.

The cost advantage to twin-row cropping, compared to narrow-row cropping, is that the planter is the only piece of equipment that needs to be purchased. The same sprayer and corn head can be used that were used for 30-inch rows. Twin rows, like narrow rows, have also been touted as providing improved weed control (quicker soil shading) and increased grain yield.

Several universities have conducted studies on twin rows. I will briefly cover the conclusions of these studies. I encourage you to read these studies for more information, especially if you are considering switching to twin rows.

The first study was published by the University of Nebraska in 2013, “Row Spacing and Seeding Rate Recommendations for Corn in Nebraska.” They found that twin rows did result in increased solar radiation interception at the V9 growth stage, but no increase at earlier or later stages.

In a study from Iowa State University, “Comparison of Twin Row and 30-in. Row Corn,” researchers compared twin and 30-inch corn at three populations (32K, 38K and 44K seeds per acre).

Finally, in a study from Indiana, “Responses of Maize Hybrids to Twin-Row Spatial Arrangement at Multiple Plant Densities,” researchers looked at three hybrids over three years in varying populations, and twin rows versus 30 inch rows.

In short, none of these researchers found a yield advantage in planting twin rows as compared to 30-inch rows.

Will leaving corn in the field to dry until late spring be a viable option?