Tips for identifying and avoiding this noxious native plant.

When speaking of native plants, people love to extol their virtues. But there is one native plant that is on every gardener’s “guano” list. Poison ivy can be a worry for many gardeners because it can grow in a variety of locations. It thrives in full sun as well as shade. The type of soil or soil pH can be very different and poison ivy thrives. But given its choice, poison ivy grows best as a wood’s edge type of plant. Poison ivy may top the short list of “bad” native plants for anyone that has had an itchy ivy rash that seemed to never get better.

Poison ivy (Toxodendron radicans) is a plant most gardeners dread finding. It often grows up among the perennials and as you pull weeds or spread mulch, you accidentally brush against it. You will regret you ever touched it. As much as 90 percent of the population is allergic to poison ivy. It often causes dermatitis or a skin rash.

Michigan State University Extension educators and Master Gardener volunteers receive a number of calls on hotlines each year dealing with poison ivy. It can be found in every county in Michigan. It also has its negative status established by being on Michigan’s Noxious Weeds list. Below are some of the common questions.

Can poison ivy have more than three leaves?

Poison ivy plants have compound leaves in groups of three. The center leaf in the three-leaf grouping has a petiole, or leaf stem, that is a bit longer that the other two. Leaf color can vary from dark, shiny green to a dull, yellow green. Leaf margins, or edges, can also vary from smooth to lobed to jagged. Another native plant with a much better reputation, Virginia creeper, has compound leaves in groups of five. But when the plant is young, it can produce scattered leaf clusters in threes and fours. It’s important to look at several leaf clusters on a suspect plant before realizing that you are consorting with the enemy. 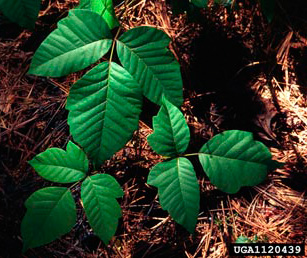 Can poison ivy grow into a shrub or a tree?

Poison ivy in Michigan is seen in two forms. It can run along the ground like a ground cover. It’s basically a horizontal vine. It can also climb. Its stem or trunk is not strong enough to enable it to be free-standing. As it clings to trees, it produces groups of aerial rootlets that allow it to climb a tree. The rootlets look like short groups of dark brown fringe scattered along the vine. Small boxelder trees have very similar compound leaves and are often mistaken for poison ivy trees. But they have no aerial rootlets on the side of the trunk. 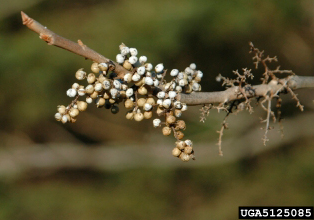 How did I get poison ivy if I never touched it?

Poison ivy produces sticky, resinous oil called urushiol on all parts of the plant. You don’t have to touch the plant; you just have to come into contact with the oil. It could be from touching a pet that has run through poison ivy. Or tools or equipment that came in contact with some part of the plant and have oil on them and are then handled. It could be from firewood that has a poison ivy vine attached to the bark.

As you read these words, birds are feeding happily on the small white poison ivy berries and will be soon returning them to a garden under a tree where you live.