Late blight has not been found in Michigan to date (July 20, 2012). There was a suspected find in the urban Detroit area; however, that proved to be Botrytis blight of tomatoes. The tubers that appeared infected had pink rot caused by Phytophthora erythroseptica.

Currently, due to dry weather conditions, the disease severity values (DSVs) are less than those accumulated at similar dates in the past. However, over the past few days, DSVs have increased, indicating that late blight risk has increased.

The disease-forecasting model that generates accurate predictions of late blight risk up to five days in the future now has a page to compare all stations at once. The new model is now available on the late blight website by clicking on the “5-Day Forecast” link in the left-hand menu on the home page (see picture below). Predicted risk for the next five days is high for most of Michigan. 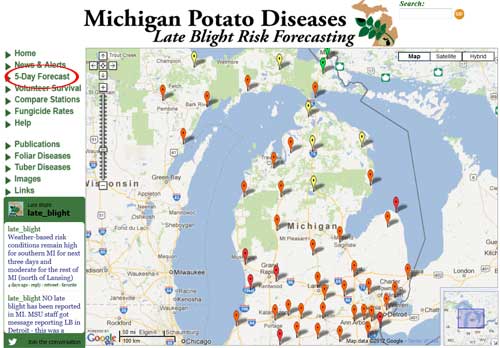 In addition, the Twitter updates can be seen on the pages as they are posted. The Twitter addition to the late blight disease-forecasting site in 2010 and 2011 proved popular. Growers and other stakeholders have the ability to keep track of important news on late blight in Michigan using Twitter. To follow the late blight site on Twitter, click on the “Follow us on Twitter” button on the home page (see picture below). 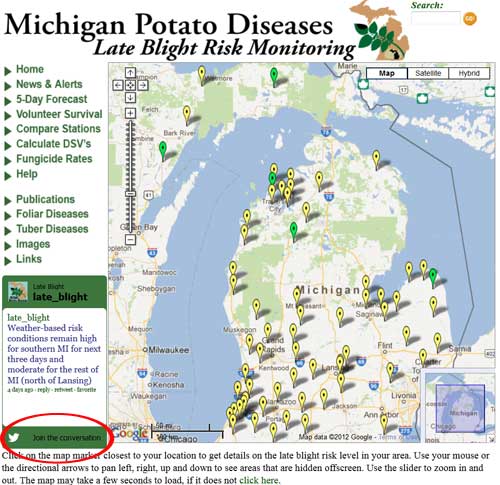