USDA statistics show the prices of major fertilizers have held steady in the last two months.

The September 27, 2012, approximate retail prices for bulk purchase of major fertilizers per ton, according to a collaboration by the USDA with the Illinois Department of Agriculture, were $632 for Diammonium phosphate (DAP), $629 for Monoammonium phosphate (MAP), $605 for Potash, $376 for liquid nitrogen and $833 for Anhydrous ammonia. The long-term price trends from November 2010 to September 2012 are shown in the table below. 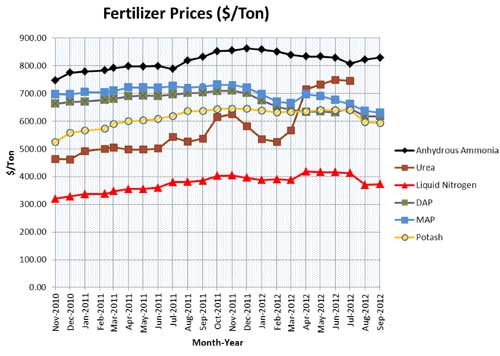 With the exception of urea, other fertilizers have remained fairly stable over time. Some seasonal variations were evident, such as some price reductions in the off-season. The price of urea showed the highest fluctuations with prices jumping by $147 per ton between March and April 2012. Urea prices for August and September 2012 were not reported due to dry weather curtailing spot sales.

Recommendations for planting soybeans after soybeans