The 2015 growing season has been rainy with generally moderate temperatures, conditions that are particularly conducive to fungal and bacterial diseases. In many strawberry fields, leaf spots are common though may not necessarily be severe. A few leaf spots won’t do much harm, but lots of them will reduce photosynthesis of strawberry leaves and therefore the plant’s ability to feed itself and may cause strawberry leaves to die prematurely. A loss of leaf area can weaken strawberry plants, reduce growth and make them more prone to winter injury. Furthermore, the various leaf spot pathogens can overwinter in the field and increase disease pressure next year. Most of these pathogens also infect runners, petioles, berries and berry caps.

In general, cultivar susceptibility and weather conditions determine which diseases occur in a planting in any particular year, since most foliar pathogens are already present on the farm or are introduced with the planting material. Even if they start out at very low levels, they can build up over time. Some cultivars that tend to be more susceptible to foliar diseases are Redchief, Raritan, Annapolis, Eros, Idea, Kent, Glooscap, Midway, Mira, San Andreas and Selkirk. All leaf spots are favored by extended leaf wetness and moderate temperatures of 65-75 degrees Fahrenheit, with angular leaf spot being especially promoted by nighttime frosts. In addition to leaf spot diseases, powdery mildew can occur on susceptible cultivars, but this disease tends to flourish under warm, dry conditions.

There are three main fungal pathogens and one bacterial pathogen that cause leaf spots in Michigan strawberries. They can be distinguished by the appearance of the symptoms. Common leaf spot, caused by the fungus Mycosphaerella fragariae, is characterized by round, light gray lesions with purple rims. Leaf scorch, caused by the fungus Diplocarpon earliana, is characterized by solid purple to brown spots on the upper leaf surface. Leaf areas between spots may turn yellow to bright red. Severely infected leaves turn brown, curl up and appear scorched. 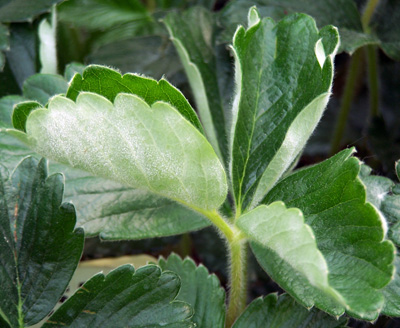 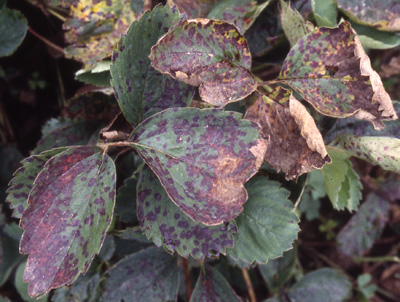 Phomopsis leaf blight, caused by the fungus Phomopsis obscurans, has purplish-brown, lens-shaped lesions with a light brown center. Lesions are often found along leaf veins or as V-shaped necrotic areas along the leaf’s edge. Older leaves become blighted and die prematurely. Angular leaf spot, caused by the bacterium Xanthomonas fragariae, has spots that appear angular and reddish-brown on the upper leaf surface and water-soaked on the lower leaf surface. Spots look like tiny translucent windows when the leaf is held against the light. 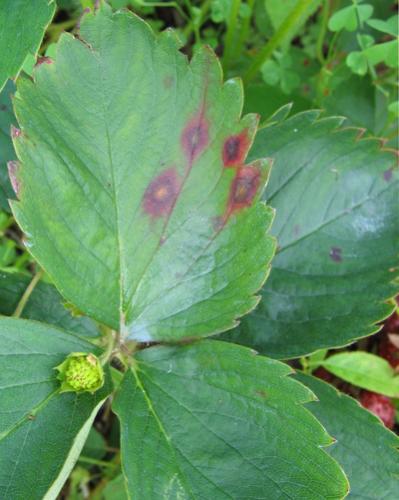 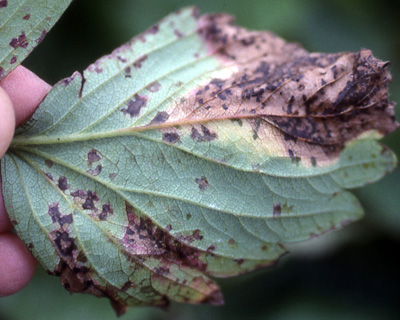 Nonchemical control options include selecting a well-aerated site, planting resistant or tolerant cultivars, using disease-free transplants, reducing humidity and leaf wetness by avoiding dense canopies and tight row-spacing, not over-fertilizing plants, applying overhead irrigation in the early morning to speed up drying of leaves and removing old leaf material and fruit mummies from the field at renovation. With respect to cultivar choices, it is hard to find a cultivar that is resistant to all foliar diseases, especially angular leaf spot. Or, they may be resistant to leaf spot and scorch, but not to Phomopsis leaf blight. However, the following strawberry cultivars are fairly resistant to fungal leaf spots: Allstar, Cavendish, Brunswick, Evangeline, Clancy, Guardian, Jewel, Lester, Mesabi, Ovation, Primetime, Seneca, St. Williams and Surecrop. For a list of cultivars and their disease susceptibilities, see page 213 of the “2015 Michigan Fruit Management Guide,” Michigan State University Extension Bulletin E0154.

As far as chemical control is concerned, while there are some differences in the timing and biology of the leaf spot fungi, they mostly respond similarly to broad-spectrum fungicides and can be managed collectively. The exception is angular leaf spot. Since this disease is caused by a bacterial pathogen, it does not respond to most fungicides except copper. Below is a table of efficacy ratings of fungicides for leaf spot control in strawberries. Since infections often occur on the leaf underside, good coverage of both leaf surfaces is needed, especially of young leaves, which are most susceptible.