Tomatoes are extremely sensitive to even small amounts of certain herbicides, so producers need to be cautious in how, when and where herbicides are used.

Miners used to take canaries into mines, especially when opening a new shaft. They did this because canaries are more sensitive to dangerous gases than humans. As long as the canary kept singing, they knew it was safe, but if the canary went silent, they knew they had better get out. In some respects, tomatoes are the canaries of the vegetable world. They are extremely sensitive to some commonly used herbicides, and applicators need to be cautious as to how they use products in the vicinity of tomatoes. Glyphosate and a combination of 2,4-D and dicamba are common herbicides used by commercial growers and homeowners. When tomatoes encounter these products, even in small amounts from drift, tomatoes will always come out on the short end. None of these products are labeled for use on tomatoes or anywhere near tomatoes – which the labels clearly indicate.

2,4-D plus dicamba is used to control broad leaf weeds in grass, the grass could be a lawn or commercial grains such as corn. 2,4-D has a strong smell and can be easily detected when used. It has growth regulator-type activity and affected plants will show curling and twisting before they die. Non-lethal doses to tomatoes will cause curling and darkening of the leaves (Photo 1), and potentially reduce yields depending on exposure level. Tomatoes are so sensitive that I have been in lawn and garden centers that had bags of a 2,4-D/lawn fertilizer combination and there was enough volatilization (I could smell it) from the product to curl the leaves of the tomatoes displayed on the other side of the room.

Glyphosate is used to control a wide range of weeds, and tolerance to glyphosate has been incorporated into some commercial crops, soybeans and corn being the best known and most widely grown. Glyphosate is also used to control weeds in non-crop areas and shielded applications in other crop species. However, the labels of glyphosate products clearly indicate not to use it on or near tomatoes.

The danger with glyphosate is that it is such an effective product that people like to use it everywhere. The other danger to tomatoes is drift from application to neighboring fields of glyphosate-tolerant corn and soybeans. Sometimes this damage is caused by the tomato grower who is raising the corn or soybeans as a rotation crop or trying to control problem weed populations by being able to use glyphosate. Most often the problem comes from a neighboring grower applying the product under conditions conducive to off-site drift. If this is the case, vegetable growers should be proactive and contact their neighbor to let them know how sensitive tomatoes are and caution them about being sure to apply it when weather conditions are optimum. 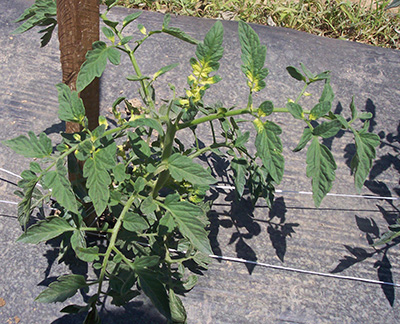 Greenhouse and hoop house tomato growers also like to use glyphosate to control weeds on the outside of their structures. Not a good idea! I hope you read that loud enough. Enough drift can come into the structure to affect the tomatoes.

If damage does occur, the next question is, “Will they grow out of it and will I get any yield?” That depends on how much of a dose they received. For glyphosate, the answer is generally no. So if it happens early enough, growers are better off to replace the plants instead of hoping things will improve. I have seen tomatoes grow out of 2,4-D damage if it is not too severe.

Tomatoes are sensitive to other herbicides as well, so Michigan State University Extension encourages growers to always read and follow label directions. Growers should also be aware of what is planted in adjacent fields and what kind of herbicide practices might be used for that crop. This is especially true as we approach the season for weed control in corn and soybeans, which may be planted in neighboring fields. Field crops tolerant of 2,4-D and dicamba have also been developed and will be planted in more acreage, so the threat to tomatoes will only increase over the next few years.