Many grape cultivars that normally survive Michigan winters with little to no damage may have sustained extended levels of damage. Once the damage is assessed, the challenge is to take the necessary steps for the 2014 growing season.

The 2013-2014 winter in the Midwest and Eastern United States was impacted by the polar vortex; extreme cold temperatures that normally float around the poles year-round, but “thanks” to climate change are unfortunately propagated farther, transporting warmer air to the North Pole and polar air into lower latitudes, directly in our vineyards. Temperatures plunged into the sub-zero digits and the extended duration of the cold events severely impacted the cold hardiness of the vines. Many cultivars that normally survive our winters with little to no damage may have sustained extended levels of damage. The extent of the damage will depend mainly on cultivar and location. This winter will show dramatic differences between cultivars and the spring will reveal what type of damage (bud, trunk, and vine death) growers will have in different vineyard locations. Once the damage is assessed, the challenge is to take the necessary steps for the 2014 growing season.

Reports of the extent of winter injury in vineyards across the Midwest and Eastern United States are rolling in. In Ohio, almost 98 percent bud damage is reported on vinifera grapes, with hybrids at 60 percent and American grapes at 30 percent. Even cold-hardy grapes are extensively damaged. In New York, the average vinifera bud damage, as surveyed by the Cornell Extension team, is 67 percent. However, the level of damage varies depending on vineyard location. For example, in Pinot noir, bud damage ranges from 18 to 100 percent, depending on vineyard site.

This year, the strategy for coping with the extensive winter injury should start with delaying pruning as long as possible during the dormant period. The delay should be used to assess the extent of winter injury and then adjusting the pruning strategies in relation to bud and vine damage and mortality levels. Therefore, before pruning grape growers should carefully evaluate each cultivar for bud damage.

Each bud or node is a compound bud or a complex of three primordia. The primary primordia, or “primary bud,” is the largest meristematic tissue in the middle of the compound bud. On each side of the primary bud, the secondary bud is located towards the base of the cane while the smallest, generally not-fruitful, tertiary bud is located towards the apical portion of the cane. For most of the varieties grown in the East and Midwest, the primary bud is carrying 70-75 percent of the cropping potential of the compound bud (primary + secondary + tertiary).

Knowing this simple bud morphology and making cross-sectional cuts with a sharp razor through the bud, growers will be able to identify the health status of each primordium in the complex compound bud. If the buds are alive and healthy, they should be green; brown or black is unfortunately an indication of mortality (Fig 1.). 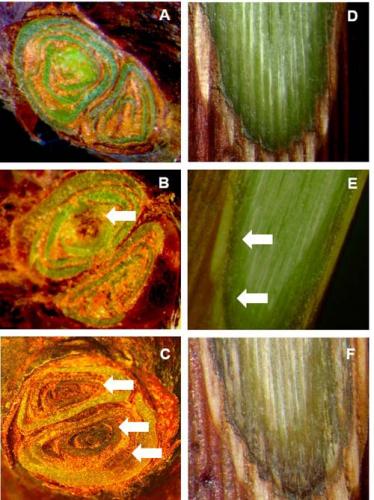 How many buds need to be sliced is related to the amount of damage that the vineyard suffered. If in your first sample of 40-50 buds they are all dead (brown-dark), the chances of finding living buds is very slim; therefore probably there is no need to continue the assessment. Contrarily, when the results are highly variable (alive and damaged in different samples coming from the same cultivar and the same vineyard location) to have a statistically better idea of the level of damage, the number of buds that Michigan State University Extension is suggesting to check is about 100. If the vineyards are not uniform (different vine size, slope, soil), it is better to keep samples from vines/areas separated to evaluate the potential impact of those variables. When the assessment of bud damage is complete, the next step is to adjust the pruning strategy for the 2014 season accordingly. General suggestions are reported in Table 1.

A classical recommendation in cool-cold climate viticulture is to prune cold-hardy cultivars first and the most cold tender varieties (Vinifera) last. Generally, secondary bud mortality is similar to that of the primary bud for each single variety. However, some indication of secondary buds percentage is important, especially when primary bud mortality is above 60 percent. When bud mortality is over 70 percent, pruning efforts should be directed to reestablish the fruit-bearing zone of the vines and balance the growth of the vines during the spring and the summer.

When vines are severely damaged, base buds close to pruning cuts have the potential to break bud and grow. This physiological phenomenon is very useful for increasing the number of shoots per vine during the spring and consequently increasing the total leaf area. Having a higher number of shoots in established vines with large root systems and plenty of reserves in the permanent structures of the vine will avoid excessive shoot growth (bull canes). Vigorous shoots tends to have long internodes and poor lignification, which makes them less resistant to winter injury and poor choices for next year’s pruning (both cane and spur pruning).

The extreme cold during this winter could also have permanently damaged cordons and trunks. Injured cambium tissues will be brown to black (Fig 1). When damage on permanent cordons is assessed, the pruning effort should be directed at reestablishing the structure of the vine. Renewal canes from the base of the trunks are the best option for replacing injured bearing structure. Severely injured trunks need to be replaced because in cool and cold climate locations, they are very sensitive to crown gall disease, especially vinifera cultivars, and because diseased portions of the vine need to be removed and replaced with new, healthy tissues.

Severely winter-damaged vines often have shoots called suckers coming from the base of the vine. Sometimes due to very extensive damage, the suckers could be the only resource for leaf area for the vines in the spring. Several extension bulletins and growers’ experience suggest that the suckers should not be removed or thinned to one or two per vine. Instead, the better option is to leave at least five or six suckers and to try to guide their growth towards the trellis system. Other suckers, if present, can be allowed to grow without training, leaving them on the ground, for multiple reasons: they are source of additional photosynthetic leaf area resulting in additional carbon production during the summer, and they will help prevent excessively vigorous growth on the potential replacement canes. Again, overly vigorous growth will compromise their potential of surviving the following winter.

The 2013-2014 winter was a forceful reminder that cultivar choice and site selection are still the most important tools we have against low winter temperatures, which are typical of our viticultural regions in the Midwest and Eastern United States. While we need to prune vines to mitigate damage as best as possible for the 2014 growing season, we should also keep in mind the 2015 season and crop, and the effect our choices during pruning and training will have on it.

Several viticultural strategies can mitigate the impact of winter cold:

Figure 2. Multiple trunks provide a protection to extreme cold temperature and for varieties particularly sensitive to cold. A = Vinifera and B = Hybrid. Not all the trunks of a multi-trunked vine would be killed during a harsh winter. Damaged trunks are removed and the trunks that survived are the bearing structure fir the following spring. For cold-hardy varieties or in viticultural regions or sites characterized by moderate winter minimum temperatures, two trunks are adequate. Photo credit: Pat Murad, MSU

Covering and uncovering vines every year is very labor intensive, but the most efficient technique to guarantee vines and fruiting canes survival for the following season.

Figure 3. Insulation of the graft union in Vinifera vines with soil or mulch by hilling up above the graft union. This method is going to provide the best protection from cold injury, especially to the graft union area and those viable scion buds above the union. Image from: MSU Extension Bulletin E2930

In 2012, the USDA released a new plant hardiness zone map because of the need to be in line with the temperature increase around United States. We are using the extra heat and the longer growing season to ripen cultivars that were impossible to grow only a few decades ago in cool and cold climate viticulture. Unfortunately, this warming trend is also producing extreme winter cold temperatures (polar vortex) and going back to the basic methods of grapevine protection during the winter is our best option to keep a sustainable grape industry in the Midwestern and Eastern United States.