Municipal water problems of today: Megacities with millions of thirsty residents and water guzzling infrastructures exhaust nearby sources and start pulling water from aquifers, reservoirs, and farmlands far away. Getting that water is so complicated that impacts are largely unknown.

In this week’s edition of Water International, scientists at Michigan State University (MSU) propose a novel way to begin understanding what happens to the globe when large cities – think Beijing, Los Angeles, Sao Paulo – reach far to get the water they need. The telecoupling framework allows scientists from many disciplines to show how environmental and socioeconomic actions lead to reactions and feedbacks – and then to more repercussions that reverberate globally.

“Our world is increasingly connected in such complex ways that the decisions we make must be well informed across long distances if we want to protect both the environment and the well being of people, ” said Jianguo “Jack” Liu, the Rachel Carson Chair in Sustainability and director of MSU’s Center for Systems Integration and Sustainability (CSIS). “We realize we need to transform our science.”

The math is daunting. Large cities currently take up 1 percent of the world’s land area, but draw water from 41 percent of the globe. That means transporting water long ways, and flooding the world with change.

The paper notes that water can be drawn in many ways. The researchers focus on Beijing to apply the novel approach of telecoupling to gain a full appreciation of moving tons of water real and virtual. Ultimately, the researchers wanted to understand if Beijing’s far-flung quest for water makes it more or less vulnerable to shortages.

“Most studies on urban water focus primarily on the city itself,” said Jill Deines, the paper’s lead author and a PhD student in MSU Distinguished Fellows Program. “The telecoupling approach allows us to consider positive and negative impacts on source regions alongside those to the city. We need this full picture of all the moving parts to fully assess the sustainability of modern cities’ water supplies.”

The MSU team applied the telecoupling framework to closely examine what happens to the many points of coupled human and natural systems to meet Beijing’s needs three ways:

Water transfers in many forms - a China case study 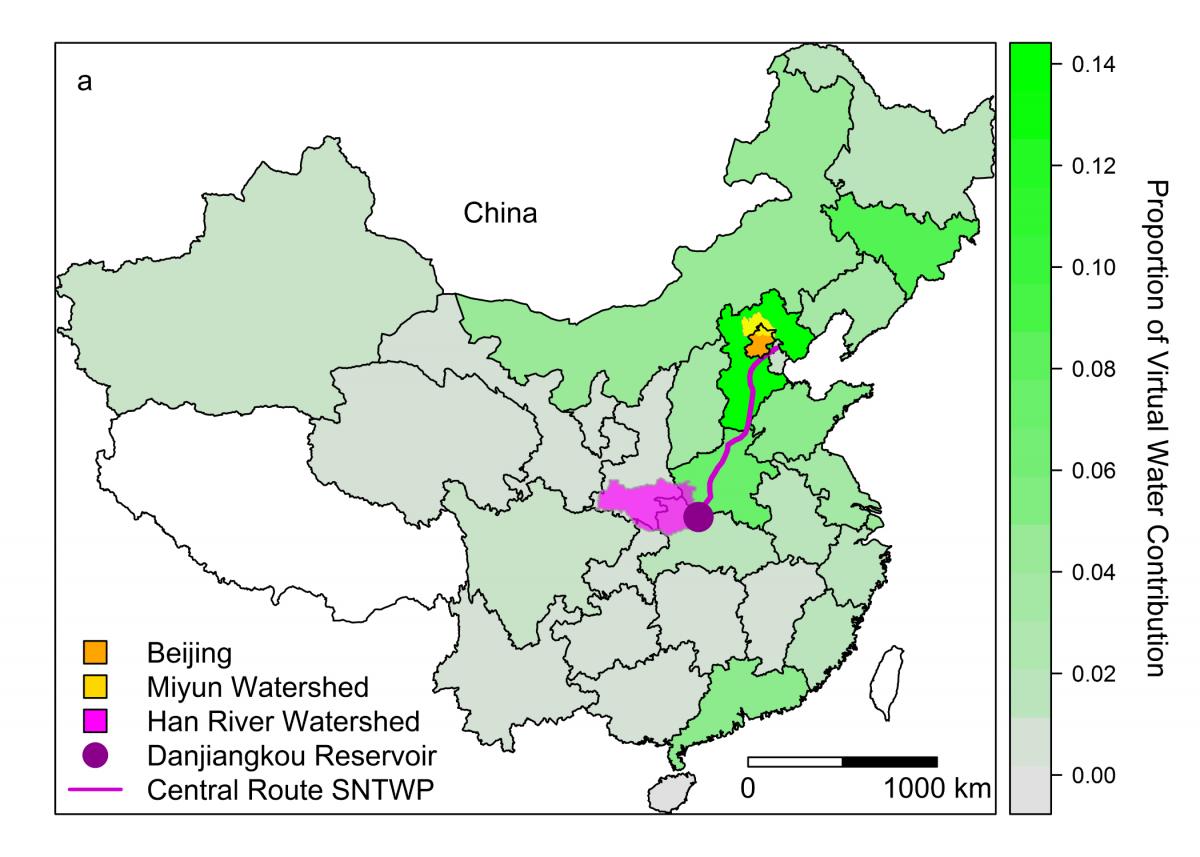 the world to date. The full project includes three diversion routes that bring 11.8 trillion gallons from the Yangtze River in southern China to water-stressed regions in the north at projected cost of 486 billion yuan or approximately $80 billion. The project is expected to increase Beijing’s water availability by 43 percent by 2020.

Virtual water. The water used to grow crops and produce industrial goods. Deines said that virtual water contributes more than half of Beijing’s water footprint – an impact that continues to increase.

Payment for ecosystem services: These are programs that compensate people to change their businesses or habits to improve water quantity or quality. An example is Beijing’s Paddy Land-to-Dry Land program with neighboring farming regions, which pays farmers for lost revenue if they convert their fields from water-intensive rice paddy to corn. The study indicated these services were cost effective, and improved the quality of available water, but didn’t add much to the quantity.

Beijing’s distant water sources provide much needed water volume for the city. Moreover, these telecoupled sources are less variable than Beijing’s local supply, decreasing vulnerability to water shortages, Deines said. On the flip side, these water connections have complicated impacts on far-flung regions. The telecoupling approach allows accounting across the whole system, often highlighting research gaps that have been previously overlooked.

In addition to Deines and Liu, “Telecoupling in urban water systems: an examination of Beijing’s imported water supply” also was written by Xiao Liu.