The earliest planted corn fields were looking extremely good across much of southwest Michigan going into the Fourth of July holiday weekend on the evening of June 30, 2014. However, heavy thunderstorm winds did an incredible amount of damage to the rapidly developing crop across widespread areas of Van Buren, Cass, St. Joseph and Kalamazoo counties, as well as undoubtedly many other locations across the region, in the overnight hours of June 30-July 1. The most severely impacted fields were the earliest planted and had the most advanced plant development. Many of these fields were in the 11-13 exposed leaf collar growth stages. The growth stage of the plants is important because of the relative closeness to the critical pollination period.

When corn plants are exposed to high winds, several things can happen. The most devastating is when the corn plant snaps off completely, which kills the plant outright. It appears that very little of this type of damage occurred in most fields. If the corn plant is laid down without breaking or severely injuring the stem, it is likely that "root lodging" has occurred. This may have been particularly important during this event because there were two lines of thunderstorms. The initial one dropped heavy rainfall on already wet soils and the second produced very high wind speeds.

The degree of damage depends on the extent of which the plants are laid out flat, the growth stage the plant has reached, and the extent of the damage that has occurred to the root system. Corn has an incredible propensity to return to an upward direction and complete its growth cycle. The stems often take on the typical "goose-necked" appearance and continue to grow and produce more or less normally. When pockets of corn are on an extreme list, even in a fairly advanced vegetative growth stage, this is likely to happen. The fields do not look as pretty as before, and some photosynthetic capacity will be lost during the process due to leaf orientation, but the plants can recover quite well, and often with minimum yield losses. 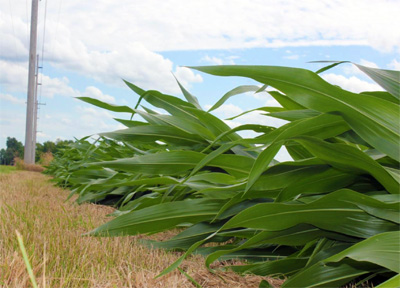 Harvesting these crops can also get to be a challenge, but we can work on that discussion later. Purdue University corn agronomist Robert Nielsen shows just how dynamic corn can be in recovery from root lodging in his 2011 article, “An Example Recovery from Severe Root Lodging.” When large areas or entire fields are almost completely lodged, and the plants are almost against the ground, the process can become more problematic, especially in the more advanced plants. There is less stem elongation that is yet to occur. On top of this, the plants have much more stalk weight to lift. Also, any stalks that were injured beyond repair become "dead weight" that the prone plants need to lift. The outcome in this situation is much more likely to be one of significant yield losses. It is very likely that pollination will be very poor on fields where the corn is extremely lodged and cannot turn upright before pollen shed. Nielsen discussed problems associated with root lodging following a 2002 high wind event in Indiana in his article “Root Lodging Concerns in Corn.”

What should growers do at this point?

Patience will most likely be the key. You should inform your crop insurance agent that you have had wind damage to your corn crop on your farm due to these storms. It will be hard for anyone to get a handle on how much yield loss or how severe the damage from the storms will be until we can see how the corn recovers. We should be able to see progress in about a week to 10 days, especially on the younger corn. More advanced fields closer to tasseling may be easier for insurance adjusters to evaluate.

Advanced seed corn fields near Schoolcraft and Vicksburg, Michigan also have suffered similar damage from the corn lying nearly flat in pockets of fields. This carries down into at least west central St. Joseph County in some locations. In general, the lodging is less severe in seed corn, mainly because the plants were smaller. 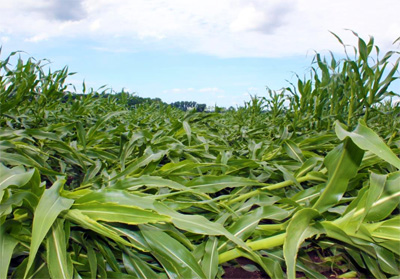 Lodging on seed corn fields creates another problem, which is how low the female plants have to be clipped during the de-tasseling operation. The more variable the plant height, the lower the plants are usually clipped to remove the tassels. Some of these female plants are likely to gooseneck, which will make it difficult to mechanically de-tassel, especially on the side it is leaning towards. The net effect of this storm damage is likely to be deeper clipping and pulling operations, which can lead to less leaves remaining on the female plants to produce the seed, and more hand labor to properly remove the tassels.

Soybeans are not likely to suffer much long-term injury from this storm. Increased areas of ponding on already saturated soils are the most likely causes of soybean yield losses. We would anticipate that advanced vine crops, especially watermelon, pumpkins and muskmelon, would have wind-whipping injury from the extreme winds. Later planted potatoes could also see some premature vine "lay-down" due to the winds. The vegetable crops may benefit from fungicide applications to help prevent point of injury disease infections.