Here’s a simple, cost-free and effective way to improve the performance of no-till soybean drills and air seeders by reconfiguring the planting units so none of the units will plant in old corn rows.

The increasing quantity and quality of corn stalks left in the field after harvest has reduced the performance of no-till soybean drills the following spring. One problem with drilling soybeans into untilled corn stalks is that some of the rows will be planted directly into the previous year’s corn rows. This occurs on 25 percent of the planting units when drills or air seeders having single disk openers are used to plant soybeans in 7.5-inch rows into corn stalks that were planted in 30-inch rows. The seed-to-soil contact and planting depth in these rows are much less uniform than they are in the other rows.

Some producers plant on an angle to the old corn rows to try to reduce this problem. This is not recommended and will actually reduce seed-to-soil contact and planting depth uniformity across the full width of the drill. A simple soybean management rule to remember is plant with the rows and harvest on an angle to the rows.

Tillage is one way to manage the corn stalks. However, there are effective alternatives to tillage. Paul Jasa, agricultural engineer at the University of Nebraska, recommends reconfiguring the planting units on no-till drills so that none of the units will plant in the old corn row. For example, to do this on a drill or air seeder, remove all the units that run over the corn rows on the front and rear rockshafts (six units on a 15-foot drill and eight units on a 20 -foot drill). Then, simply mount the units that came from the left half of the rear rockshaft to the right half of the front rockshaft and vice versa. There is an excellent diagram in the John Deere 750 operator’s manual showing which units to remove and where to re-attach them. Photos 1 and 2 show how the reconfigured planting units look from the front and the back of a John Deere 750 drill. 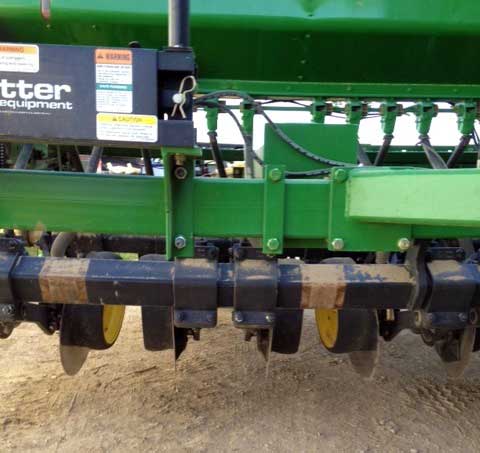 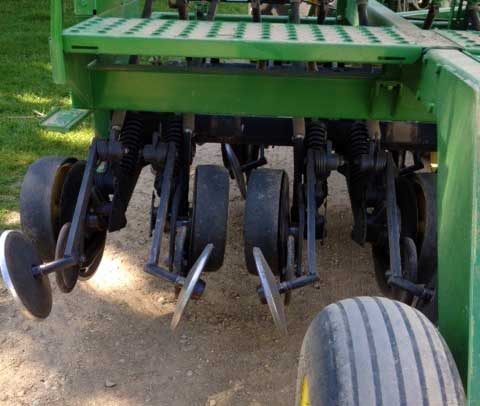 I shared Jasa’s recommendation with two dedicated no-till producers last winter. Last week (as of Dec. 10) they called and told me that they had reconfigured their John Deere 750 drill prior to planting 350 acres of no-till soybeans this spring. They were impressed by how well this simple conversion worked. Germination and emergence were greatly improved in the six rows that were moved off the old corn rows. It took them three hours to remove and re-attach the six planting units. The person that operated the drill said that the new configuration did not impede residue flow or increase plugging problems.

Before the conversion, they estimated that only 75 percent of the seed planted in the old corn rows germinated and emerged. After the conversion, nearly all the seed emerged. The time they spent reconfiguring, their drill prevented over $1,500 in wasted seed in 2012 alone.

I used the John Deere 750 drill as an example in this article because this was the drill that was reconfigured by the producers. This procedure will work with any drill or air seeder equipped with single disk openers having a gauge wheel mounted beside each opener. 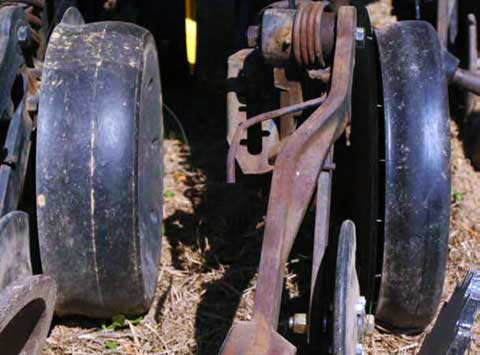 If you own a drill or air seeder equipped with single disk openers and want to plant 7.5-inch row soybeans into 30-inch corn rows, consider reconfiguring your planting units before spring of 2013. You won’t find a less expensive and more effective way to improve the performance of your drill or air seeder.

In the Weeds podcast on upgrading your cropping system