Sooner or later, sparse rainfall catches up with growers over the course of a season. Southwest Michigan has been on the edge of having poor soil moisture for much of the growing season. This week's bright sunshine, high winds and temperatures near 100 degrees Fahrenheit have pushed crops into significant moisture stress in many areas across the region. The more advanced fields of corn are starting to really show moisture and heat stress now. With spotty chances of rain in the forecast, stress, both in and out of the field, is likely to get worse over the next couple of weeks.

Most areas missed the rainfall that fell in northern and eastern portions of Michigan last weekend. The exception to this was near South Haven/Grand Junction/Fennville, Mich., which picked up 0.95 to 0.35 inches from an isolated thunderstorm last weekend. Most other areas picked up less than 0.15 inches. On average, rainfall totals are running around 1 inch behind for the last two weeks and about 1.5 inches behind for the last four weeks. Below normal precipitation is indicated in the 6 to 10 day outlook from NOAA, with the region in the much below normal precipitation zone for the 8 to 14 day outlook. We are not alone in this, as much of Indiana and Illinois are expected to remain dry as well during this period.

It looks as though we may be trading hot and dry conditions to cool or fair and dry conditions in the near future. NOAA's 6 to 10 day outlook shows a cool down following the passage of a cold front later today (June 21), with below normal temperatures expected, moderating to more normal temperatures for the 8 to 14 day period. Base 50 GDDs averaged 781 GDDs base 50 since May 1. We normally accumulate around 17.5 GDDs base 50 during the next five-day period.

Early planted commercial corn is at V8 to V9. Most later-planted corn is V5 to V7. Moisture stress remains the big story in the southwest. The relatively good news is that early season moisture stress is less damaging to yield potential than stress occurring closer to silking. However, there are some pretty important yield components that are being decided in vegetative growth stage corn. Purdue corn agronomist Dr. Robert Nielson reports in Ear Size Determination for Corn that kernel row determination is thought to be established between V5 and V8. This is more often a function of the hybrid raised, with some influence on growing conditions. Ear length, or the number of kernels per row, is strongly influenced by environmental stresses and is thought to be complete by V15, and perhaps as early as V12. This means that on the earlier planted corn, we are entering the growth stages that drought will likely start to seriously impact yield potential. The later planted corn will be approaching this period soon.

Other than a lack of moisture, the crop generally looks good across the region. We have been looking at fields that have various challenges, including some seedling and leaf diseases. Seed corn is growing rapidly. With little rainfall, it is important to keep up with irrigation to stay ahead of the depletion curve. Fields are being treated for first generation corn borers. With this strong push of air from the south, keep an eye out for development of leaf rust in more advanced fields.

Drought stress on vegetative growth stage soybeans is usually less critical to final yields compared to corn. Be sure to control weeds to keep moisture stress as low as possible given the situation. Soybeans often slow top growth, but keep developing roots under early season moisture stress. This will usually pay dividends later in the season, as the plants have more potential to benefit from a return of normal moisture levels.

Wheat is approaching harvest quickly. Dry conditions will most likely reduce test weights. Second crop soybeans following wheat should only be tried on ground that is irrigated given the poor soil moisture levels.

Most growers have harvested second cutting alfalfa. Potato leafhopper numbers have remained low to moderate. Keep an eye on alfalfa regrowth. Threshold is one potato leafhopper adult per sweep in the early re-growth stage. Hot, dry conditions are nearly perfect for the rapid increase of this pest in fields.

Be sure to get your acreage reporting in on time in early July to your crop insurance agent and with the USDA Farm Service Agency. Crossing the T's and dotting the I's may really be important this year.

Wheat is turning in all fields. Very little head scab symptoms have been observed. There are fields that are showing symptoms of Stagonosporum glume blotch (formally known as Septoria glume blotch), as well as fields showing what appears to be symptoms of take all disease. Stripe rust and what appears to be cereal rust is present in many fields. For more information on rust diseases, see MSU Extension’s fact sheet Identifying Rust Diseases of Wheat and Barley. 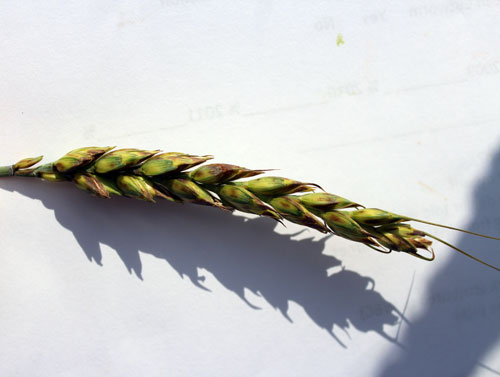 Corn ranges from V4 to V10 with much of the crop between V5 and V8. Rapid growth is now occurring in many fields which mean high nutrient uptake is occurring, as well as high water use. Monitor soil moisture carefully in irrigated fields over the next few weeks.

Reports of armyworms are still coming in, but they are very scattered in the west central region. The majority of the region has not seen widespread damage. Where we have seen larvae, they are mostly quite large, between 0.75 and 1 inch. Keep in mind that large armyworm larvae (1.5 inches long) are difficult to kill with insecticides and will likely pupate soon. Also, watch preharvest intervals if making an insecticide application to wheat.

Alfalfa ranges from early regrowth after first cutting to just finished second cutting. Potato leafhopper numbers are still fairly low, but well worth monitoring as these numbers will likely begin to build in the coming weeks.

Dry bean planting is approximately 70 percent complete in Montcalm and Mecosta counties. Planting will likely be completed in a few days.

Soybeans are variable in growth stage with very low numbers of aphids present.

The region received scattered showers over the past week. The amounts varied from a trace to up to 1 inch in some areas. The rains have been just enough to keep the crops going at this point in the growing season. Crops are growing rapidly with the extremely high temperatures early in the week. There was some rolling of corn leaves on coarse-textured soils and in areas of fields that have compaction problems. Soil moisture is considered adequate at this time, but timely rains will be needed as we move into the warmer part of the growing season.

The corn crop is growing rapidly with the warm weather and just adequate moisture. The crop ranges from V3 to V9.There are still a number of insect pests that are causing problems in some areas. Armyworms, cutworms and grubs have caused stand problems across the region. Continue to scout fields, especially on the borders, for these pests. Now is also a good time to walk your fields to assess your stands for plant spacing and skips. If your planter is the problem, now is the time to make notes and make the necessary adjustments this winter. High yields start with good stands.

The soybean crop could be called mixed with some excellent stands and some very poor. There have been a number of growers that have been replanting and filling in areas of fields. The early planted fields have the second and third trifoliate leaves emerged. Herbicide applications are being made. Many growers are struggling to find time in the day when the wind speeds are low enough to spray. There are no reported serious pest problems. With the dry conditions ahead, scout fields for spider mites and other insects.

The wheat crop is turning and harvest will be about two weeks ahead of normal. The region has had adequate moisture to finish the wheat crop except maybe on the very light soils. Most growers feel that we will have average yields. There is no evidence of head scab. If you are considering planting a cover crop after wheat, now is a good time to secure your seed from your local suppliers.

Second cutting alfalfa harvest is in full swing. Most are reporting very good yields and quality. There are still some reports of alfalfa weevil feeding. Potato leafhoppers are in most fields. Scout regrowth for potato leafhoppers. Spring seedings are being harvested.

Dry bean planting is wrapping up. The early planted beans had some emergence problems. The later planted fields have been emerging rapidly and look very good.