Regional Reports on Michigan Vegetables – May 18, 2011

Field work has slowed on many sites due to wet soils. Transplant timing has been difficult since growers have had to hold them longer than usual.

Asparagus harvest continues with approximately 25 percent complete. Purple spot symptoms continue to be observed, which is expected given our wet spring.

Peas continue to grow well with no blooms at this time.

Tomatoes planted under tunnels have reached the top of the plastic and the plastic is being slit to allow the plants room to grow.  The plants also have flower buds.

Sweet corn continues to be planted.

Cutworms are active, so growers need to be on the lookout for them in susceptible crops.

Field work was possible on well-drained fields through Thursday (May 12), but has been essentially halted since that time due to 3- to 4 inches of precipitation. Muck and mineral soils are experiencing flooding in areas where drainage ditches are unable to handle the excess water and some crop losses are possible.

Barley cover crops and onions are up and lettuce is holding on the muck. Mineral bare soils are cool, between 50 and 60°F. Even cool-season crops prefer soils above 60°F (the warmer the better) for seed germination.

Air temperatures dipped into the high 30s this week. Holding transplants has not been much of an issue with cool temperatures prevailing. An unusual flush of the pink-flowered, winter annual “dead nettle” may be seen among other flowering winter annuals such as chickweed and mustard. Hand-weeding for some established crops has been necessary.

A cool spring and responding to the media

Growers and MSU Extension educators near metropolitan areas can expect calls from the media when a bad story looks good. With the cool, wet weather we’ve been having, this may be one of those times. Having been out of town, I haven’t fielded any of these calls, but I would not be surprised to get one today. Here are some of my “talking points.”

Growers always hope for an early spring; one that enables planting of some crops in late April. Cool season crops such as cabbage, lettuce, onions and carrots do well planted or seeded early, even if cool temperatures and rainfall follow. There is risk involved with seeding warm season crops because cool and wet soils can threaten seed establishment and cause losses, but it is sometimes worth taking the chance.

In Michigan, many vegetable growers manage risk by using plastic mulch to warm the soil and row covers to create a warm environment for crops such as tomatoes and melon. If sweet corn is planted into warm soil – over 60°F – it, too, can survive some cool temperatures and wet weather. However, if April is cool and wet, growers will not be able to be in the fields, so they hope May will be better. Here, in Southeastern Michigan, April showers brought about 5 inches of rain with only seven days of temperatures above 60°F, which was not very hospitable for gardening or farming. Despite our best hopes, May has been cool and wet with 3 to 5 inches of rain to date. In addition, weather records indicate that this region is about 10 days behind average in terms of air temperatures that control soil temperatures as well. Vegetables thrive in warm soils.

There has been a scant week of weather suitable for field work in May so far and in that week much ground was worked, crops seeded and planted. However, it has involved some strategy; rearranging field plans, postponing tasks, substituting others and trying to keep cell phones dry.

Regardless, it isn’t an early spring but it may well be a good year.

The weather turned warmer and drier last week before again turning cool and wet by week's end. During this time, growers worked hard to advance the progress of field work. Windy conditions have limited spraying activity. Total seasonal heat accumulation remains well behind normal. Base 50 growing degree day accumulations from Fremont to Lawton average only about two-thirds of the 2006-2010 average and only 75 percent of the very cool, 2009 growing season. Depending on the crop and west Michigan location, grower reports regarding field work vary from being nearly caught up to two weeks behind normal.

The first sweet corn is popping out of the ground (Photo 1). It could be greener, but at least it’s up. CabbageSquash planting is underway. Mint is up and growing (Photo 2). Peas, leaks, radishes, red beets and lettuce appear to look good, with a rate of growth changing with temperature. transplanting continues. The only observed insect activity was the cabbage white butterflies laying eggs on the young transplants. 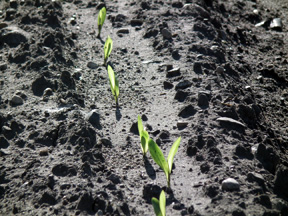 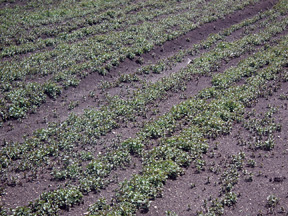 Celery, transplanting is about a third complete across the region. The first carrots have emerged (Photo 3). Planting progress remains well behind normal. Onion planting is complete at all west Michigan farms that I have visited. Emergence appears to be good in most locations. 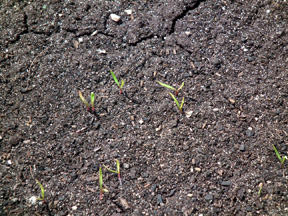 Wet weather continues in the central portion of the state, hindering and delaying field work in many areas. The Montcalm Experiment Farm received over 1 inch of rain Friday (May 13) evening with an additional 0.25 of an inch over the weekend. Standing water is common in low areas of fields

Potato planting is approximately 30 to 40 percent complete. Soil compaction issues are likely in many fields.

Dry bean and pickle planting is still a few weeks away. Wet soil conditions are having an impact on these crops as several growers are changing crop rotation plans in order to plant earlier crops on fields that are dry or better drained now.

Weather has generally been good for fieldwork over the last week. Rain amounts between 0.76 and 1 inch fell across the area over the weekend, reducing the risk of crop damage from blown sand and resulting in ideal conditions for plant germination. Easterly winds remained too high to allow spraying much of the time, but winds overnight on the mornings of May 16 and 17 kept temperatures high enough that we avoided frost in all but a few low areas.

Warm weather on Wednesday (May 11) and Thursday of last week got asparagus harvest off to an unexpectedly quick start. Rapid growth of spears along with a developing labor shortage resulted in some asparagus fields being mowed rather than picked. Cooler weather over the weekend slowed growth and allowed pickers to catch up, but cold northerly winds on Sunday did result in some bent spears that had to be diverted from fresh to processing.

On the pest front, common asparagus beetle adults are actively flying and laying eggs on spears, and a few fields have already been treated for this pest. White cutworms are an occasional problem. Demand remains high in both the processing and fresh areas. Some growers are still catching up on asparagus crown planting, but that chore is mostly complete.

Carrot planting is complete in our area. Growers are hurrying to get preemergent herbicide sprays on ahead of carrot emergence. The earliest planted fields do have carrots up, but still in the rabbit-ear (cotyledonal) stage. Small grain cover crops are now large enough to prevent serious wind damage to carrot fields.

Growers have begun working fields in preparation for planting winter squash and pumpkins, but to my knowledge none have gone in yet and probably will not until corn planting is finished. Farm marketers have begun transplanting vegetable sets, but are utilizing frost protection devices on those plants.

Master sanitation schedules: A tool to effective cleaning and sanitizing