Choosing corn hybrids is among the most important decisions a corn grower makes each year. Yield potential, disease resistance and herbicide/pest resistance are all important factors that need to be addressed and balanced. Another important factor is relative maturity. A full-season hybrid can take more advantage of available heat units, and yield more, everything else being equal.

Growers may choose hybrids of differing relative maturity for various reasons. Michigan State University Extension recommends choosing a hybrid that is likely to mature to black layer 10 days before the average first frost. You may also choose varying relative maturity to spread out flowering and pollination as a hedge against drought and to vary harvest dates. Usually, you do not choose all full-season hybrids because the summer may be particularly cool or a killing frost may arrive early. 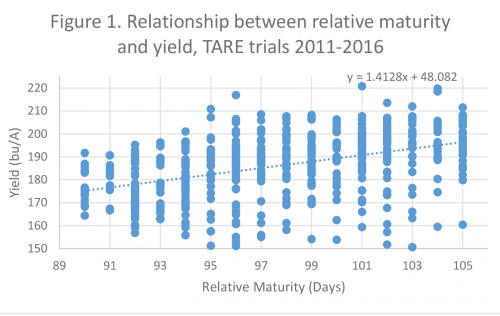 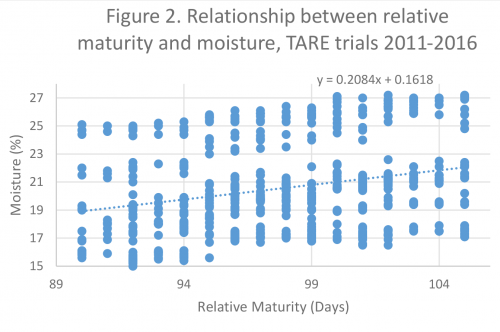 At current corn prices ($3.50 per bushel with a $.050 basis), the extra 1.4 bushels per acre could gain an additional $4.20 per acre. However, that grain would, on average, have a higher moisture content.

What is the discount for growing wetter corn? According to the sources cited below, you can estimate high-temperature drying energy costs per bushel per point of moisture removed by multiplying the propane price per gallon ($1.29) by 0.022. That calculates as 2.8 cents per bushel per point. That extra 1.4 bushel will cost an additional 0.8 of a cent, more than covered by the increased yield.

These data suggest growers should grow the longest day hybrid that they feel comfortable growing in their area, keeping in mind there are good reasons for spreading out relative maturity. Also, there can be hybrids with shorter relative maturity that yield significantly better than longer day corn. Again, yield potential, disease package and genetic modifications are all important factors in hybrid choice, along with relative maturity.

This report was made possible by the generous support of the cooperating seed companies, and the Corn Marketing Program of Michigan.

Corn silage refresher – Part 1: How to set your cutting date