With the high cost of fertilizer this season, many producers are making decisions about how much to purchase, how much to apply, and which fields to treat. As you make these decisions, consider that insects as well as plants are affected by fertilization.

In 2000, when soybean aphid (SBA) was first found in Michigan, growers and extension educators reported severely yellowed plants in some fields. These plants were described as “dripping” with aphids. The yellowing resembled potassium (K) deficiency, although the symptoms were top-down, not bottom-up. Plant tests confirmed that the plants were indeed K-deficient. Yellowed, heavily infested plants were reported in southwest Michigan in areas with sandy soil, on sandy knolls and in soybean fields planted after alfalfa.  All clues pointed to a link between K deficiency and aphids, but which came first? The deficiency or the dripping?

In 2004 and 2005, graduate student Abby Walter sampled plants from symptomatic (yellow) and nearby green areas in commercial fields in southwest Michigan.  She also conducted a series of experiments in a severely K-deficient field (soil test: 37 ppm) in southwest Michigan, measuring how fast aphids reproduced in meter-square field cages in replicated potash-fertilized and unfertilized plots.  She then used tiny clip cages to follow the reproduction of individual aphids on plants in the same K-fertilized and unfertilized plots. Finally, she sampled phloem sap from plants to determine the proportion of various important amino acids. Here is a summary of her findings:

Hypothesis #1:  Soybean aphid numbers are higher on K-deficient plant
Answer: Yes. In commercial fields, the average number of aphids per leaf was 50 percent greater on the plants with severe yellowing compared to plants growing in green areas of the same field. Plants from deficient and non-deficient areas had the same aphid number per plant. However, the K-deficient plants were stunted and had fewer leaves per plant, so that aphid density was higher. This is why aphids appeared to “drip off” of symptomatic plants. 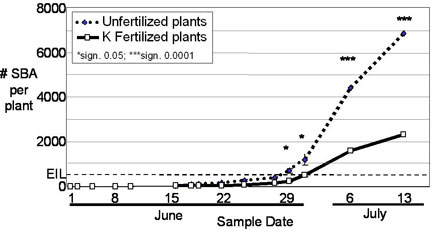 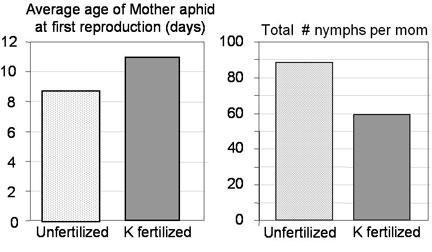 Answer:  Probably. Abby found that the proportion of the amino acid asparagine was greater in phloem sap from deficient plants. Aphids feed on phloem sap, a poor source of nutrition because it is low in nitrogen in the form of amino acids. Asparagine is a non-essential amino acid that is an important nitrogen source in the aphid diet; aphids can convert asparagine into essential amino acids lacking in their diet! How do aphids do this?  They have friendly symbiotic bacteria living in their guts that do the job for them. So, K-deficient plants do appear to be nutritionally better (i.e. aphid candy), which may partially explain the quicker and greater reproduction on such plants.

So what? First, this research demonstrates that crop fertility can effect the population of, and damage from, an insect pest. If you need a reason to spend time and money soil sampling and following recommendations for applying potash to build soil K levels, reducing the impact of soybean aphid is a good one. Second, even if you don’t plan to apply potash, this research still provides you with valuable information to select which fields to scout first and more often. Fields with a history of K deficiency, or a soil type susceptible to deficiency, or fields planted after alfalfa are all at greater risk for an aphid outbreak.

In 2007, a very low aphid year in Michigan, the only fields that went over threshold in August were K-deficient fields in southern Michigan. The link between potassium deficient and soybean aphid is real, and can lead to yield loss! 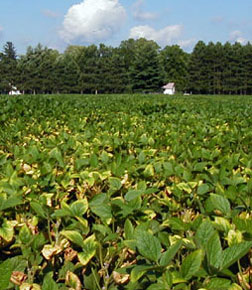 SBA and K in a southwest MI field.