These insects are small and difficulty to find now, but can easily be identified by the galls they form later in the summer. If an insecticide is needed, it should be applied in the spring when the overwintering immature females are still exposed.

Cooley and Eastern spruce gall adelgids are the sap-feeding insects that cause pinecone-shaped galls to form on the shoots of Colorado blue spruce (Cooley) and pineapple-shaped galls at the base of new growth on white and Norway spruce (Eastern).

These adelgids overwinter as immature females (stem mothers) in the bark crevices of twigs and around the base of the buds. At this time of the year, she will continue to feed and mature. Eventually, she will secrete white, wooly wax around her body and deposit eggs. At bud break, these eggs hatch into nymphs, which move to the new growth and begin feeding. This feeding causes abnormal twig growth which results in the characteristics galls. The adelgids remain safe in the gall until August and September when the gall turns brown and opens to release mature nymphs. 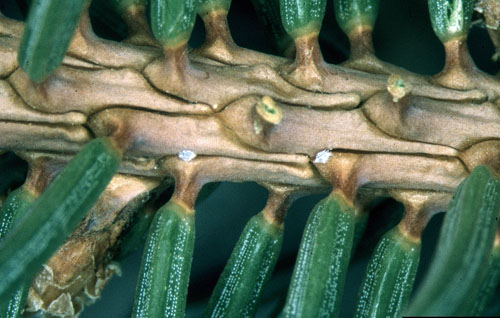 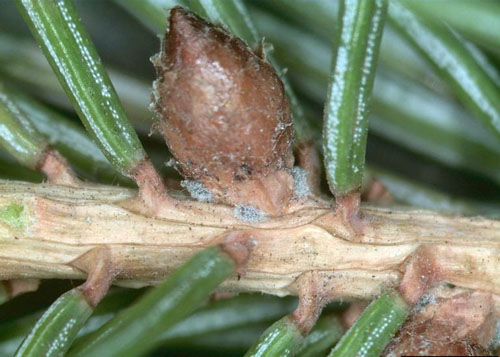 If you had a lot of galls on your spruce trees last year, the best time to apply an insecticide in the spring is before the overwintering female cover themselves with the white wooly material and eggs are laid. With both of these adelgids, the first adults become active at 25 to 120 GDD50. Scout your spruce fields looking for old galls, examining twigs and buds for the stem mothers.