Mossy stonecrop, commonly called Sedum, can be a difficult weed to remove from lawns.

Mossy stonecrop, sometimes commonly referred to by its scientific name Sedum acre, is a small, fleshy plant often planted in ornamental beds that escapes and invades lawns. Once in lawns, it can be very difficult to control as it may out-compete desirable turfgrasses and become a serious weed.

Mossy stonecrop can form dense mats in sandy soils with low fertility. Controlling mossy stonecrop with broadleaf herbicides is very difficult due to the waxy cuticle that limits herbicide absorption. Common broadleaf herbicides such as those that contain combinations of 2,4-D, dicamba, MCPP, MCPA or triclopyr may be effective, but will most likely require multiple applications. Using a surfactant (spreader/sticker agents) aids the herbicide in overcoming the waxy cuticle and will vastly improve the efficacy of herbicide applications.

In lieu of using a surfactant, trampling mossy stonecrop to break down the cuticle prior to making a herbicide application may improve control. A non-selective herbicide can also be used, but keep in mind it will also kill the turf. 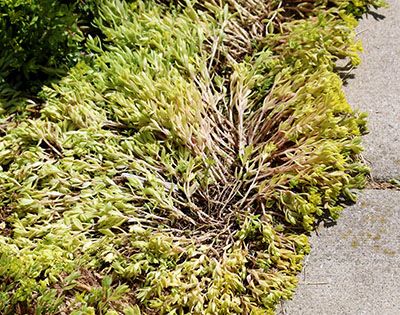 Sedum in an ornamental bed following a non-selective herbicide application.