Seedless watermelon – how do they do that?

Seedless watermelon has advantages and disadvantages, but everybody wants to know, “How do you grow watermelon if it doesn’t have seeds?”

Commercial production of seedless watermelon began in the 1990s. Since then it has steadily increased to be a major part of today’s watermelon market. Early seedless varieties did not have the sugar and flavor levels of seeded types, but plant breeders have improved these traits and new varieties no longer have these problems. 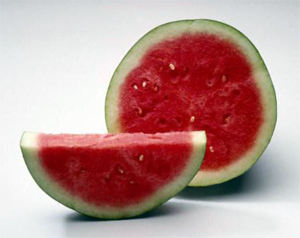 However, one problem that does continue is seed germination. Initially, seed germination of seedless watermelon was quite low. One solution is to keep seed warm (90°F) until it germinates and emerges from the planting media. Still, this is difficult in cool climates where well water can have temperatures in the 40°F range. Each time the seeds are watered it lowers their temperature.

On a small scale, warm temperatures can be maintained by watering transplant flats, covering them and letting them heat up in the sun in the greenhouse for a day or more. Then, plant the seed and cover them again until seedlings emerge. On a large scale, they can be placed in dark rooms heated to 90°F with 95 percent relative humidity and held until seedlings emerge. Either process will take four to five days. After emergence, seedlings are then finished off in the greenhouse for three weeks and then transplanted to the field late May or early June. Following these steps generally produces a more than 90 percent germination rate. High germination rate is important since seed of seedless types is quite expensive compared to seeded varieties.

Seedless watermelon fruit will have white seed traces, but only occasionally will it have a mature, brown, hard seed. Since the pollen of these plants is not viable, a diploid, seeded watermelon needs to be planted along with the seedless variety. The diploid will provide good pollen for the bees to move around and pollinate the flowers of the seedless variety. Viable pollen is needed to stimulate fruit set and growth, even though the resulting fruit will be seedless. These diploid varieties can be commercial, seeded types or simply be there as a pollen source.

Seed companies maintain diploid and tetraploid parental lines and then perform controlled crosses by hand pollination to produce seed. These additional expenses in seed production are what cause seed for seedless types to be more expensive. More watermelon information can be found at the National Watermelon Promotion Board website.