Setting the cutting schedule for your alfalfa

Cool, wet weather has delayed the time for alfalfa harvest throughout Michigan.

Alfalfa producers wanting to harvest alfalfa according to forage quality should keep a close eye on the growing degree days (GDD) in the next 10 to 15 days. The importance of harvesting a hay crop on time can make a big difference in the fiber and energy levels for alfalfa. There is usually a short window of opportunity to harvest alfalfa at a particular goal since neutral detergent fiber (NDF) levels can change rapidly with increasing temperatures. Many dairy producers have a goal of 40 percent neutral detergent fiber. Data collected over a period of years suggests that an upright silo should begin harvesting at 750 GDD for alfalfa with 40 percent NDF + 3 percent most years. The current recommendation for producers using bunk silos is to begin cutting at 680 GDD corresponding to value of about 38 percent NDF. Using GDD is an important tool that should only be used for first cutting.

Alfalfa GDD is calculated by averaging the daily high and low temperatures for a 24-hour day, dividing by two, and then subtracting the base of 41°F. The season total is the sum of daily growing degrees beginning March 1 through today. Anything less than 41°F gets zero GDD for the day. For example: the daily high and low for one day was 60°F and 40°F. The average is 50°F, minus 41°F (base), equaling 9 GDD. Current information is available at weather stations placed throughout Michigan. To get information for a weather station near you, go to the Enviro-weather website.

Growers with alfalfa and grass-mixed stands should not use the GDD method to establish your cutting schedule. Consider harvesting these fields before harvesting the pure alfalfa stands. Grasses have higher neutral detergent fiber content than alfalfa cut at the same age. Spring harvest of alfalfa-grass mixtures is based on alfalfa maximum height and the proportion of grass in the stand. So, consider harvesting fields that have the most grass first so purer alfalfa stands can be harvested at the appropriate neutral detergent fiber levels. If wet weather delays harvest, you may want to harvest the purest alfalfa stands first since fields with grass will likely be past the optimum neutral detergent fiber levels and may be better used for dairy rations requiring higher fiber or for dry cows and heifers. 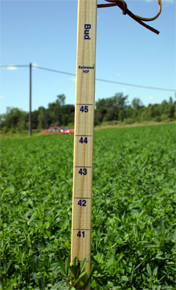 An example of a PEAQ stick measurement taken in 2008 during better growing conditions.

Another method for evaluating the current stage of maturity for alfalfa is the Predictive Equations for Alfalfa Quality (PEAQ) stick method. This method takes more time because you need to walk through your alfalfa fields and select several spots in the field to get an accurate reading. The PEAQ stick uses both alfalfa stem height and maturity to predict forage quality. One must be able to know the different stages of growth of alfalfa: early bud, mid-bud, late bud, early bloom and full bloom. A study conducted in six states across a wide range of environments estimated neutral detergent fiber within three units of actual wet chemistry in 77 percent of samples collected. PEAQ sticks should only be used for first and second cuttings of pure alfalfa fields that receive adequate moisture and growing conditions.

These methods are not foolproof. Other factors can affect the fiber levels of forages, but these are better than cutting by the calendar date.

Remember to be safety-conscious when working around equipment. Safety first!

COVID-19 vaccine videos for agriculture workers in English and Spanish

Details for excellence in agriculture