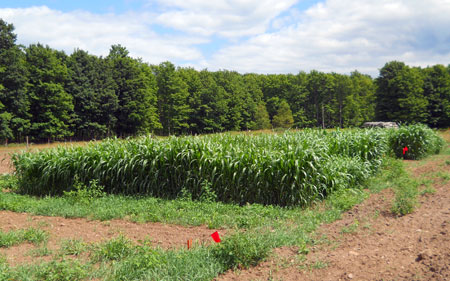 The cover crops were planted on June 29, 2011, and allowed to grow through the year with livestock grazing simulated by mowing off about half of the sorghum sudangrass and multi-species mixture in late September and leaving the mown material on the plots. This grazing was included to reproduce the way similar multi-species cover crops are currently managed on North Dakota farms.

After rototilling the cover crops in the spring of 2012, oats were planted. Oat yields were compared in August 2012 to determine the impact of the different soil-building cover crops after one year. Soil samples were also collected from each treatment before the trial, following the cover crop and following the oat crop. Soil test results were used to monitor soil fertility indicators, but were not meant to be conclusive and were not subjected to statistical analysis. No fertilizers were used in the trial.

Oat yield following the cover crop treatments in this trial gives a single indication of the impact of a single year cover crop treatment. Other factors, including weed suppression, were not included in this trial. This two-year trial was not expected to result in dramatic changes in crop yield or soil conditions. Cover crops are understood to be a long-term investment in soil health and crop performance with benefits becoming more apparent over several seasons.

The sorghum sudangrass and multi-species cover crop treatments resulted in better oat yields the following year, compared to red clover and fallow treatments. Soil testing before the trial showed a fertile soil high in organic matter. The organic matter dropped during and after the trial, probably due to thorough tillage of the pre-existing old sod prior to seeding cover crops and resulting oxidation and decomposition of raw organic matter. The inclusion of a cover crop can be expected to help maintain soil organic matter following the initial plow down of an old, dense sod and in following cropping years.

Cover crop seed cost and the impact of cover crop treatment on oat yield during the following year were used to create a simple economic comparison.

Conclusions of the trial:

The complete report of this project can be viewed at Comparing multi-species and mono-culture cover crop systems to improve soil fertility and crop performance in Michigan’s Upper Peninsula. You may also visit the MSU Cover Crop website for detailed cover crop information.

Protecting yourself and your farm employees from COVID-19

New products in the news: Are you reading a sales pitch?