A series of workshops to inform Local Government Authorities on the Agricultural Sector Development Program (ASDP 2). The next one is in Morogoro, Tanzania, April 24–29, 2017. 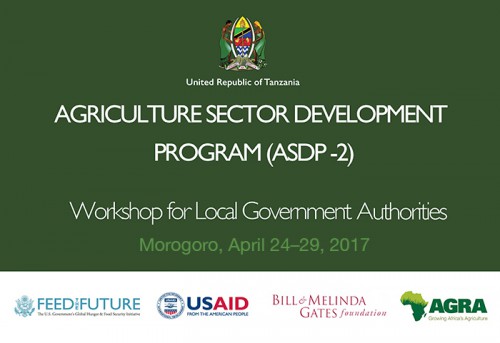 Tanzania is set for the second phase of the Agricultural Sector Development Program (ASDP 2), which will guide investment in the sector over the next ten years.

FSP ASPIRES has partnered with two Government of Tanzania Ministries (MALF and PO-RALG) and three USAID implementing institutions (Africa Lead, AGRA, and PS3) to support ASDP 2 initiatives through  workshops. The goal is to develop a common understanding of the program’s objectives and targets, implementation modalities and coordination framework among the Local Government Authorities. Given that Local Government Authorities are the main implementers of the ASDP II, the workshops will train over 1,000 LGA leaders and executives across 5 zonal workshops to empoweri them as custodians of ASDP II. It is expected that the ASDP2 workshops will make LGAs more conversant with the program, its components, sub-components, priority investment areas, and the projects and the fiscal reforms that will take place. The zonal workshops will take place first in Dodoma, then Mogorogo, Mwanza, Mbeya, and Iringa. Morogoro’s workshop is April 24th through 29th 2017.

Key successes to unfold from the ADSP 2 workshops include: