Ground nesting, solitary bees are important early-season pollinators. Only use cultural control methods to control them.

Several people have called the Michigan State University Diagnostic Services lab this past week complaining about ground nesting bees in their yards. Solitary bees begin to appear during the first warm days of spring. The adults are only active for a few weeks, so they are a temporary nuisance. Some people may feel the urge to kill them off with insecticide—please don’t. They are important early-season pollinators. They are not aggressive; they rarely sting and their venom is rather weak.

Most ground nesting bees belong to the families Colletidae, Andrenidae, Megachilidae and Halictidae and are commonly referred to as mining bees, cellophane bees, digger bees, plasterer bees, sweat bees, leafcutter bees and mason bees. The most common early season species in the Midwest are Andrena spp. and Colletes spp. Both genera are important pollinators of spring crops like apples, blueberries and cherries. Solitary bees range in size from 0.5-0.75 inches, and may be a variety of colors such as blue, green, copper or metallic red. 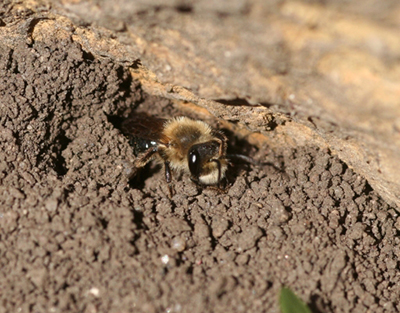 Female solitary bees excavate nesting tubes during the evening hours. The tubes reach six or more inches in depth. Small mounds of excavated soil may appear around each nest opening. They often nest in large congregations with many nesting holes arranged very closely together. During the day, the active females collect pollen and nectar to carry back to the nest. A single egg is laid upon the pollen ball in March, April or early May. After hatching, the larva feeds on the pollen and develops within the tube until it reaches adulthood in the fall. The new adult remains in the burrow throughout winter until emergence from the ground in March or April. At this time, mating takes place and bee activity begins to pick up as the nesting cycle resumes. Most activity at nest sites in early spring are males looking to mate. Male bees cannot sting.

Damage to lawns and turf is usually minimal and control is often sought because the bees are perceived as a danger or annoyance. Solitary bees rarely sting and there is no mass attack as might be found with honey bees and yellowjackets. Outdoor activities, including lawn mowing, can often be continued with no problem. However, with very large aggregations, you may prefer to avoid the area for four to six weeks while the nesting is taking place.

Controlling solitary bees in yards should only include cultural control methods. MSU Extension suggests the best method is to establish dense turf in the area the bees favor. Heavy watering or irrigation with a lawn sprinkler during the nest-building period may also help discourage nesting behavior. If the soil or location is not conducive to a healthy, dense lawn, then using ground covers or heavy mulches may be an alternative solution. Mulches may be used on bare patches caused by heavy traffic where grass will not grow.

If you want to make your yard welcoming to solitary bees, visit these MSU Extension resources: