Little to no progress has been made in planting corn and soybeans across the southwest region, while wheat has greened up and has been growing where conditions have been warmer. 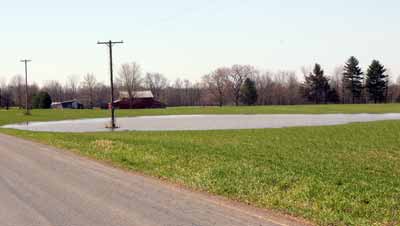 Two words: cold and wet. A heavy rain and snow mix that fell on the morning of April 25 continued to leave soils saturated and frigid. There may be a light at the end of the tunnel, at least to the subnormal temperatures. The NOAA 6-10 and 8-14 Day outlooks suggests that the region may be turning warmer, with temperatures returning more towards the normal range during these time frames. The outlook for above normal precipitation remains with us in both forecast periods. This means that we could be dealing with very narrow windows of opportunity to prepare and plant fields during the first two weeks of May, our traditional target date for optimal planting. However, the one month outlook is looking at drier conditions centered over the lower portion of Michigan, suggesting that a drying trend during May could lead to more favorable conditions later in the month. 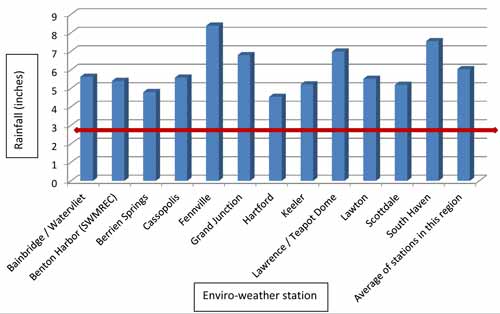 We have virtually made little or no progress in the last week or so. Maybe a little fertilizer was spread. As far as I can tell, no corn or soybeans have been planted across the region. Winter annual weeds have been growing, but at a slower pace than you might expect.

Michigan State University Extension’s Jon Zirkle from St. Joseph County reported catching a single black cutworm moth in a trap in central St. Joseph County. This does not represent an intense moth catch that would signify a threshold, but does point out that at least a few cutworm moths have made the migration to Michigan. Be prepared to control winter annual weeds to keep their growth from causing issues with tillage and seed-to-soil contact when planting. Also keep in mind to scout fields that have green mats of winter annuals for cutworm issues later in the season. Field crops entomologist Christina DiFonzo wrote an excellent resource on black cutworm issues during an outbreak in 2011 that answers many cutworm questions.

Another weather-related challenge is the lack of opportunity to burn down cover crops. Wet, cold and windy conditions have kept growers from being able to spray herbicides to kill off annual ryegrass cover crops. This sometimes can lead to challenges with incomplete kill with the cover as the crops develop.

Palmer amaranth continues to spread in southwest Michigan. MSU weed control specialist Christy Sprague reported at winter meetings that populations had been confirmed in Barry, Cass and Kalamazoo counties. Most, if not all, of the new infestations have been found where dairy manure was spread on fields. You may want to consider asking dairy producers if they are feeding fuzzy cottonseed in their rations before allowing manure to be spread on your farms.

Be sure to keep the MSU Extension weed control program website on your “radar” screen for late breaking developments in weed control. Visit the site at www.msuweeds.com.

Wheat has greened up and has been growing where conditions have been warmer. The southeastern portion of the region has had much more significant growth than colder locations closer to the Lake Michigan shoreline. Nitrogen applications really greened up the crop on lighter soils.

We have put armyworm traps out to monitor for moth flight activity in limited locations in southwest Michigan. Standing water in a few fields may cause some flooding injury, particularly in Allegan County. Cool temperatures may have helped to reduce injury where waters receded more quickly. Continue to monitor stands for winter annual weed growth activity.

Growth has been slow across the region. Most growers have been topdressing potash on fields. I have not seen issues with alfalfa weevil.

Other field crop regional reports from this week