Hot and muggy conditions gave way to several rounds of severe thunderstorms on Tuesday and Wednesday, June 17-18. The primary threat from these storms was heavy rainfall and damaging winds, although there was a scattered amount of hail reported as well. Several fields near Decatur/Lawton, Michigan had corn that was significantly lodged from the one to two punches of high winds and torrential rainfall. More significant rainfall totals were recorded in Ottawa County, where standing water in fields was very common.

Warm and wet conditions continue to be favorable for crop growth. The average growing degree days (GDD) base 50 accumulated since May 1 is 753 in Constantine, Michigan, and 673 in Coldwater, Michigan. We normally accumulate 17.8 GDDs each day over the next five days, increasing to 19 GDDs each day from June 23-28.

Advanced corn is V8-V10. Most corn is V6-V7. Growth rate remains excellent with the ample rainfall. Seed corn and commercial corn sidedress nitrogen (N) continues. Corn height is forcing a change in plans for applying nitrogen, moving to high boy dribble and even some aerial applications of N in limited cases. Storms lodged significant acreages of V4-V6 corn on Wednesday, June 18. We normally would expect this size corn to grow with goose-necked stalks, but to have little overall yield damage. Thankfully, green snap was held to a minimum. The larger challenge occurs if the fields have not been sidedressed yet. Application methods that limit field wheel traffic would reduce injury, such as large boom dribble operations with high boy sprayers or aerial application of urea.

Corn has outgrown most insect feeding this season. Industry sources in St. Joseph County have reported seeing some European corn borer activity. As we move through the western corn rootworm hatch, we need to keep in mind that wind lodging of corn plants will be a factor, and roots should be dug and washed to determine if rootworm feeding caused the lodging. Rootworm damage ratings can be taken shortly after we see beetle emergence, which generally coincides roughly with the timing of silk emergence. 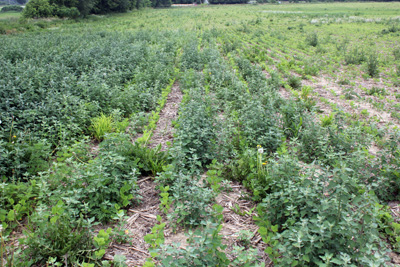 Early planted soybeans are approaching or are at early flowering. There are a lot of fields around the two to four trifoliate stage and growing rapidly. Weed control ranges from excellent to really bad, mostly due to growers having to choose their battles in the narrow spray and sidedress windows we have had available. Preemergence programs look good right now. Watch weed heights, especially in lambsquarters and giant ragweed where glyphosate is being applied. Also, don’t forget about volunteer corn, which is very abundant in many fields across the region this year and can cause issues with rootworms in rotated corn next year. We will be stepping up looking for rootworm beetles in soybeans in July and August to re-visit the question of how prevalent the rotation resistant variant is in southwest Michigan.

What’s coming up next in corn-soybean pests? Western bean cutworm, a pest that burst onto the scene in 2006 and 2007 in Michigan, has somewhat quietly subsided in intensity in Southwest Michigan over the past couple of years. Michigan State University Extension research conducted by entomologist Christina DiFonzo and Extension educator Fred Springborn in the heavily infested area of Montcalm County has revealed that increases in egg mass parasitism and predation, as well as potential fungal pathogens, have helped to reduce the numbers of western bean cutworm larvae and damage in areas where this pest has been active for several years.

Currently, western bean cutworms are still underground, but typically will begin to emerge in late June to early July. We have seen that cold soil temperatures can delay emergence, and it is likely that the moths will be delayed this season due to cool temperatures this spring.

Their relative numbers can be monitored using “milk jug cutout” pheromone traps placed adjacent to corn fields. Trap catches peak in late July-early August. Keep in mind that egglaying and damage from these pests is highly correlated to fields that are just shooting tassels. Fields that have mature tassels emerged and pollen shed generally are not attractive for egglaying and may escape injury completely, so trap counts alone do not necessarily predict potential damage to a field.

Egg masses are often found on the upper leaf surfaces on the top three to four leaves of early tassel or pre-tasseling corn. Egg masses create shadows on the leaves if you observe leaves in bright sunlight.

First cutting alfalfa harvest is pretty much wrapped up. We are starting to see a few more potato leafhoppers in the area, but they are still at modest levels considering how many times the winds have been out of the south or southwest.

Early wheat is just beginning to turn in some locations around here. Head scab levels are quite low in fields in Southwest Michigan that I have walked recently. Many fields were treated with fungicides to protect the crop from scab. However, some of the fields that were not treated are beginning to show substantial levels of leaf disease, especially powdery mildew in the upper leaf canopy. The warm and extremely humid conditions of this week have been just about perfect for the development of leaf diseases. 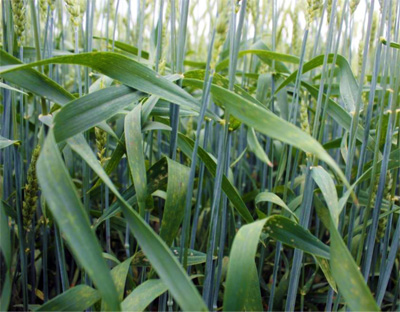 A quick look at the heads on this wheat field shows promising yield potential, but the speckling on the upper leaf surface and white pustules on the bottoms of the flag leaves suggest that powdery mildew may play a role in the final yield.

MSU‘s Weed Control Field Day is scheduled for July 2 at the MSU Plant Pathology farm, located on the west side of College Road north of Jolly Road. Pre-registration is $25 per person by June 25 and includes lunch. On-site registration is $35. Refreshments begin at 8:30-9:30 a.m. with the field crop tour running until 11:30 a.m., the non-GMO soybean weed control tour runs from 1-3 p.m., and the vegetable tour with MSU’s Bernie Zandstra starts at 1 p.m. at the Horticulture farm south of Jolly Road on College Road. This excellent event is a great way to evaluate herbicide options and their performance in these important crops. Registration information is available at www.msuweeds.com.

Our next IPM Breakfast Meeting will be held June 24 at the Royal Cafe in Centreville, Michigan. Our invited guest speaker is Martin Chilvers, MSU field crops plant pathologist. The IPM Breakfast Meeting is a discussion of current crop conditions, pest infestations and agronomic practices used in the production of field and specialty crops grown in Southwest Michigan. The collective discussion between growers, agri-business professionals and crop consultants in attendance is summarized in this report. The group meets every other Tuesday at 7- 8:30 a.m. during the early growing season.

Resources available for reducing impacts of the 2014 cool, wet spring and planting delays