Recent wet conditions have left standing water in some fields in the southwest region; however, most of the lower areas will avoid stand loss.

We saw some much needed rainfall during the evening of May 21 and afternoon of May 22. Conditions had become very dry over the last couple of weeks across southwest Michigan. Rainfall totals ranged from around 0.5 to over 2.5 inches across the region. The higher rainfall amounts are closely associated with relatively narrow thunderstorm tracks. Some areas around Van Buren and Cass counties had standing water in fields following the rainfall on Wednesday afternoon (May 22). 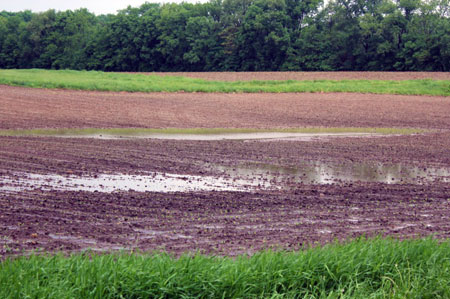 With cooler temperatures in the forecast, I anticipate most areas will avoid stand losses in most of the lower areas impacted by this standing water. Looking at the 6-10 day outlook, enjoy the cooler temperatures over the holiday weekend. NOAA is expecting our region to return to substantially warmer than normal temperatures in both the 6-10 and 8-14 day outlooks. We are also expected to retain favorable moisture conditions with above normal precipitation during these periods.

Early planted corn has generally grown out of the frost damage seen over Mother's Day night (May 12). Advanced fields are at V2. Warmer temperatures spurred rapid growth over the last week. Most of the corn recently planted is at least spike. Some fields that were planted in extremely dry conditions on light soil may have some uneven emergence. The recent rainfall should help to get straggling seedlings moving.

For the most part, the crop looks good. The warm temperatures have also pushed grass weed seedling emergence along. Keep in mind that delayed pre-emergence programs only will control grass that is less than 1 inch in height.

Fairly sizable giant ragweed is common in fields I have walked this last week. As we are expected to return to warm temperatures this next week, keep an eye on the size of the weeds and the crop if you are going to apply delayed pre-emergent programs. Review Table 1G on Page 46 in the Michigan State University Extension 2013 Weed Control Guide for Field and Forage Crops for maximum crop height for delayed pre-emergence programs. 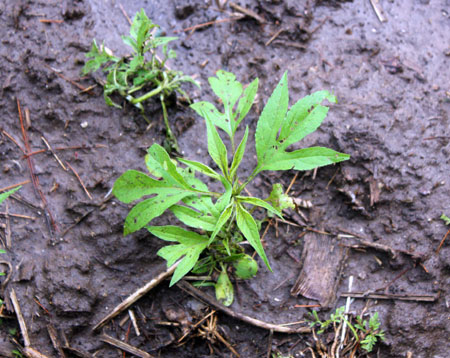 Giant ragweed in corn field edge in Cass County. This weed species
seems to be off to a particularly "good" start this season.
Photo credit: Bruce MacKellar, MSU Extension

If fields had winter annual weeds prior to planting, be sure to scout for black cutworm damage as the plant emerge up until about V4 , or maybe a little bit longer. Damaged plants will be clipped near the soil surface. Larvae hide out underground during the day, so early morning scouting can help you to find the culprits.

There is a threat of frost with the passage of the cold front over the next couple of nights. Let's hope that we do not see a return to the temperatures we saw on May 13; corn has advanced to the point where those kinds of conditions would be less tolerated now, particularly on fields that suffered injury before.

Early planted soybeans I have seen are at the unifoliate leaf stage. Most stands look good. Some of the later planted soybeans were planted into soil with little soil moisture, which can be a recipe for trouble. The recent rainfall should help that situation. Because primary tillage was conducted in fairly wet soils this spring, many growers used crumblers and other clod-busting tools in final field preparations this spring. We did receive some fairly intense rainfall over the last few days in several areas. Growers may want to evaluate fields for crusting potential as conditions begin to dry out over the next few days. Rotary hoes can be used to alleviate crusting, but should not be used while the soybeans are in the crook stage. Bean leaf beetle feeding has been light in fields I have walked.

Wheat is looking more variable in color and condition than it was two weeks ago across the region. There are a lot of fields that have yellowing patches that continue to grow in size. There does not seem to be one answer to the challenges we are seeing. Light-textured and colored soils are showing the most yellowing. The most logical thought is that it is caused by nitrogen deficiency from N that leached following April's heavy rainfall. While this undoubtedly has played a role, there may be other factors that play as well. Some of the unevenness may be attributed to the dry conditions over the last couple of weeks. Areas that have higher weed populations also seemed to have stressed the stands more than usual. Finally, there is the issue of the Mother's Day frost (May 12). 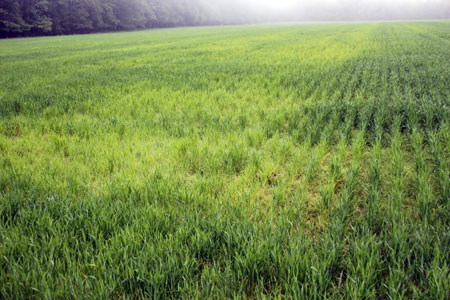 Wheat field showing large variation in color in Van Buren County.
These yellowed patches are closely associated with areas of
bluegrass infestation. It is not clear if the yellowing is caused by
competition for nitrogen or water in this case. Fields with excellent
weed control are also showing yellowing patterns following
nitrogen fertilization this spring. Photo credit: Bruce MacKellar, MSU Extension

The flag leaf is just emerging in the fields I have walked this week. Leaf disease incidence and severity are very low. Keep an eye out for armyworm feeding as the flag leaves develop and the heads begin to emerge. Also, with the return of warmer and wetter conditions, be prepared to scout for leaf diseases over the next couple of weeks.

Kent Feldman, manager of the Schoolcraft Branch of Co-Alliance, has offered to help host the IPM Breakfast Program in St. Joseph County. Jon Zirkle, former St. Joseph County MSU Extension agricultural program instructor, helped to organize the meetings for the 2013 growing season. The programs will be held on Tuesday mornings through early July at 7 a.m. at the Amish Table restaurant, located in Centreville, Mich., just east of the St. Joseph County fairgrounds on M-86 on the north side of the street.

The round-table discussion will begin as breakfast is served, with a featured speaker for most of the meetings. The meeting will not last longer than 8:30 a.m. so that participants can get back to their operations.

RUP and CCA credits will be requested for these meetings. There is no registration fee – you just need to pick up the cost of your breakfast. For more information, call the St. Joseph County MSU Extension office at 269-467-5511. Hope to see you there!