Fruit buds have burst and leaves and flowers are emerging quickly. Growers have protectant sprays on before the rains later this week.

Last week srtarted out cold with highs in the 50s and lows below freezing. Several freezes with lows in the 20s caused no additional damage. Freeze injury from the April 5 freeze and April 9 freeze is getting easier to assess.

Warm weather later in the week and through the weekend with highs near 80 and lows near 40 pushed plant development rapidly in southwest Michigan. Tree fruits are now susceptible to injury at temperatures in the mid- to upper 20s. Bloom has begun in stone fruit.

Warm temperatures are forecast for this week with highs in the 60s. Last week was dry, but there is a good chance of rain Wednesday and Thursday, April 20-21, so growers should be applying disease prevention materials to protect newly expanded flowers and foliage. No freezes are in the forecast, but we still have a chance of a damaging freeze until early to mid-May.

Many stone fruit are in bloom and should be protected from blossom brown rot. Growers have been applying oil sprays for control of San Jose scale and mites. Green fruitworm moths have been flying for several weeks. Larvae from this insect are among the first to target fruit after petal fall. Oriental fruit moth flight should start in a few days.

Apricots are in bloom. Damage from freezes two weeks ago was widespread, but most growers report they still have viable flowers and fruit set. As the first tree to bloom, apricots are most likely to be hurt by spring freezes, but not all the flowers are needed for a full crop. If only 25 percent of the flowers become fruit, most growers would consider it a full crop, which still need to be hand-thinned to remove small fruit and promote growth of the remaining fruit.

Peach are beginning to bloom with some sites and varieties already at full bloom. There seems to be light damage from the April 5 and 9 freezes, although some growers in less favorable sites report significant fruit bud damage. Peaches generally have many more flowers than are needed and they are thinned several times to ensure a crop of large fruit and prevent limb breakage. Growers will assess the crop in several weeks as the fruit emerges from the shuck and the effectiveness of the pollination during bloom can be seen. Growers should apply sprays to reduce blossom brown rot. Oriental fruit moth flight should start soon, providing the biofix for timing sprays against the larvae which can cause flagging damage on branch tips of young peach trees. The rain expected later this week will favor bacterial spot infection of young leaves.

Sweet cherry bloom has begun. Sweet cherries probably show the most damage of all the tree fruit from the early April freeze events. Damage appears worse in areas away from Lake Michigan, which were more advanced due to warmer temperatures. Sweet cherries are very susceptible to brown rot, so Michigan State University Extension suggests growers apply sprays to reduce blossom brown rot.

Tart cherry flower buds are at green tip to bud burst. There was little if any damage to tart cherries. Crop potential for most sites is good to excellent.

Japanese plums are blooming. Damage in Japanese plums varies greatly by variety and location. Some suffered considerable loss, others very little. Like peaches, Japanese plums often require extensive hand-thinning. Abundant flowers and fruit seen in some varieties may still provide a good crop. A more accurate assessment can be made several weeks after bloom when fruit set is apparent. Japanese plums also need to be protected from blossom brown rot.

European plums are at tight cluster to very early white tip, and suffered little damage from the April freezes. As shoot growth begins, plums need to be protected against black knot.

Apples are at tight cluster. Early varieties such as Zestar are at open cluster to first pink. Apples appear to have suffered little damage. Loss of the king bloom has been reported in the early varieties. Apple scab ascospores have been trapped over the last month in relatively low numbers, but should increase sharply with the next rain. Several scab infection periods have been recorded throughout the region. Leaf scab symptoms could begin to appear later this week. 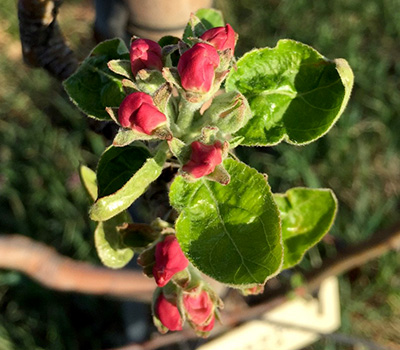 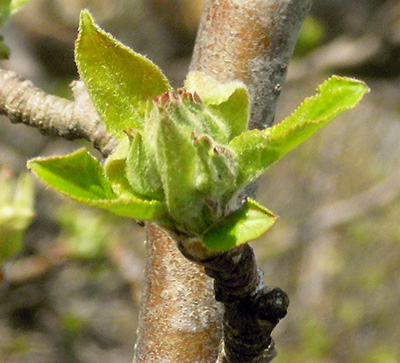 Red Delicious, a later bloomer at tight cluster. The petals are not visible. Photo by Mark Longstroth, MSU Extension.

Pears are at tight to open cluster. Pear psylla adults are flying. 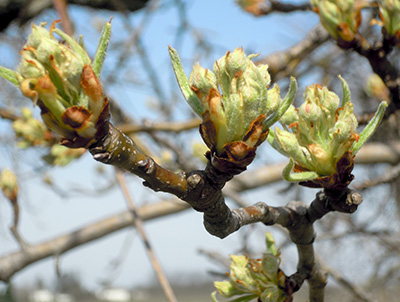 Juice grape buds are at early swell and green can be seen on some buds. Vinifera wine grapes have not started to swell. There does not appear to be any damage to grapes from the winter or spring freezes. There is still time for final dormant sprays to reduce disease inoculum of powdery mildew, Phomopsis, black rot and Anthracnose – sulfur or copper can be sprayed onto sensitive varieties until new growth becomes visible.

Grape flea beetles and climbing cutworms will begin feeding soon in vineyards where they are present. Where problems have appeared in the past with these pests, scouting should occur weekly from now until 3 inches of growth. 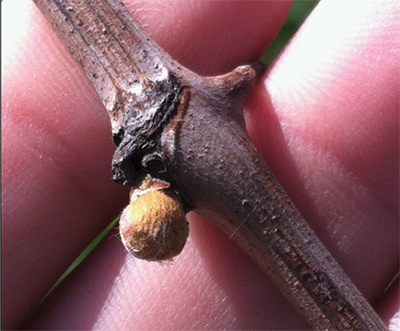 Blueberry flower buds are at bud burst (pinecone). There does not appear to be any damage from the winter or spring freezes in blueberries. Green leaf tissue is exposed and growers should apply treatments before this week’s rain to reduce Phomopsis and mummy berry. 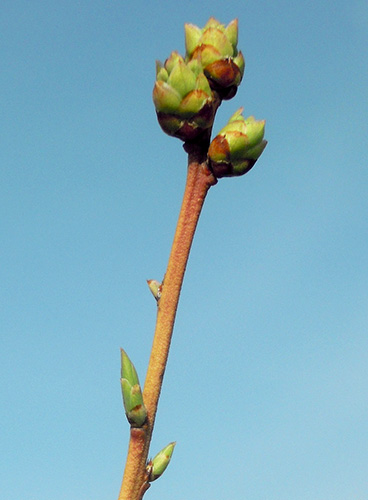 Bluecrop blueberry development. The large flower bud at the shoot tip is opening. The leaves have emerged but have not yet begun to unfold. Photo by Mark Longstroth, MSU Extension.

Bramble growth is well underway. Leaves are unfolding in raspberries and the flower clusters can be seen. Pruning should be completed. Growers report a strong emergence of weeds this week with the warmer temperatures.

Our next Monday fruit IPM meeting in southwest Michigan is April 25 at 5 p.m. at Fruit Acres Farms, 3452 Friday Rd, Coloma, MI 49038. Two Michigan pesticide applicator recertification credits will be given for these meetings.

The Van Buren County Blueberry Pre-bloom meeting is Thursday, April 21, from 5:30 to 8 p.m. at Haven Harvesters in South Haven, Michigan. Another meeting is planned for Ottawa County on April 28. The meeting in South Haven is sponsored by Haven Harvesters LLC and New Age/Landmark Laboratories, who will be providing a light supper at the beginning of the meeting. There will be talks on early season insect and disease control by MSU Extension fruit specialists and educators. Other topics will include early season frost and freeze control, pollination and early season weed control.

Haven Harvesters is located at 165 Veterans Drive, South Haven, MI 49090. Two Michigan pesticide applicator recertification credits will be available to attendees. No registration is necessary for this meeting which is open to all blueberry growers and consultants in southwest Michigan.