Freezes last week caused little damage, cherries and peaches are blooming and warmer weather this week will speed up plants.

Last week was cold with highs in the 40s and 50s and lows in the 30s and 20s. There were radiation freezes on Thursday, April 23, 2015 and Friday, April 24, 2015 when temperatures dropped into the upper to mid-20s. There was very little damage from these freezes due to several factors, the most important being light winds Friday morning which actually raised temperatures before dawn. Another factor was extremely low due points which prevented the formation of frost on the buds and allowed the buds to super cool rather than freeze in the low temperatures.

This week’s high temperatures are forecast in the 50s and 60s with lows above freezing. There is a chance of showers mid-week, but the forecast is generally for dry, sunny conditions, excellent for pollinating flowers. Soils are generally moist and soil temperatures are around 50 degrees Fahrenheit.

Bloom is underway in stone fruit and moving slowly due to the cool weather. Honey bees have been moved into many orchards and are pollinating blooms. Open flowers were damaged by freezes last week, but not severely. Rains during bloom can be a problem in stone fruit. Cold rains and freezes are conducive to bacterial canker. Warm rains during bloom can lead to blossom brown rot in stone fruit. As leaf tissue becomes available, warm, wet conditions are conducive to bacterial spot, a disease of peaches and plums.

Fruit development continues to be spread out across the region with southern orchards more advanced than sites to the north. See “Freeze damage depends on tree fruit stage of development” by Michigan State University Extension for more information about the susceptibility of specific flower stages to below freezing temperatures.

Apricot bloom is ending and most fruit is in the shuck. There was significant damage to apricots with the Friday morning freeze, but live fruitlets were easy to find Friday afternoon. Live fruit will become more apparent as fruit swells this week. Crop potential is still good.

Peaches are at pink calyx to first bloom. There was little, if any, damage to peaches from last week’s freezes. Winter-damaged fruit buds have dropped from the trees and bloom makes it easier to determine the crop potential. Like 2014, we are seeing some branch ends shrivel and die from winter injury. Some low lying orchards have few or no viable fruit buds due to winter losses. Damage away from Lake Michigan is more severe than in traditional growing areas on elevated sites close to Lake Michigan. Elevated sites with good air drainage fared better this year than last. Crop potential is better in southern Berrien and eastern Van Buren counties this year than in 2014.

Sweet cherry bloom has begun with a few sites at full bloom. There is a wide variation in bloom development between varieties and sites. Early varieties began to open last week. With last week’s cool temperatures, bloom development has been slow and there are still many unopened flowers. Freeze damage to sweet cherries seems to be restricted generally to the open flowers with little damage to closed flower buds. Browning of petals was a common symptom, but damage to flower pistils varied also by exposure to the sky where flowers facing the ground were less damaged than those facing the sky. Sweet cherries are sensitive to copper, so avoid spraying copper when green tissue is exposed.

Tart cherries are at bud burst to first white. There is little damage to the flower buds from last week’s freezes. Tart cherries are tolerant to copper and copper applications may help reduce bacterial canker in cherries. 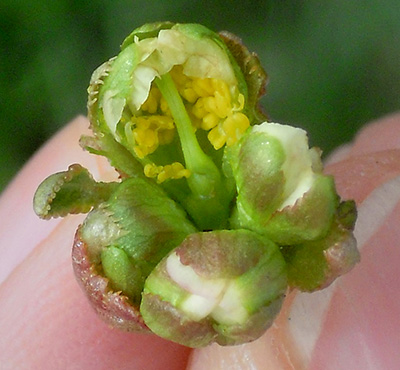 Closed flower buds were not hurt by Friday’s freeze. The green pistil in the bud indicates this flower was not damaged by the cold Friday morning. Photo credit: Mark Longstroth, MSU Extension

Japanese plums are at full bloom. There was some slight damage to flowers from the Friday freeze, but most flowers seemed unaffected by the cold. European plums are at tight cluster to first bloom. Little, if any, damage is expected in European plums, which were less advanced and more tolerant of freezing temperatures.

Apples of the early blooming varieties, such as Zestar and Ida Red, are at first pink to full pink in Berrien County, but most varieties are still at tight cluster (squirrel ears). At least two apple scab infection periods have been reported for the region. First symptoms are predicted to appear the first week of May. We have left the window for copper applications for scab control and fire blight management.

We have had numerous reports of abundant sooty growth on trunks and scaffold limbs, sometimes associated with large pruning cuts. This is apparently non-pathogenic fungi growing on gum and ooze that came from winter-damaged trees and poorly healed pruning cuts. 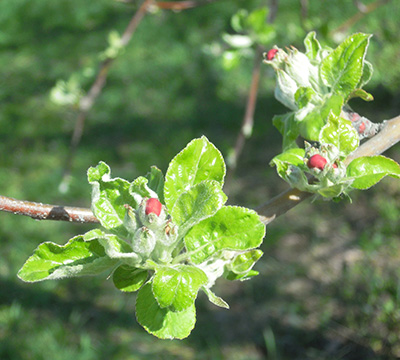 Ida Red apples at the pink bud stage. This bud stage should withstand temperatures to 27 to 28 F with little damage and suffered no damage in Friday’s freeze. Photo credit: Mark Longstroth, MSU Extension

Pears are at tight cluster. Pear psylla are flying.

Grape buds are still at first swell with most buds on Concord and Niagara showing no color. Last week, many buds showed a little color. There was no movement or even backward movement in last week’s cold weather and there was very little damage to grapes in Friday’s freeze. Apparently the dew point on Friday was so low that closed buds were able to super cool to temperatures well below that which we would normally see damage. See “How cold can grapes go?” for more information. 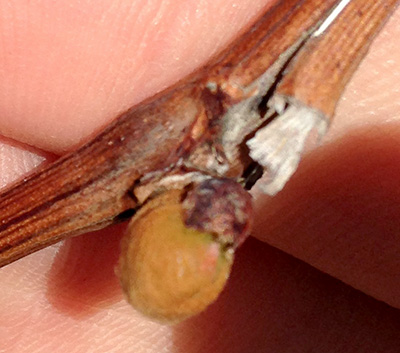 Concord grape bud at early swell, showing brown bud covering. This bud stage should withstand temperatures down below 20 F if there is no frost. Photo credit: Brad Baughman, MSU Extension

Winter injury to grapes is becoming very apparent in many sites. There is cold damage to buds on the cordon and to the trunk cambium. Growers should examine the trunks for damage to the cambium just above the snow line. Vine collapse during the summer due to trunk damage was common last year. Some growers have aggressively removed damaged trunks while others are waiting to see if growth occurs on the cordon. See “Pruning severely winter-damaged grapevines in Michigan” for more information.

As vines begin bud swell, it is time to scout for damage from grape flea beetles and climbing cutworms. At late bud swell and bud burst, grapes can be severely damaged by temperatures below 30 F. Once the buds burst and shoot growth begins, growers will need to focus on early-season disease control.

Blueberry flower buds are beginning to burst. At this bud stage the plants can withstand cold temperatures down to the mid-20s with little damage. As the plants green up, winter injury becomes easier to assess and many growers report less injury than last winter. Flower buds injured by winter cold expand slowly if most or all the flower buds inside are dead.

Leaf buds have elongated and leaves are beginning to unfold. Green leaf tissue is susceptible to mummy berry shoot infections. Warm, dry weather will cause mummy berry trumpets to age more quickly. Growers should scout their fields to assess their risk of mummy berries. Early mummy berry shoot strikes should be visible soon after the shoots start growth. These early shoot strikes are easily blown off the bush by windy conditions.

Strawberry flower trusses are visible in crowns and flowers should emerge with warmer weather. Some strawberry growers used sprinkler systems to protect exposed flower buds last week. Flower bud trusses in the ground can withstand temperatures down to 10 F. Once the flower buds emerge from the ground, they are damaged by 20 F temperatures.

Bramble buds have burst and leaves are unfolding. Winter injury to floricanes is becoming easier to assess. Damage to blackberries is widespread. Red raspberries are less affected and black raspberries generally look good. Primocane shoots are beginning to emerge from the soil. Once the buds have opened, it is too late for lime sulfur to be applied. Most flower buds are not exposed and plants can withstand temperatures into the mid- to lower 20s with little damage. 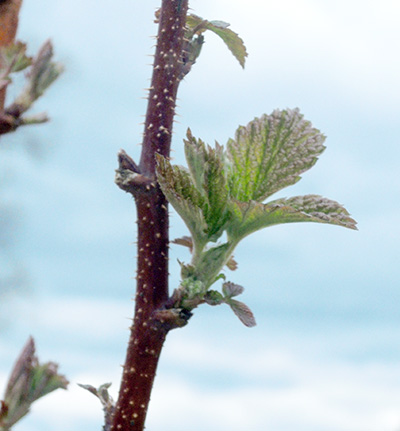 One bud on this red raspberry floricane is developing normally and the flower cluster is visible in the base of the bud. Buds with only a few small leaves were damaged by winter cold and buds with no growth were killed in the winter. Photo credit: Mark Longstroth, MSU Extension

Growers have finished up pruning and are applying early season sprays, including weed control sprays. Some growers are tilling row middles to expose soil as an aid to help ward off spring frost injury. Soils should not be fluffed up to the point that the top layer dries out and keeps heat from moving out of the ground during cold nights. See “Bare ground is warmer” for more information.

Our next Monday fruit IPM meeting is May 4 at Fruit Acres Farms, 3452 Friday Rd, Coloma, MI 49038 at 5 p.m. Two Michigan pesticide applicator recertification credits will be given for these meetings.

The Ottawa County Blueberry Pre-bloom Management meeting is April 30 at 5 p.m. at the Ottawa County Fillmore Complex, 12220 Fillmore St, West Olive, MI 49460, in the Board Room. The Board Room is on the upper level just off the main lobby. Refreshments will be provided.