After a cold March, fruit and other perennials are slowly starting growth.

The winter was relatively mild with only a few cold snaps and little winter damage is expected. Plant development is behind normal. March was unusually cold with temperatures seldom warm enough for plant growth. Comparing the growing degree days for the last five years at the Southwest Michigan Research and Extension Center (SWMREC) show that we are behind normal, but similar to 2011 and 2008.

High temperatures in the 50s late last week (March 24-30) allowed early budding plants to begin growth. This week (March 31-April 6) will continue cool with temperatures below freezing at night which will hold back growth. Next week (April 7-13) will be warmer with lows above freezing and possible showers, so next week has the possibility of the initial infection event for many fruit diseases. There is still time to apply dormant treatments to protect crops. You can check for a local weather station at Enviro-weather.

Growth is just beginning. At this stage of development, it would require extremely cold temperatures to damage the tree fruit buds. (See the Michigan State University Extension article “Freeze damage depends on tree fruit stage of development.”) Some growers and especially homeowners have reported damage from rabbits, but not so much from mice.

Many fruit plantings had much less nitrogen applied last season as growers adjusted for low crops. As a result, some plantings may be coming into 2013 with less available stored nitrogen in wood and buds than normal. Watch for signs of early season nitrogen deficiency. Growers using early season copper sprays should examine the labels of the products they are contemplating as products differ greatly in their metallic copper concentration. (See the MSU Extension article “Copper formulations for fruit crops.”)

Early season oil and insecticide sprays for San Jose scale, mites and aphids are a good option if weather permits. Oil sprays should not be applied if there is a danger of a freeze in the next two days.

Apricot buds are beginning to swell. Some varieties show no movement at all. 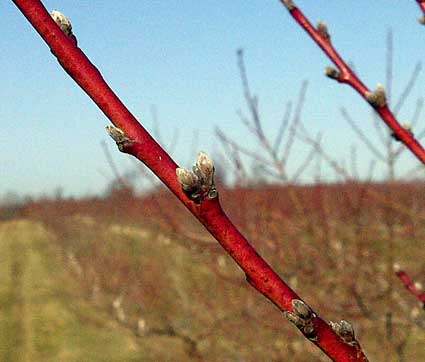 Photo 1. Peach flower buds are beginning to swell. The two flower buds in the center of the picture have begun to swell. The smaller, pointed leaf bud between them has not yet started. You can see the difference between leaf and flower buds in the pair of buds in the lower right. The plump is a flower bud and the thin conical bud is a leaf bud. Peaches are the easiest fruit trees to distinguish between flower and leaf buds. Photo credit: Mark Longstroth, MSU Extension

In cherries, sweet cherry buds are beginning to swell. If you are going to apply copper to reduce bacterial canker, next week when it warms up will be the end of that early season window and buds will be breaking.

Tart cherry buds are generally tight; some are beginning to color, indicating growth has begun.

In plums, Japanese plum buds are at early white side (Photo 2), while only a few European plum buds show signs of movement. 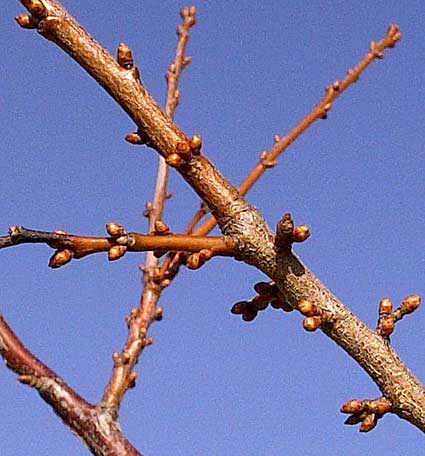 Apples show little movement. There appears to be abundant fruit buds due to low crops in 2012. Powdery mildew was a significant problem in many apple plantings last year, perhaps resulting in greater than normal numbers of infected terminal buds this spring. A copper spray for the first scab spray at green tip can also suppress fire blight.

Grapes show no movement. Most growers have completed dormant pruning while some are still finishing up. A dormant application of lime sulfur, sulfur or copper applied directly to the cordon has been shown to reduce inoculum of phomopsis, anthracnose, black rot, powdery mildew and downy mildew. This may be of benefit to growers whose vineyards developed problems with these diseases last year under minimal fungicide application regimes.

Strawberries are greening up, but there is no hint of new leaves. Overwintering mulches should be removed and raked between the rows.

Brambles show no movement. Dormant pruning cutting back last year’s primocanes should be completed soon. Fall bearing raspberries should be cut or mowed to the ground. Lime sulfur treatments for anthracnose should be applied.

The first in-season grape IPM meeting will be on April 24 from 6-8 p.m. at the Berrien County MSU Extension office, 1737 Hillandale Rd., Benton Harbor, MI 49022 (view map). Annemiek Schilder from MSU’s Department of Plant, Soil and Microbial Sciences will cover updates on fungicides and a new grape virus factsheet that will be available this year. We will also discuss soil testing and nutrient applications. Registration is $15 and includes a light supper for those who preregister and prepay by April 22. Two RUP credits are available.