Last week was warm and dry. Last week’s high temperatures were in the lower 80s and lows were in the 50s and 60s. A few light and scattered showers crossed the region over the weekend, but no significant rain fell in the region since no stations received a tenth of an inch of rain. Scattered showers crossed the region Monday morning, Aug. 10, and dropped widely varying rainfall totals. Berrien County received little rain from these showers. Van Buren County and areas to the east received the most rain, with totals generally over a half-inch with some growers reporting over an inch. Top soils are dry. Growers with irrigation are irrigating sandy soils. Evapotranspiration last week was about 0.9 inches. Evapotranspiration this coming week will be less, about 0.2 inches of water a day.

Weather for the upcoming week will start cool with highs around 80. By the weekend it will be warmer with highs in the upper 80s and a chance of rain. There is little chance of rain until the weekend. Last week, our daily growing degree day (GDD) accumulation was about 27 GDD base 42, 24 GDD base 45 and 19 GDD base 50 per day. As we begin to cool off with the passing of summer, we expect less heat accumulations each. We are about a week behind normal in heat accumulation. We are a little behind average in rainfall for the month and the year. See rainfall for the last five years at Southwest Michigan Research and Extension Center (SWMREC).

Now is the time to pull leave samples in tree fruit for tissue sampling. Soil moisture is low in top soil, but reserves are still available in the subsoil. Foliar diseases are common in some orchards. Oriental fruit moth numbers are down. Obliquebanded leafroller adult trap catch is declining, but larvae of second generation can be found webbing leaves and chewing holes in foliage. The Trevor Nichols Research Center (TNRC) trap catches of San Jose scale male adults continue to be high for the third week. San Jose crawlers are expected about 500 GDD51 from the July 20 biofix, estimated to be approximately Aug. 13. Sprays for crawlers are timed approximately 150 GDD51 later, or approximately Aug. 20. Deer feeding continues in young plantings with new growth as fawns become old enough to browse on their own. Crows are a major problem in peaches and apples with red-colored fruit.

Peach harvest continues with Red Haven and other varieties. Fruit quality is excellent. Modest summer pruning one to two weeks before harvest will help poorly coloring varieties to improve their blush.

Oriental fruit moth trap catches have fallen in most orchards. Other pests attacking peach fruit include tarnished plant bugs and the common stink bug, which causes pinhole punctures on fruit. Spotted wing Drosophila (SWD) are a potential problem in peaches picked on the mature side of ripe trees. Infested harvested fruit may be stored at 35 degrees Fahrenheit or lower for at least 96 hours to kill developing eggs, larvae, pupae and adults. Lesser peachtree borer moths are still flying in area orchards and have the potential for egglaying in limb and trunk wounds.

Cherry growers need to maintain protectant fungicide coverage to reduce cherry leaf spot. Some orchards have been defoliated. Most growers applied chlorothalonil after harvest to protect their remaining leaves. Tart cherry growers using copper should avoid copper building up on leaves and discontinue copper use when there is little or no rain between sprays.

Japanese plum harvest of Ozark Premier and Vanette is underway. Many direct fruit pests such as apple maggot, oriental fruit moth, codling moth and obliquebanded leafroller can infest plum fruit. SWD are also a potential problem for thin-skinned plums. Bacterial spot and brown rot are the primary disease problems for plum fruit. Pitting and gumming of fruit is generally due to bacterial spot, which is a particular problem on Castleton, Stanley and Vision European plum varieties.

Apples are sizing well. Paula Red and Gingergold harvest should begin next week. View a more detailed list of apple variety harvest dates for west central and southwest Michigan. Apple maggot adults continue being caught at the TNRC. Apple maggot adults emerge after a rain and fly about for about a week. Trapping with yellow sticky boards is a good method to determine if this pest is present.

Fire blight spread is slowing as terminal growth stops. The fungal disease bitter rot can be found on apple fruit. Growers need to include fungicides in some of their cover sprays to control sooty blotch and flyspeck. Growers should reapply fungicides for these two diseases whenever the hours of leaf wetness exceed 250 since the last fungicide application. Growers with a light crop or with bitter pit-susceptible varieties should include calcium in their cover sprays to reduce bitter pit.

Trap catch of codling moth is up and we are at the peak of second generation flight. Oriental fruit moth trap catches are low in most orchards. Growers should be scouting for obliquebanded leafroller larvae. Green aphids are increasing on active shoot growth.

Pear crop potential is good. Clapp Favorite harvest is about a week away.

Japanese beetle numbers are declining. SWD is common in southwest Michigan. Almost all traps are catching flies and trap numbers are doubling each week. SWD is a pest of ripening fruit and numbers increase as wild berries ripen.

Grapes are at or approaching veraison. The third generation egglaying of grape berry moth is occurring now; the predicted start of egglaying was Aug. 8 in Berrien County and Aug. 9 or 10 in Van Buren County. Grape berry moth pressure is expected to be low in most areas this generation.

Grape berries are resistant to new fungal disease infections at this time. Downy mildew on leaves of susceptible varieties is a concern. We are getting dew almost every morning and downy mildew can really move quickly under these wet conditions. Growers need to protect leaves of susceptible varieties. Wine grape growers should apply a Botrytis fungicide at veraison to reduce late-season fruit rots. In wine grapes, recent hot, sunny weather has caused sun scald to occur where growers have recently performed shoot positioning or leaf removal.

Potato leafhoppers and grape leafhoppers have been scarce. Japanese beetle numbers are declining. 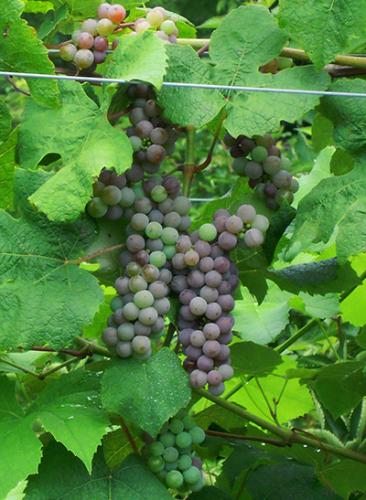 The table grape variety ‘Venessa.’ The loss of green color in grape berries marks the beginning of the ripening process.

Blueberry harvest has passed its peak in southwest Michigan. ‘Jersey’ harvest is winding down with some fields only getting one picking. Fruit quality and size was disappointing. Other fields look better and will be harvested several times. ‘Elliott’ harvest is well underway with good volume and good quality berries.

SWD numbers are generally low in sprayed fields, but SWD numbers in fencerows vary widely depending on which wild fruits are ripe and their abundance. Growers will need to reapply protectant materials for SWD after Monday’s rains where harvest will continue in the field. Frequent picking reduces the amount of time fruit is available to SWD. Growers should be testing fruit for larvae. Growers should apply fungicides to protect fruit from anthracnose and alternaria fruit rots and new shoots from stem blights such as phomopsis.

Soil conditions have been dry and irrigation systems have been running. The potential evapotranspiration last week was less than an inch of water for the week. Evapotranspiration this coming week will be about the same, less than 0.2 inches of water per day. Monday’s showers were very spotty and some growers received significant rain (over an inch) and others received very little. See “Irrigating Michigan blueberries” from Michigan State University Extension for more information. Now is the time to pull leave samples in blueberries for tissue sampling. Growers who have finished harvest are applying broad spectrum contact fungicides to protect leaves for the rest of the season. There is new shoot growth in many fields where soil moisture is good. Fruit buds are starting to form in some fields.

Strawberry fields have leafed after renovation. Growth is good in irrigated and unirrigated fields. Be sure to protect newly emerging leaves against potato leafhoppers and foliar diseases.

Raspberry harvest has ended in summer red raspberries. SWD and Japanese beetles are out and can be a problem in raspberries. Primocane bloom continues on fall bearing red raspberries and primocane bearing blackberries. A little fruit is being harvested, but more is expected in the next few weeks. Growers with ripening fruit need to time their SWD controls with harvest and pay close attention to the pre-harvest intervals (PHI) on the pesticide label. Raspberries and blackberries are very attractive to SWD and growers need to pay close attention to this pest.