Peach harvest is in full swing and early apple harvest has begun.

Last week was warm with high temperatures in the lower 80s and low temperatures in the 50s and 60s. Scattered showers crossed the region Friday night, Aug. 14, and dropped over 0.5 inches of rain in most areas, but a few areas received less than one- tenth. The weekend was hot and humid and soils were dry. Growers with irrigation were irrigating. Scattered thunderstorms and showers moved through the region from the Southwest Monday, Aug. 17, and again dropped scattered rain. Rainfall totals for the week averaged about an inch. Some growers received only one-fifth of an inch while others received over 2 inches. So far in August, most growers have received about 2 inches of rain. Some have received just over an inch and others over 4 inches. With the decreasing day length and moderating temperatures, evapotranspiration last week was about 0.9 inches. Evapotranspiration this coming week will be just over an inch with 0.15 to 0.17 inches of water a day.

Weather for next few days will be unsettled with a good chance of thunderstorms. The week will be warm and wet with highs around 80 and a good chance of rain for the beginning of the week. Last week, our daily GDD accumulation was about 30 GDD base 42, 27 GDD base 45 and 22 GDD base 50 per day. We are over a week behind normal in heat accumulation and some growers are complaining fruit is not ripening.

Oriental fruit moth larvae from current generation are various sizes and up to 0.5 inches in length. Obliquebanded leafroller adult trap catch is declining, but larvae of the second generation can still be found webbing leaves and chewing holes in foliage. These larvae can be a threat until they reach the third instar in late August to early September. San Jose scale crawlers are expected approximately 500 GDD51 from the July 20 biofix based on the Trevor Nichols Research Center traps. Sprays to control crawlers are timed approximately 150 GDD51 later. This is still estimated to be approximately Thursday, Aug. 20 for the southwest region.

Growers and scouts should check orchards close to woods, creeks, ravines and soybean fields for brown marmorated stink bugs (BMSB) as juveniles will be mature enough to move from their hatch sites. Adult BMSB developing from these juveniles increase their feeding in late August and September, preparing for overwintering. 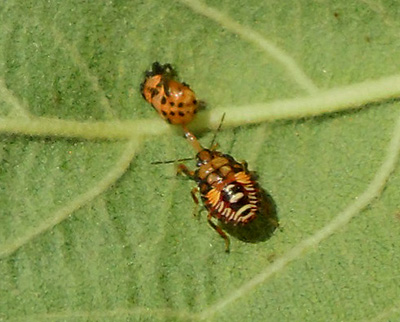 The spined soldier bug nymph at the bottom is feeding on the lady bird beetle pupa above. The long, thin proboscis is clearly visible.

Peach midseason varieties being harvested include Allstar, Loring, Coralstar, Catherina, PF 17, PF19A-007 and Sweetstar. Sunny days and cool nights are helping peaches develop excellent sweetness. Estimated peach harvest dates are available on MSU Enviro-weather. Modest summer pruning one to two weeks before harvest will help poorly coloring varieties to improve their blush. Brown rot continues to be a problem on ripening fruit with rain and warm weather, especially on fruit damaged by insects or with split pits. Growers should rotate fungicide types and modes of action to avoid fungicide resistance problems. Recent dry weather has slowed new bacterial spot infections, with infected leaves yellowing and dropping. Peach scab is showing up in stem bowls and elsewhere on fruit where fungicide coverage has been scanty.

Oriental fruit moth trap catches continue to be high in some orchards, but is generally declining. Spotted wing drosophila (SWD) is a potential problem in peaches picked on the mature side of tree ripe. Infested harvested fruit may be stored at 35 degrees Fahrenheit or lower for at least 96 hours to kill developing eggs, larvae, pupae and adults. Peachtree borer moths are still flying in area orchards and have the potential for egglaying in limb and trunk wounds.

Sweet cherry growers need to maintain protectant fungicide coverage to reduce cherry leaf spot. Modest pruning can be done after harvest on trees that have filled their space.

Japanese plum harvest Simka is underway. Growers are waiting for Toka to ripen. In European plums, harvest of Castleton, NY6 and Vanette is or will shortly be underway. Apple maggots, oriental fruit moths, codling moths and obliquebanded leafrollers can infest fruit if it is not protected. SWD is also a potential problem for plums picked when the tree is ripe. Young plum trees should be examined for potato leafhoppers, an insect that can build quickly and stunt growth. Brown rot is the primary disease problem for plum fruit requiring control now. Pitting and gumming of fruit is generally due to earlier infections of bacterial spot and cannot be controlled at this time in the season.

Apple harvest of Zestar has begun in some sites with Paula Red expected to start this week. Some sunscald symptoms can be seen on exposed apple fruit. A more detailed list of apple variety harvest dates for west central and southwest regions is available. Apple maggot adults continue to be caught in good numbers for the third week at the Trevor Nichols Research Center. Fire blight spread is slowing as orchards cease active terminal growth. Growers need to include fungicides in some of their cover sprays to control sooty blotch and flyspeck. Growers should reapply fungicides for these two diseases whenever the hours of leaf wetness exceed 250 since the last fungicide application. Growers with a light crop or with bitter pit susceptible varieties should include calcium in their cover sprays to reduce bitter pit.

We are still catching good numbers codling moth adults of the second generation flight. Oriental fruit moth trap catches are high in some orchards. Growers should be scouting for obliquebanded leafroller larvae. Green aphids are common and increasing on active shoot growth in some orchard. Sprays for San Jose scale crawlers should go on later this week. 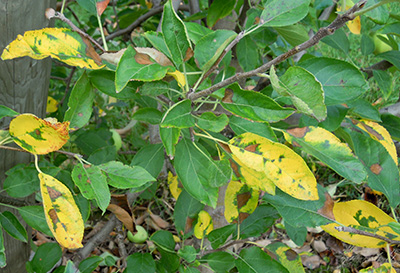 Necrotic leaf blotch appears in Golden Delicious and other apple varieties with Golden Delicious as a parent, such as Gala. Affected leaves have yellow, green and dead blotches and fall from the tree. These symptoms usually occur following a rain, which ends a dry period.

Japanese beetle numbers are declining. SWD is common in southwest Michigan. We are getting calls from small growers in other regions and states with soft fruit who do not know what SWD is. Soft fruit or quickly ripen fruit is an excellent indicator you have SWD. Our traps are catching flies and trap numbers rise and fall depending on the availability of fruit, especially wild berries near commercial fruit plantings. SWD is a pest of ripening fruit and numbers increase as wild berries ripen and the fly moves from one ripening host to another. It has multiple generations every year so the population increases through the growing season.

Grape veraison is just beginning in Concord grapes, especially where there is more light exposure. Early coloring varieties such as Marquette and Geneva Red have already undergone veraison. The third generation of grape berry moth continues; this generation began laying eggs about 10 days ago. See “Grape berry moth pressure lower in 2015 – control window approaching for southern Michigan” by Michigan State University Extension for more information. Both juice and wine grape berries are resistant to fungal disease infections at this time. We are getting dew almost every morning, so this is the time when downy mildew can really move quickly in a vineyard. Growers need to protect leaves of susceptible varieties. Wine grape growers should apply a botrytis fungicide at veraison to reduce late-season fruit rots.

In wine grapes, scout for potato leafhoppers. Grape leafhoppers is scarce in juice grapes. Japanese beetles are feeding on leaves in some vineyards. Usually, only severe outbreaks of these insects require treatment, and pressure has been very light this year in most areas

Blueberry harvest has passed its peak in southwest Michigan. ‘Elliott’ continues with good volumes and good quality berries. SWD numbers are generally low in sprayed fields, but SWD numbers in fence rows vary widely depending on which wild fruits are ripe and their abundance. Growers will need to reapply protectant materials for SWD after rains where harvest will continue in the field. Frequent picking reduces the amount of time the fruit is availble to SWD. Growers should be testing fruit for SWD larvae applying fungicides to protect fruit from anthracnose and alternaria fruit rots and new shoots from stem blights such as phomopsis. Growers who have finished for the season are applying long-last materials such as chlorothalonil.

Soil conditions have been dry and irrigation systems have been running. The potential evapotranspiration at his time is over an inch of water for the week. Evapotranspiration this coming week will be about the same, less than 0.2 inches of water per day. This week’s showers may be spotty with some growers receiving very little rain. See “Irrigating Michigan blueberries” for more information. There is new shoot growth in fields where soil moisture is good. Fruit buds are starting to form in some early varieties.

Strawberry fields generally look good in irrigated and unirrigated fields. Be sure to protect newly emerging leaves against potato leafhoppers and foliar diseases.

Raspberry harvest has ended in summer red raspberries. SWD and Japanese beetles are out and can be a problem in raspberries. Fruit on fall bearing red raspberries and primocane bearing blackberries appears to be ripening slowly. A little fruit is being harvested, but more is expected in the next few weeks. Growers with ripening fruit need to time their SWD controls with harvest and pay close attention to the pre-harvest intervals (PHI) on the pesticide label. Raspberries and blackberries are very attractive to SWD and growers need to pay close attention to this pest. See the SWD recommendations for caneberries at the MSU Spotted Wing Drosophila website.