Veraison is starting in grapes. Many late-season pests are flying. Blueberry, peach and plum harvest continues.

Last week was warm. High temperatures fell from the upper 80s to near 90 degrees Fahrenheit. The overnight lows were near 60 F. Rain events moved through the region on Thursday and Saturday. Soils are moist. Most areas received more than 2 inches of rain for the week. Rainfall totals for the season vary from 9 to 20 inches with most Michigan State University Enviro-weather stations averaging over 13 inches of rain since April 1. Evapotranspiration (ET) rates have been lower, falling from 0.2 to 0.1 inch of water a day. This week, ET rates will be 0.2 or more per day.

Our daily heat accumulations were down last week due to the cooler temperatures. Growing degree-day (GDD) accumulations are 28 GDD base 42, 26 GDD base 45 and 22 GDD base 50. The upcoming week will become hot. High temperatures will rise to near 90 F. There is a good chance of thunderstorms Tuesday night, Aug. 2. Unsettled hot, humid conditions with a chance of thunderstorms continue through the end of the week.

Peach harvest is ongoing with PF Lucky 13 and PF14NJ, and Redhaven, Starfire and Newhaven to start later this week in central Berrien County (see “2016 Michigan peach harvest date prediction"). Oriental fruit moth trap catches continue for the second generation flight. Oriental fruit moth larvae are becoming easier to find in peach fruit in some orchards. Some control problems may be due to using pyrethroid insecticides that tend to break down more quickly during hot weather. Peach scab, a fungal disease, can build up on fruit with a minimum spray program. Brown rot control programs should rotate among the different classes of fungicides to stave off resistance problems. Save the most effective fungicides for when ripening fruit are coloring and most susceptible to infection. Bird pecks in the fruit serve as easy infection points for brown rot.

Plum harvest of Shiro, Vibrant and Santa Rosa is underway in central Berrien County orchards. Pre-harvest drop is occurring for some varieties, especially in orchards with heavy crop loads. Step up brown rot spray programs as fruit start to color and ripen. Fruit left on the tree until soft are more susceptible to SWD infestation.

Apple estimated harvest dates are available from MSU Enviro-weather for weather stations across Michigan. In central Berrien County, estimated dates are Aug. 30 for McIntosh, Sept. 16 for Jonathan and Sept. 22 for Red Delicious. Harvest is about five to 10 days later in Allegan County. Retain applications are targeted for 30 days before expected harvest. The time for Retain application is quickly approaching. Light colored varieties such as Honeycrisp on dwarf rootstock are exposed to direct sunlight and are prone to sunburn damage. Growers can reduce sunburn by applying materials such as Surround or Raynox.

Fruit entry stings from codling moth or oriental fruit moth have been found in several area orchards. Codling moth flight is continuing in some orchards with no apparent dip between the first and second generations. Obliquebanded leafroller trap catch numbers continue to be low, but the second generation flight is probably starting. Apple maggot numbers continue to climb for the Trevor Nichols Research Center trapline. Apple maggot flies emerge from the soil after summer rains. Heavy rains the last two weeks mean there is a large emergence of this pest. Growers with a history of this insect problem should be sure they are covered (see “Managing apple maggots with insecticides”).

Sooty blotch and flyspeck disease symptoms should be appearing soon. A general rule of thumb is reapplying fungicides for these diseases after an additional 220 hours of leaf wetness, or 2 inches of rain, has occurred following application.

Pear fruit range from 2 to 2.25 inches in diameter. Fabraea leaf spot symptoms are common on leaves and fruit of some varieties. Fungicides applied for pear scab in June and July will generally control this disease. Some orchards have sticky leaves due to pear psylla honeydew.

Spotted wing drosophila (SWD) numbers are high in southwest Michigan (see “Michigan spotted wing Drosophila report for July 29, 2016"). We are catching SWD in many traps. We normally see a surge in SWD numbers in August as SWD come off ripening wild fruit such as black raspberries and blackberries. Growers with ripe fruit should be protecting against this pest now. Japanese beetles are generally scarce.

A few grape leafhoppers and potato leafhoppers can be found in area vineyards. Growers will be scouting for these pests now. Japanese beetles have emerged and are feeding in hotspots. Dates for full bloom in wild grapes were May 28 for Berrien County and May 30 for Van Buren County. The control window for third generation flight of grape berry moth started last weekend and growers are spraying to control eggs and larvae. Unfortunately, there will likely be a fourth generation of berry moth this year. See “Southwest Michigan grape scouting report – July 26, 2016” for more information. 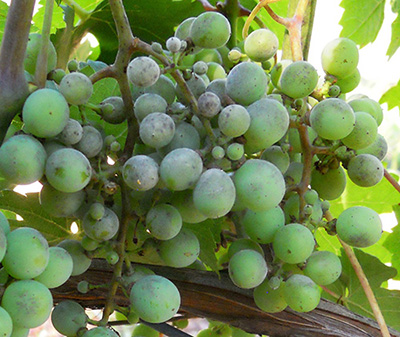 Powdery mildew on grape berries. The grape berries are becoming resistant to fruit infection, but the leaves and canes are still susceptible to infection.

Blueberry harvest continues. Fruit quality and size has been good. Growers are harvesting Jersey and other mid-season varieties. Machine harvest of Bluecrop continues. Growers have finished harvesting most early-season varieties. SWD numbers are increasing across the region and growers need to protect their fruit as it ripens and through harvest. We are seeing the typical surge in SWD numbers in August (see “Michigan spotted wing Drosophila report for July 29, 2016”). Several generations of flies have reproduced in wild fruits and are looking for new hosts. See the current recommendation for SWD control in blueberries. Growers should rotate their spray materials to different chemical classes to avoid problems from the overuse of one type of insecticide. Blueberry maggots are easy to find in unsprayed fields (see “Blueberry maggot emergence sharply up after rains”). Blueberry maggots should not be a problem in fields sprayed regularly for SWD.

Anthracnose is the most common fruit rot found in harvested fruit. Systemic fungicides applied before irrigations can effectively prevent fruit rot. Fungicides applied after infections are not as effective in controlling this disease in ripening fruit. Use the Anthracnose model on Enviro-weather for more on controlling this disease. Growers need to maintain good soil moisture and irrigate to maintain good fruit growth.

Bramble harvest is ending for summer red raspberries. Blackberry harvest is underway. Growers should be irrigating. Raspberries and blackberries are shallow-rooted and suffer under dry conditions. Ripening fruit is very attractive to SWD. Growers should have traps on their farms. Some growers are picking every two days to avoid SWD. For more information, see the current recommendations for SWD control in raspberries and blackberries. 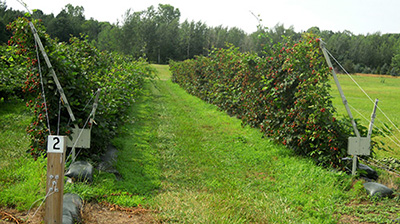 Blackberries growing on a swing trellis system where the floricanes and the primocanes are kept separate and the orientation of the floricanes is changed after bloom. 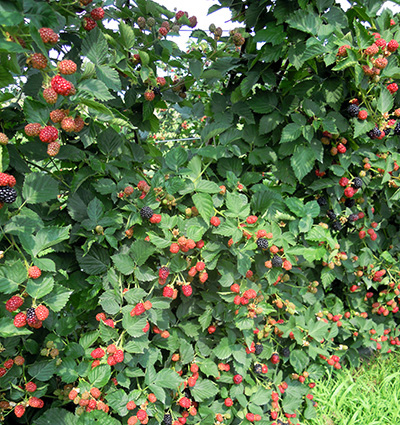 This fruiting wall of blackberry fruit is produced on one side of the swing trellis.

The Peach and Plum Variety Showcase will be Aug. 23 at 4 p.m. at the Southwest Michigan Research and Extension Center, 1791 Hillandale Rd, Benton Harbor, MI 49022. Growers can see, discuss and sample stone fruit from MSU variety trials, commercial growers, nurseries and university breeding programs across Michigan and elsewhere. Fruit include yellow and white fleshed peaches, nectarines, donut, aprium and plumcot types. There is no charge for this meeting. Supper will be provided courtesy of International Plant Management and Summit Sales of Lawrence, Michigan.