High temperatures last week were near 80 degrees Fahrenheit with lows generally in the 50s. Storms moved across the region Monday and Tuesday, July 7-8. Rainfall totals were 1-2 inches. Water is standing in many fields. Rainfall continues to exceed evapotranspiration (ET) in many areas, but some areas report much less rain and dry soils. Soil temperature is about 70.

This coming week should start cool with lake effect showers with high temperatures below 70 and then with highs rising into the 80s by the weekend. There is a chance for showers most of the week. Last week we picked up about 192 growing degree days (GDD) base 42, about 27 per day, and 135 GDD base 50, about 19 a day. In GDDs, we seem to be over a week behind our long-term average.

Frequent rains are making it difficult to maintain spray coverage against insects and diseases. There have been no reports of brown marmorated stink bugs in local fields and orchards. The Trevor Nichols Research Station first generation biofix for codling moth was May 26, with the start of the next generation flight predicted to begin 1,060 GDD base 50 F later, or approximately the week of July 20.

Apricots are 1.5 inches and larger in diameter, with harvest of early varieties starting this week in Berrien County.

Peach fruit ripening has slowed with frequent rains and cooler temperatures. Early varieties expected to start this week include PF1, Early Star, PF-5D Big and Desiree. Brown rot is showing up on fruit with split pits and insect damage. Stink bugs can be found feeding on fruit, causing small holes with gummy droplets. We have seen an increase in oriental fruit moth trap catches since late June, with the start of the second generation flight. Bacterial spot symptoms continue to increase on leaves and fruit of susceptible varieties, with some leaf drop.

Sweet cherry harvest has ended. Mature sweet cherry trees that have filled their space can be trimmed modestly after harvest to early August window with less risk of bacterial canker than the traditional delayed dormant pruning time. Pruning in the post-harvest window is less invigorating than spring pruning.

Tart cherry harvest in southwest Michigan is essentially done. Wind-whip damage to fruit causing bruised skin and brown flesh was a significant problem in southwest tart cherry orchards. Recent rains have contributed to cherry leaf spot becoming more apparent in area orchards. In other orchards, the yellow leaves were cause by bacterial canker. Growers should continue to apply sprays to control cherry leaf spot. Chlorothalonil (Bravo, Chloronil) can be used post-harvest with a maximum of 15.4 pounds per active ingredient per acre per year. 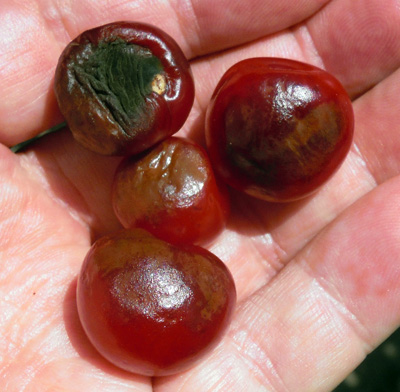 Tart cherry fruit affected by wind-whip. Note the brown discoloration of the fruit. This fruit is predisposed to infections such as the Alternaria in the upper left. Photo credit: Mark Longstroth, MSU Extension

Japanese plums are 1-1.25 inches in diameter and European plums are 0.875-1 inch. Cracking and gumming of fruit and some leaf and fruit drop due to bacterial spot and hail is occurring in Japanese plums. Obliquebanded leafrollers, codling moths and brown rot can be problems in plums as we head into July.

Apple fruit range from 1.75-2 inches in diameter, with some summer apple varieties at 3 inches. Relatively minor increases in fire blight symptoms have been seen following the severe weather of June 30. The frequent rains have been conducive to sooty blotch and flyspeck disease infections. Codling moth larvae from the first generation have been found in apple fruit. Spotted tentiform leafminer leaf mines are hard to find. Obliquebanded leafroller trap catch has declined as the first generation flight comes to an end. Larvae from this generation generally targets leaves.

Apple maggot adults continue to be trapped in low numbers, starting on June 30 at the Trevor Nichols Research Station near Fennville, Michigan. Sandy sites with early summer varieties tend to be most prone to apple maggot problems. Unsprayed apples and crabapples have been losing their leaves to apple scab for the last few weeks. 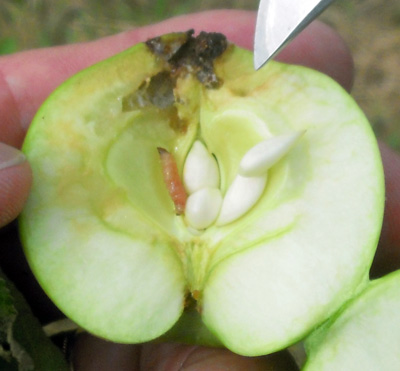 Pear fruit are 1.5 inches or more in diameter. Fire blight strikes are generally rare. Growers continue to tear out watersprouts as a way to remove protective habitats for pear psylla. The next generation of codling moths and obliquebanded leafrollers will target developing fruit.

Raspberries and blueberries are harvesting. Japanese beetles and spotted wing drosophila (SWD) are the pests of major concern. Wet weather is good for disease development.

Grape berries are sizing rapidly. Concord grape berries will be at half their final weight soon as most areas passed 1,200 GDD base 50 after April 1 over the weekend.

Southwest Michigan GDD summary for grapes from April 1 to July 13, 2014 via MSU Enviro-weather

Grape growers are applying sprays to control black rot, phomopsis, powdery mildew and downy mildew and grape berry moths. Michigan State University Extension recommends growers to use 50 percent of wild grape bloom as biofix to time treatments to control grape berry moth. Approximately 50 percent wild grape bloom was May 29 in Berrien County and June 2 in Van Buren County. According to the MSU Enviro-weather grape berry moth model, 810 GDD base 47 are required for the pest to complete its lifecycle and begin egglaying. Egglaying for the second generation began this last week. A wide variety of materials are available to control grape berry moth, see the Michigan Grape Management Guide (E-154) for a list of recommendations.

Blueberry harvest of Duke and other early varieties is well underway and some growers have begun to pick Bluecrop. Fruit size is generally large. Frequent rains have complicated harvest. The crop is looking better as the fruit has sized and the fruit is much more noticeable. There is a large amount of fruit on canes with few leaves and it will be interesting to see how this fruit sizes in comparison with the early large fruit we are harvesting now.

SWD numbers have been generally low, but many growers have already applied sprays to control this pest. Growers only need to protect fruit that has begun to ripen.

Strawberry renovation is underway. Renovation is a crucial time for weed control in strawberries. Michigan State University Extension has recommendations for herbicide choices at renovation.

In brambles, harvest of black raspberries (black caps) and red raspberries continues. Japanese beetles are out. SWD have been detected in southwest Michigan. Raspberries seem to be the favorite fruit for SWD and growers should be trapping to determine if controls are needed. MSU Extension has posted SWD recommendations for raspberry growers. More information is available on the MSU Spotted Wing Drosophila website.