Last week temperatures were a rollercoaster. High temperatures started in the 80s, fell into the 60s, rose to 90 degrees Fahrenheit and then returned to 80 F. Overnight lows followed the same pattern. Some growers reporting lows in the mid-30s during mid-week. Scattered showers missed most areas and soils are drying out quickly. Growers should be irrigating. The cooler temperatures mid-week lowered last week’s GDD totals. We picked up 20 GDD base 42, 19 GDD base 45, and 15 GDD base 50. We can expect Growing degree-day (GDD) accumulations to be a little higher this week with more normal temperatures. High temperatures generally will be in the 80s with lows in the 60s. There is a good chance of showers or thunderstorms for most of the week. Rain totals of .5 to more than 1 inch of rain are expected. Some storms may be strong, with high winds and hail. Long term, we can expect warmer temperatures for the rest of the month.

Insects were active last week with the warm temperatures. Trap catch numbers for codling moth and Oriental fruit moth are down indicating the end of the first flight of these pests. Oblique banded leafroller catch began a week ago and this week’s numbers are high. San Jose scale crawlers should be out. Crawlers are expected approximately June 14, based on the Trevor Nichols Research Station biofix of May 30. Trevor Nichols is catching both lesser peach tree borer (May 30) and greater peach tree borer (June 6) and their numbers are increasing.

Apricot fruit are about two inches in diameter, and final swell has begun. Harvest is a few weeks away.

Peaches are up to 1.7 inches in diameter and are large enough to start hand thinning. Pit hardening is expected soon. The crop looks good. The predicted harvest dates for Redhaven in Southwest Michigan range from July 29 to August 2. Estimated harvest dates for some peach varieties are available on the Enviroweather site in the fruit tools. Oriental fruit moth numbers are down in many sites indicating the end of the first generation flight. Oriental fruit moth, biofix was set as Monday, April 25. The Enviroweather Oriental fruit moth model predicted egg hatch beginning the week of May 22, (200 DD45 following the biofix). Flagging of terminal growth by Oriental fruit moth larvae was detected last week. Rains will favor bacterial spot infection of young leaves and peach fruit. Bacterial spot symptoms are appearing on leaves of susceptible varieties. Peach varieties prone to rusty spot should be protected until pit hardening. It is too late to treat peach leaf curl, infected leaves will fall off. Peach fruit with wart-like symptoms of unknown causes are being reported. Similar symptoms have been seen occasionally in previous seasons. Older literature calls it a physiological disorder. 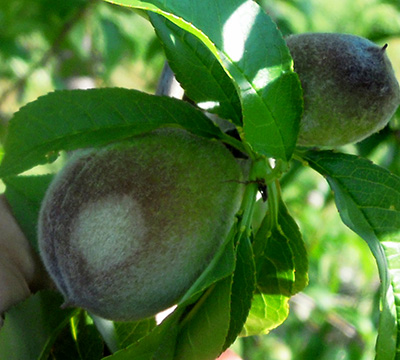 The initial symptoms of rusty spot are a pale spot on the peach. Photo: Mark Longstroth, MSU Extension.

Sweet cherries are coloring. For early ripening varieties harvest should begin next week. Birds are attacking the fruit. Sweet cherries are especially susceptible to brown rot as they ripen. Growers need to protect the fruit during this week’s rains. Growers should use materials that protect against both cherry leaf spot and brown rot.

Tart cherries are coloring. Leaves continue to be vulnerable to leaf spot. Growers continue to apply protectant fungicides for cherry leaf spot. Some leaf yellowing has been observed but this was generally leaf symptoms of bacterial canker with large holes or black spots on the leaves. Some bacterial fruit symptoms were seen as well.

Plums should be protected against black knot from first bloom until second cover. This is the period of active shoot growth. Older black knot growths are actively expanding. Japanese plums are up one inch in diameter. Bacterial spot symptoms can be found on more susceptible varieties. Some varieties are heavily set with fruit and growers are hand thinning. European plums are 20 millimeters in diameter.

Apple fruit sizes vary from 18 to 25 millimeters in diameter. The crop is variable. Frost rings have between reported in some orchards. Frost rings result from injury to the skin of the fruit from cold during or shortly after bloom. Fire blight shoot blight symptoms are generally scarce. Fire blight seems to be only in orchards with a history of the disease. Apple scab ascospores numbers are near zero indicating the end of primary scab. The Enviroweather apple scab model indicates that all apple scab spores have matured. Young leaves are still susceptible to infection from scab lesions on the leaves. Leaf and fruit primary scab lesions are easy to find on unsprayed trees and infected leaves are turning yellow and falling off the tree. Growers need to scout their orchards for scab lesions to determine if they need to continue their scab program. Codling moths were biofixed on May 23. Trap catch numbers are declining and we are at peak egg hatch. Growers should use insecticides aimed at larvae. We are catching Oblique banded leafroller adults and the regional biofix was set as June 6. It appears that Oblique banded leafroller has recovered from a population collapse during the extreme drought of 2012 (See: 2012 Insect activity and its effects on 2013 fruit management programs – Part II). Grower should be aware of the need to control this pest in 2016. (See: Summer Leafroller Control). Oblique banded leafroller egg laying begins about 400 GDD base 42 after biofix. Relatively dry conditions have slowed the appearance of sooty blotch and flyspeck symptoms which requires about 220 hours of leaf wetness following petal fall. 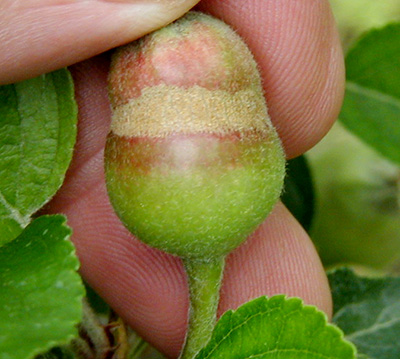 A well-developed frost ring circles this apple. The injury was caused by near freezing temperatures around bloom time. Photo: Mark Longstroth, MSU Extension.

Pears fruit are 15 to 25 millimeters in diameter. Removing succulent water sprouts from the inside of the tree will help to reduce sites for pear psylla population growth. Pear scab symptoms can be found on the leaves and fruit of unsprayed trees.

A few spotted wing drosophila (SWD) are being trapped in Southwest Michigan. This was probably the overwintering generation. These flies will be looking for ripe berries to begin egg laying.

Grape bloom continues. In juice grapes and some hybrid wine grapes bloom is ending. Vinifera grapes are also blooming. Bloom and the two to four week post-bloom period are the most important time to control black rot, powdery mildew, downy mildew, and phomopsis. Many growers applied protectant fungicides and insecticides for rose chafer, just before bloom began. Grape berry moth flight is heavy, but winding down until second generation. Dates for full bloom in wild grape were May 28 for Berrien County and May 30 for Van Buren County. Growers should use these dates with the Grape berry moth Enviroweather model to determine the treatment date for second-generation grape berry moth. Growers planning on applying spirotetramat for control of grape tumid gallmaker or grape mealybug can apply it now.

Blueberry fruit are developing fast. Many fields have a heavy fruit set. Shoot growth has stopped and the bushes energy is focused on fruit growth. Growers are complaining that some canes have a heavy set of fruit and only a few small shoots with leaves. Duke, Draper, Bluecrop and Elliott are the varieties most often mentioned. It appears these canes either lost leaf buds in the winter or in an early spring freeze. These canes could still be suffering damage from the two brutal winters of 2014 and 2015. In the green fruit stage, growers should use fungicides to reduce anthracnose and phomopsis. There is an Anthracnose model in the fruit section of the Enviroweather website. Because of the lack of rain risk has been low. We are still catching fruitworm adults but both cherry fruit worm and cranberry fruit worm trap catches are declining. A second insecticide application is recommended in problem sites about 400 GDD base 50 after the first application. Soils are very dry and growers with irrigation should be irrigating to maintain fruit growth. Blueberries have a shallow root system and like moist soils, not too wet or too dry. Growers need to pay close attention to soil moisture. Water is especially important when the berries are growing rapidly. Slight water deficits which reduce early fruit growth cannot be made up later. 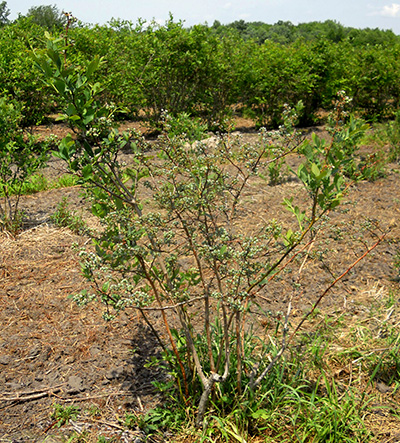 Canes on the Elliott blueberry bush have good growth of new shoots, but the rest of the canes have only a few leaves to support all the fruit. Photo: Mark Longstroth, MSU Extension.

Strawberry harvest lagged mid-week when cooler weather slowed fruit ripening. Harvest should continue this week and taper off after this weekend as fruit becomes small. Fruit from the later blooms does not have the same size potential as the first berries. Many growers will try to stay open through the weekend. Fruit rots and damage from sap beetles have been common. Newly planted strawberry fields have good growth and growers need to be sure and defruit new plants to increase growth and runnering in new fields. After harvest is complete, growers should renovate fields as quickly as they can. For more information on strawberry renovation see “Time to renovate strawberries” for cultural considerations, and “Strawberry renovation is due soon" for herbicide choices. Growers with extended harvests i.e. day-neutral strawberries should consider treating for SWD.

Bramble harvest should begin in another week in black raspberries (black caps) and early summer red raspberries. Blackberry bloom is continuing. Raspberries and black berries are shallow rooted and benefit from irrigation. There is no need to spray for SWD until the fruit begins to ripen. Raspberry cane borer will soon be attacking primocanes.

Currents are ripening and harvest is underway.