The summer fruit season is off to a great start. Berry and cherry harvests are underway.

Summer-like weather continues in southwest Michigan. Last week’s temperatures were warm with high temperatures in the mid-80s. Overnight lows were generally in the 50s. Storms moved across the area on Wednesday and Sunday mornings, June 22 and June 26. These storms brought much needed rain. Wednesday’s showers, June 22, were widespread and dropped almost 3 inches of rain in some areas. These storms were quite spotty, with some areas receiving less than an inch of rain. Sunday’s storms, June 26, missed most of the southwest Michigan counties. Rain was heavier to the north and south. Rainfall totals for the week varied from one-third to 3 inches. Rainfall totals for the season vary from 7 to 15 inches with most Michigan State University Enviro-weather stations showing about 9 inches of rain since April 1.

Most soils are drying out quickly. Growers should be irrigating. Our daily heat accumulations were similar to last week’s with about 30 growing degree-day (GDD) base 42, 27 GDD base 45 and 21 GDD base 50. The coming week will be cooler. High temperatures will drop into the mid-70s with lows in the 50s. Temperatures will rise with highs in the 80s and lows near 60 degrees Fahrenheit. There is a chance of showers or thunderstorms at the end of the week.

Young orchards in sandy sites are starting to set their terminal buds. Insects were active last week with the warm temperatures. Trap catch numbers for oriental fruit moth are down, indicating the end of the first flight of this pest. Codling moth trap catch numbers are declining but are still significant for some orchards. Obliquebanded leafroller catch began three or four weeks ago. This week’s numbers are down, but still high. San Jose scale crawlers should be past their peak based on the Trevor Nichols Research Center biofix of May 30. These crawlers should be settling down and producing their waxy scale, thus reducing insecticide effectiveness. Trevor Nichols Research Center is catching lesser peach tree borer (May 30) and greater peach tree borer (June 6), and their numbers are increasing. Late June and early July is the time for trunk applications to control borers.

Apricot fruit are over 2 inches in diameter. Fruit is beginning to color. Harvest is a couple of weeks away.

Peaches are up to 2 inches or more in diameter, depending on the crop load and variety. A few early selections are starting to color, with first harvests expected in about one week. The crop looks good. Growers are hand-thinning. Pit hardening has occurred in most southwest area orchards.

Oriental fruit moth numbers are down, indicating the end of the first generation flight. The second generation flight of oriental fruit moth is expected to begin soon. Flagging of terminal growth by oriental fruit moth larvae is common in orchards with weak control programs. Bacterial spot symptoms continue to appear on leaves, and more recently on fruit of susceptible varieties. The wine-red leaf symptoms of X-disease have shown up in local peach orchards. This generally means that X-disease infected sweet, tart or choke cherry trees in the vicinity and need to be removed to help slow disease spread. 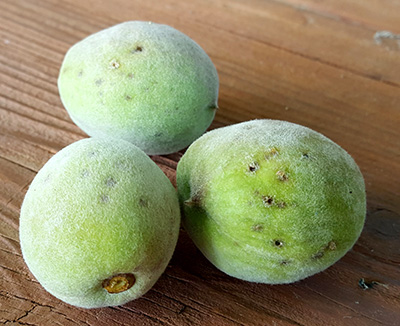 Dimples and holes in these peaches are insect feeding damage. We suspect a plant bug, but don’t know which one. Photo: Mark Longstroth, MSU Extension.

Sweet cherry harvest has started. Birds eating the fruit is a problem. Sweet cherries are especially susceptible to brown rot as they ripen. Growers should protect the fruit during this week’s rains. Growers should use materials that protect against cherry leaf spot and brown rot.

Tart cherries are bright red and harvest is beginning. The crop is variable. Because the fruit is so easy to see in the orchards, the crop looks better. Last week’s storms did not cause much damage. A few trees were blown down where there were strong winds. There was very little wind-whip from these storms. Hail damage was localized to only a few areas. Sprays to control brown rot and dry up the fruit should follow any intense storm in cherries.

Leaves continue to be vulnerable to leaf spot. Growers continue applying protectant fungicides for cherry leaf spot. Cherry fruit flies and spotted wing Drosophila (SWD) have been trapped in low numbers, but catches are expected to climb. Trapping for these two pests in individual orchards is recommended to guide spray decisions. 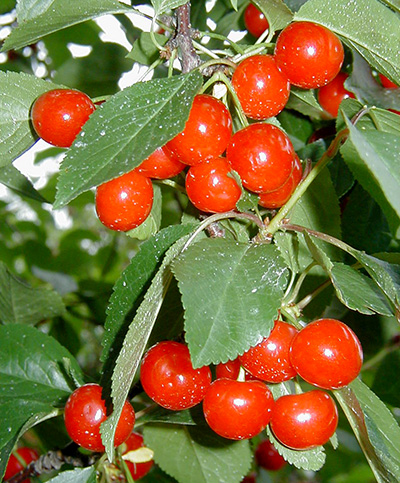 Plums’ vulnerability to new black knot infection is declining as terminal growth stops. Active black knot growths from last year’s infection are actively expanding. Japanese plums are over 1 inch in diameter, depending on the variety. Bacterial spot symptoms can be found on more susceptible varieties. Some varieties are heavily set with fruit and growers are hand-thinning. European plums are 20 millimeters in diameter.

Apple fruit sizes range up to 2 or more inches in diameter. The crop is variable. Fire blight shoot blight symptoms are scarce and the dry weather has limited spread. Symptoms were associated with cankers on older trees. Hail and strong winds two weeks ago caused some trauma blight and symptoms are showing up this week.

Primary apple scab is over. Young leaves are still susceptible to secondary scab infection from scab lesions on this year’s infected leaves. Scab-infected leaves are falling off the tree. At this time the fruit are resistant to infection. Growers should scout their orchards for scab lesions to determine if they need to continue their scab program.

Codling moth trap catch numbers are declining and we are past peak egg hatch. Growers should use insecticides aimed at larvae. We are catching obliquebanded leafroller adults and expect egg hatch of this generation has started. It appears obliquebanded leafroller has recovered from a population collapse during the extreme drought of 2012 (see “Summer leafroller control”). Relatively dry conditions have slowed disease development. Sooty blotch and flyspeck requires about 220 hours of leaf wetness starting 10 days past petal fall to begin infection. We currently have about 166 hours of leaf wetness since petal fall.

Pear fruit are over 1 inch in diameter. Removing succulent water sprouts from the inside of the tree helps to reduce sites for pear psylla population growth. Pear scab symptoms can be found on the leaves and fruit of unsprayed trees. Sticky leaves due to pear psylla honeydew can be found in some orchards.

Japanese beetles are beginning to emerge and numbers should increase after rains in July. A few spotted wing Drosophila (SWD) are being trapped in some traps in southwest Michigan. Wild berries such as bush honeysuckle, mulberries, saskatoons and black raspberries are ripening. Many wild fruit serve as hosts to SWD. Early ripening fruit help to build SWD populations. We will soon see the first surge in SWD numbers as flies emerge from these fruits.

Grapes are at the buckshot berry stage. The two-to four-week, post-bloom period is the most important time to control black rot, powdery mildew, downy mildew and Phomopsis. Dry weather with few infection periods since May has kept disease pressure down. Very little disease has been noted in scouting area vineyards. Phomopsis is the most common disease found in vineyards due to the wet weather during early shoot growth. Due to the dry weather, last month’s black rot, downy mildew and powdery mildew are hard to find.

Second generation flight of grape berry moth is beginning. Dates for full bloom in wild grape were May 28 for Berrien County and May 30 for Van Buren County. We are using these dates with the Enviroweather grape berry moth model to determine the treatment date of 810 GDD base 47 after biofix. Insecticide applications should be timed for June 30 in parts of Berrien County and July 3 in Van Buren County.

Blueberry harvest has started in Berrien County with the first harvests of many early varieties. The earliest varieties are also picking to the north. We are still catching fruitworm moths. Generally, cherry fruitworm and cranberry fruitworm trap catches are low, but surges have been found in some fields. Blueberry maggot have been caught in some fields. Few SWD are being trapped in the region, but this will change. We expect a surge in SWD numbers soon from ripening wild fruit.

Warm rains allow anthracnose fruit rot to become established on green fruit. In the green fruit stage, fungicides work much better than when protecting ripe fruit. Use the Enviro-weather anthracnose model. Shoots collapse from phomopsis stem canker is starting. Growers should be irrigating to maintain fruit growth. Growers should pay close attention to soil moisture. Some growers have complained of small fruit on canes with a heavy fruit set and few leaves.

Strawberry harvest has ended across southwest Michigan. Fruit rots and sap beetles were a problem for many growers. Growers need to renovate their fields to begin setting up a good harvest next year. For more information on strawberry renovation, see the MSU Extension articles “Time to renovate strawberries” for cultural considerations, and “Strawberry renovation is due soon” for herbicide choices. Growers with day-neutral strawberries should consider monitoring for SWD.

Bramble harvest is underway with black raspberries (black caps) and early summer red raspberries being harvested. Soils are dry and growers should be irrigating. Raspberries and black berries are shallow-rooted and benefit from irrigation under dry conditions. The ripening fruit is attractive to SWD. Growers should have traps on their farms. Some growers are picking every two days to avoid SWD. Raspberry cane borer will be attacking primocanes. 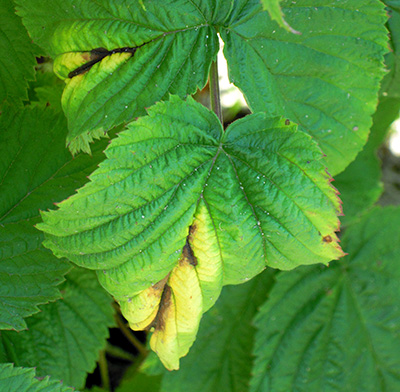 The initial symptoms of spur blight are an infection of the midrib of the leaf that progresses back down the leave into the cane. Photo: Mark Longstroth, MSU Extension.

There are a pair of Blueberry Pre-harvest Meetings in Van Buren and Ottawa counties on Tuesday, June 28, in Van Buren County and Wednesday, June 29, in Ottawa County. Both meetings will be from 6 to 8 p.m. and will be eligible for two RUP credits. The Van Buren County meeting in Breedsville, Michigan, includes an herbicide demonstration plot. There is no fee for either of these meetings and all blueberry growers and consultants are invited to attend.