Last week, high temperatures were in the high 70s to low 80s and low temperatures in the 50s and 60s. Last week was generally dry. Saturday, June 27, brought a major storm across Michigan. Rain moved into the region Saturday and dropped about an inch of rain in the south and to the east. Very little rain fell in the north and near Lake Michigan. There is flooding in low lying areas near rivers. Rainfall totals from these storms ranged from 0.01 to almost an inch. Soils in many areas were beginning to dry out. Rainfall totals since April 1 average just below 12 inches, but rains have been quite variable, with totals ranging from less than 8 inches (Hartford, Michigan) to over 15 inches. Many soils are still wet, especially heavier soils with poor drainage or wet spots in fields.

Weather for the upcoming week will be cooler with high temperatures in the 70s and lows generally below 60. There is little chance of rain this week with a dry, cool pattern in place. We are close to normal in terms of crop development. With the pleasant weather last week, we picked up about 22.4 growing degree days (GDD) base 42, 20 GDD base 45 and 15.6 base 50 per day. We expect similar heat accumulations this week.

Rain accumulation for the area has been quite variable, with totals since early spring ranging from 10 to 15 inches. With all this wet weather, foliar diseases are a problem for all fruit growers. Soil moisture is generally adequate to support good growth. With all the moisture, growth has been very good. Foliar diseases are common given the long wetting periods in May and June. Obliquebanded leafroller egg hatch is underway across the region.

Peach fruit are growing rapidly. Pit hardening occurred last week. Early peaches are starting to color and develop a red blush. The first varieties are expected to start harvest in about a week. Redhaven harvest is predicted for Aug. 3 in central Berrien County. For more information on peach harvest dates, see “Peach harvest dates available on MSU Enviro-weather” by Michigan State University Extension. Fungicide treatments for rusty spot should continue until pit hardening for varieties such as Loring, Bellaire and other peaches with showy bloom that tend to be more susceptible to this disease. Bacterial spot symptoms are slowly building up on leaves of susceptible varieties. Mycoshield (21-day pre-harvest interval) can be used to help keep bacterial spot on foliage from spreading to fruit.

Oriental fruit moth trap catch for first generation flight is declining or zero in many sites. There is some shoot tip flagging and fruit entries by larvae. At this point, tarnished plant bugs and common stink bugs can cause pinhole punctures on fruit, but marmorated stink bugs, the new pest slowly building in the area, can cause significant damage to fruit.

Sweet cherry harvest continues for the second week. There is some fruit cracking due to rain and associated brown rot. Bird feeding problems have decreased as more fruit is ripening in the area. Cherry leaf spot symptoms are easy to find in some orchards and growers need to maintain protectant fungicide coverage before rain events. Warm rains are good infection periods for brown rot and sweet cherries are very susceptible to brown rot as the fruit ripens.

Tart cherry harvest will begin soon. The tart cherry crop looks good and a heavy crop is expected in many orchards in the southwest. With the heavy rains and long wetting periods early in the season, cherry leaf spot is established in many orchards. Cherry leaf spot symptoms, yellowing leaves followed by the loss of these leaves, is appearing in some orchards. Fungicide protection should be maintained throughout the season. See “Controlling cherry leaf spot in orchards with existing symptoms” for more information. Tart cherries are moderately tolerant to copper, but growers need to avoid copper buildup on the leaves and reduce or discontinue copper use if there is no rain between sprays. Use the MSU Enviro-weather cherry leaf spot model to help guide sprays and track infection periods.

Powdery mildew is becoming common in many orchards. Cherry fruit flies have not been trapped at the Trevor Nichols Research Center trapline yet. 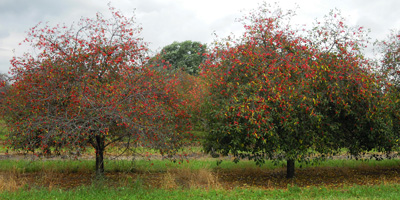 Cherry leaf spot defoliation is a serious problem in many cherry orchards where this disease is well established after a wet May and June. The loss of leaves this early in the season will severely weaken the tree, but not kill it outright.

Japanese plums are an inch or more in diameter, depending on the variety. European plums are up to 1 inch in diameter. Fruit and leaf russet due to chemical phytotoxicity are common, including Captan-induced russet. Plum fruit and leaves are susceptible to bacterial leaf spot, but Mycoshield is not labeled for use on plums. Growers also need to protect the current season’s growth against black knot until shoot growth ceases later in the season.

Apples are sizing well with the largest fruits over 2 inches in diameter for main season varieties. Growers are finishing hand-thinning. We are seeing wilting and discoloration of this year’s growth, which looks like fire blight, but appears to be winter damage at the base of the overwintering buds. Yellow sticky boards should be deployed to monitor for apple maggots, which should emerge soon. Secondary apple scab is common in some orchards and trees are shedding infected leaves. Bright yellow cedar apple rust symptoms are also common in some orchards. Growers need to include fungicides to control sooty blotch and flyspeck and calcium for bitter pit in their cover sprays. We have received 200 to 300 hours of leaf wetness across the region since petal fall and we expect symptoms after 240 to 290 hours of wetness. 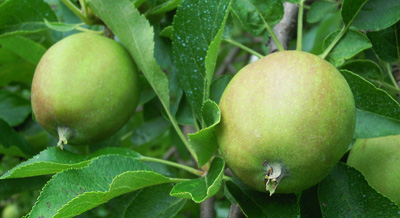 Pear crop potential is good. Bartlett average up to 1.25 inches in diameter and Harrow Sweet are 1 inch in diameter. Growers are removing watersprouts from trees to discourage pear psylla populations. Pear psylla numbers are increasing.

Japanese beetles are out. A few spotted wing Drosophila (SWD) have been trapped in Berrien County. Most traps have not caught any flies, but a few traps have caught one or two flies. SWD is a pest of ripening fruit and numbers should increase as wild berries ripen.

Grape berries are sizing in Concord and Niagara, and are in buckshot berry in hybrid and vinifera wine grapes. Juice grapes are growing out of their susceptibility to fruit infections including powdery mildew, downy mildew, black rot and phomopsis. Vinifera grapes remain vulnerable to cluster infections of all these fungi. Black rot infections are developing on clusters in some vineyards, particularly where good coverage was not achieved during a wet bloom.

In wine grapes, continue scouting for potato leafhoppers, which arrive on storms and winds from the south. Look for grape leafhoppers in juice grapes. Usually only severe outbreaks of these insects require treatment. Japanese beetles have also emerged.

Blueberry fruit are sizing very well. Hand-harvest of early varieties such as Weymouth and Bluetta has begun. We are still at least a week away from the beginning of Bluecrop harvest. Most fields are very wet. We are still catching both cherry fruitworms and cranberry fruitworms. Cranberry fruitworm trap catches were up this week. It is unusual to have such a strong flight this late in the season close to harvest. Scouts are also catching some blueberry maggot flies and a few SWD have been reported as well. Only fruit that is coloring needs to be protected from these pests of ripening fruit.

Cane collapse from phomopsis appears to be slowing down. With the wet spring, growers have had a hard time maintaining fungicide protection. Growers should apply fungicides to protect the fruit from anthracnose and alternaria fruit rots and new shoots from stem blights such as phomopsis. There have been reports of alternaria fruit rot on ripe fruit. Powdery mildew is appearing, especially on the shoots from the base of the bush. Blueberry maggot flies were caught in sticky traps in Berrien County.

Strawberry harvest has ended for most growers. Some opened for a few days as the fields and fruit dried out. Strawberry renovation should be done as quickly as possible after the end of harvest. In the June bearing matted row system, renovation starts after harvest. The rows are narrowed using tillage or herbicide sprays. Often the field is mowed and 2,4-D applied to kill broad leaf weeds. Longer acting soil residual sprays are applied to control more weeds in strawberries. After field work is done, be sure the field has adequate moisture and is irrigated if necessary. Be sure to protect leaves against potato leafhoppers and strawberry foliar diseases.

Raspberries are underway in both red and black raspberries. Japanese beetles are out and can be a problem in raspberries. Growers need to time their controls with harvest. Raspberries are also very attractive to SWD and growers should pay close attention to protecting against this pest. See “Spotted Wing Drosophila Management Recommendations for Michigan Raspberry and Blackberry Growers” for more information.