Very cool conditions will hold insect pests back this week. Blueberries and strawberries are blooming.

Last week was generally cool and dry with highs in the 60s and lows near 40. The weekend was warm. A warm front moved through the region Friday, May 15, bringing rain and warm, humid conditions with highs in the mid-80s for the weekend. Rainfall totals for the area ranged from 0.25-0.75 inches. Passage of a cold front Monday evening, May 18, brought cool, dry winds and no rain. Soils are moist and soil temperatures are in the 60s.

Cool, dry conditions are predicted for the upcoming week with highs in the 60s and lows in the 30s and 40s. There is a slight risk of a frost Wednesday morning, May 20, in northern areas, but it is unlikely temperatures will get cold enough (28 degrees Fahrenheit) to cause damage. Warmer conditions are forecast to return this weekend with rain forecast for Sunday, May 24. Plant development continues to be in spurts during warm periods and slow growth during cool periods. Most trees have leafed out and shoots are developing rapidly.

Note: The Bainbridge and Lawton Enviro-weather stations will be upgraded this week with the installation of new data loggers and sensors. They will be down temporarily, hopefully only a few hours.

The spring growth flush is well underway and lots of new leaves emerged last week. The warm weekend enhanced insect activity. A few plum curculio egglaying scars were found Monday following the warm days and nights of the weekend. Plum curculio is a threat to young fruit when temperatures rise into the 70s. Tarnished plant bugs can build up on broadleaf weeds and become a threat to wing fruit.

Apricots are generally out of the shuck and the largest fruit are about 20 millimeters in diameter.

Peaches are at shuck split or out of the shuck. Growers continue to assess the health of their orchards and their economic viability following two tough winters. Some orchards have been slow to develop foliage. Peach leaf curl symptoms showed up last week. As leaf tissue becomes available, warm and wet conditions are conducive to bacterial spot, a disease of peaches and plums. Oriental fruit moth adults were caught in good numbers early this month and egg hatch is underway. Shoot strikes on peaches should appear soon. Plum curculio and tarnished plant bugs can be serious pests when warmer conditions return.

Apple fruits are 6-9 millimeters in diameter. Shoot growth is 2-3 inches long. Late blooming varieties such as Golden Delicious and Rome are in petal fall and still have a few open flowers on the trees. Some fruit are already beginning to drop. Apple scab symptoms reported last Wednesday, May 13. These are probably due to the April 19 infection period. More scab symptoms from the infection periods on May 5 and May 8 will appear this week.

Insect activity increased with the warm weather. We are catching spotted tentiform leafminers in good numbers and are now at the treatment window for protecting leaves from the first generation of this pest. Codling moth adults have been trapped beginning one to two weeks ago. This week’s cooler weather should suppress codling moth activity. Plum curculio should not be a problem until we get warmer days and nights with the weekend. Cooler conditions should also suppress codling moth, but growers and scouts should have traps out to determine biofix and time their control measures. 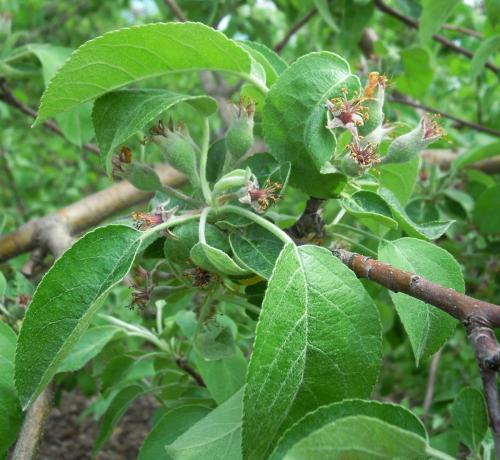 McIntosh apple fruitlets are about 8 millimeters in diameter.

With cool weather predicted this week, it will be a poor apple thinning window. All chemical thinners work poorly under cool conditions. A better window with warmer temperatures will be the weekend when the highs rise into the 70s. The Cornell Carbohydrate Model for the Benton Harbor Enviro-weather station predicts low stress (low demand and high supply of carbohydrate) for the week. Delay thinning sprays to the weekend or beyond. A period of stress is in the forecast next week after May 24. 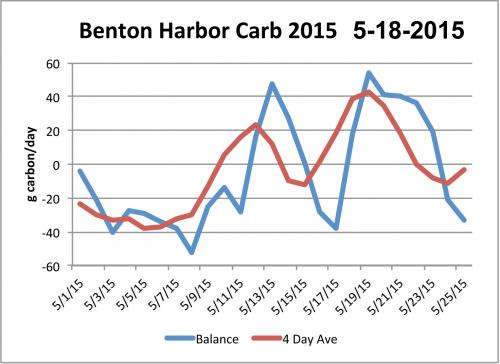 Pears are 10-12 millimeters in diameter. Monitoring for pear psylla now is timely to determine the need for post-bloom chemical control. 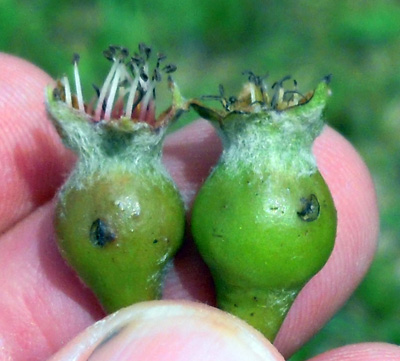 Grapes moved slowly during the week and then moved quickly with the warm weekend weather. Juice grapes are now in the 6- to 10-inch range and flower clusters are elongating in juice grapes. In wine grapes, shoots are in the 3- to 4-inch stage. Growers need to focus on early season disease control. At this time, the primary disease is Phomopsis. MSU Extension advises growers to apply a protectant fungicide or biological material in vineyards affected by Phomopsis before bloom to prevent disease lesions on new shoots. Phomopsis shoot lesions will slow vine growth and worsen next year’s infections.

Powdery mildew and anthracnose may also be protected against at this time, particularly in vulnerable varieties with a history of infection. There is a lot of powdery mildew inoculum in the vineyards from last fall. Powdery mildew cleistothecia produce spores above 50 degrees with any rain. Grape berry moths were out over the weekend. It is too early for treatment. Over the next few weeks, it is helpful to scout tree lines and watch the wild grape vines. Growers and scouts should record the date of 50 percent wild grape bloom. This date can be used several weeks later in the grape berry moth model to determine ideal timing of insecticide application. We are still several weeks away from bloom.

Blueberry bloom is widespread. For most varieties and areas we are past full bloom, which occurred over the weekend. Leaf emergence and shoot growth are well underway. With the widespread emergence of green leaf tissue, winter injury is becoming very apparent. This winter, there was widespread damage to flower buds and affected bushes show varying amounts of bloom. The impact of two cold winters is easy to see on older canes. Older canes that carried a crop but had few leaves last year appear dead. There are a good number of canes showing the same symptoms (heavy bloom, but few leaves and new shoots) this year. Vigorously pruned fields with younger, more vigorous canes do not show as much damage to the canes. Damage varies from region to region. In some sites, there are differences between varieties. In other sites, the differences seem to be between management practices, especially pruning. 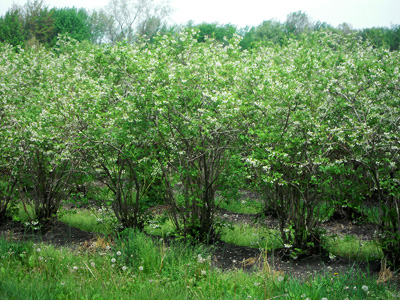 Few mummy berry shoot strikes were found. Bees carry the fungus spores from the shoot strikes to open blossoms and blossoms need to be protected during bloom. See “Protect against blossom blights in blueberries” for more information. MSU Extension reminds growers to avoid pesticide sprays to blooming crops when bees are foraging in the field – even fungicide sprays. Avoid spraying during mid-day; apply sprays at night or during the early morning or evening hours when bees are not active. Galls of stem gall wasp were found on ‘Jersey’ near Covert.

Strawberries are blooming and there are thimble-sized fruit in many fields. Open flowers are killed by temperatures below 28 F. There is a slight risk of a frost in northern areas Wednesday morning, May 20, when winds calm. Remember, temperatures near the ground are much colder than reported temperatures, which are recorded 4 feet above the ground. With wet conditions, growers need to protect open blossoms and leaves. See “What fungicide do I choose for disease control in strawberries?” for more information.

Bramble shoots are 4-6 inches long and flower buds are separating in the clusters. Primocanes are showing good growth with warmer soil temperatures. Winter injury is becoming more apparent. Most blackberry canes were killed to the ground and new primocanes are emerging. Red raspberries show differing degrees of damage to the floricanes with the primary symptom being poor bud growth of buds and shoots from the floricanes. Scout black raspberries and blackberries for signs of orange rust and remove infected plants.

There is NO Monday night meeting on May 26, Memorial Day. Our next Monday fruit IPM meeting is June 1 at Fruit Acres Farms, 3452 Friday Rd, Coloma, MI 49038 at 5 p.m. Two Michigan pesticide applicator recertification credits will be given for these meetings.